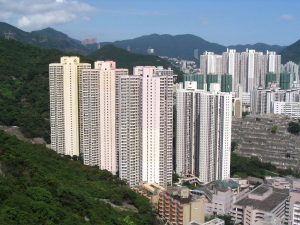 Ms Zen was born in mainland China and moved to Hong Kong with her sibling and parents when she was young. Her family’s living situation and condition in Hong Kong was drastically different from when they were in China. They shared one kitchen and one bathroom with eight tenants and two landlords, and her family of four shared a bedroom of around ninety square feet. A drug addict lived next door to their apartment.

At the time, Hong Kong was still a British colony, but was set to be given back to China in 1997. There was a mass exodus from Hong Kong in the years preceding 1997. Those living in Hong Kong feared Communist rule, and it is estimated that half a million Hong Kong residents left the island between the years of 1985 and 1995. After the massacre in Tiananmen Square on June 4, 1989, Ms Zen decided to leave for her continue studies in the United States with the support of her parents.

The process of immigrating to the United States was not easy. At that time, the US embassy was flooded with people eager to leave Hong Kong. Before going to the embassy to request a student visa for the first time, Ms Zen emptied her closet and packed her bag, expecting to leave that very day. She emptied and filled her closet three times before she was able to secure a student visa. On her fourth try at the embassy, the officials asked her, “What makes you think you will change our mind?” She was shocked to hear that, but felt nothing couldn’t stop her from continuing to try to obtain the visa. She received her visa at the end of August 1989, and left Hong Kong a few days later with a one-way ticket to the United States.

Upon arriving, Ms Zen attended a boarding school in California to finish her high school years. Those years in boarding school were the best two years of her life. It was a fabulous experience for her, despite hardships. Most of her classmates came from families of wealth but she worked throughout high school to lighten the load for her parents, scrubbing toilets and doing other arduous tasks in order to save money. She worked as a janitor to pay for tuition, but her supervisor found ways to make things difficult. The supervisor wouldn’t sign her time card unless Ms Zen smiled or appeared happy. She says that the American students would have coins for their laundry, but international students had their coins for their laundry and their international calls home.

After high school, Ms Zen headed to the great Northwest to obtain her bachelor’s degree. Unfortunately, she ran out of money at the end of her second year. After stopping school for a semester, Ms Zen worked full-time in her last year of college. She would go to classes from 8:00 in the morning to 3:00 in the afternoon. She would catch a ride from colleague to do entry level work at a publishing company from 3:30 in the afternoon to 11:00 at night. Her persistence paid off, and Ms Zen graduated early while holding down a full-time job.

After college, Ms Zen worked her way up within the design industry and ended up in Marketing/Business Development, which led to her into a leadership role in a high-tech company. Ms Zen is grateful that her parents joined her in United States one by one after spending many years apart. She acknowledges that although her journey in the United States has not been a straight line, at the end of the day, there are more opportunities here than she ever dreamed.

This interview was conducted by Sana Khadar, a volunteer reporter for Made Into America.