Leader of the “Colony” 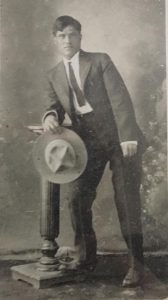 Neither of my parents were of the type that shared much about their growing up in Council Bluffs, Iowa. Both were born shortly before the Great Depression. Pictures of both appear to reflect that they each led hard-scrabble lives. Because they didn’t volunteer much, I wasn’t too curious as we later led our lives from California.

My maternal grandfather is believed to have immigrated to the U.S. through El Paso –  from Michoacan Mexico in the early 1900’s.

Bernardino, who was born in 1886 (DNA suggests he is a son of Juan Espinosa, a lieutenant of Pancho Villa), whisked up my little German grandmother in 1914 in Oklahoma and together they moved to Council Bluffs, Iowa. Their marriage license lists them both as “white”. Together, they raised 14 children. My grandmother adopted his language and culture. The family referred to themselves as Mexican. His last child was born when he was 53 years old. It’s said that he died of ill health in 1958, a year before I was born.

I am fortunate that I have one remaining uncle who is able to share a bit more about “Pa”. Older cousins and one with a full subscription to Ancestry and a keen interest in history have also been especially helpful. More than a just a chronological history, I hoped to gain greater knowledge of what my grandfather was about as a sentient being.

It’s believed he was among a group of 40-50 Mexicans who traveled north to work on the railroad. It was one of few jobs that were offered to Mexicans. Bernardino rose to the rank of foreman, but was fired when he helped an employee in need pad his timecard. From there he went to work in a dusty and dangerous grain silo. His lunch was typically minced ham on white bread with mayonnaise.

My grandfather’s typical day was to rise early before most of the family, go to work, come home, eat and go to bed. Repeat five days a week. The family meals typically started with fresh flour tortillas, beans and butter from their cow; sometimes with fried potatoes. They raised pigs and chickens; my grandmother tended the garden. Housework was women’s work; none of the men or boys helped my grandmother or any of the daughters. The commode was outdoors and my mother tells of bathing in a tub in the kitchen. Neither of my grandparents drove a car. 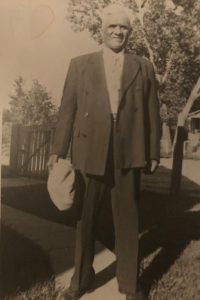 Bernardino was about 5’10”, a stocky man with a strong voice and assertive gait. Both he and my grandmother admonished their children to avoid speaking “Mexican” as they felt that being mixed race children would be difficult enough. He was, however, respected in the Mexican community. Local police would seek out Bernardino to aid in liaising with the local Mexican residents. The police referred to Bernardino as “Leader of the Colony” who hosted parties with a raised Mexican flag and bunting draped across the porch. It seems that he led a colorful life, hosting lively dances at the family home. These festivities sometimes wound up in the news because they occasionally turned disorderly.

Theirs was a home that was well kept and the first to have electricity and a phone. The door was always open to those in need. Two great grandsons would spend time being raised by my grandparents.

Although neither of my grandparents were schooled much beyond their early years, their children all grew up with a powerful work ethic and went on to live comfortable lives.

This narrative was written by Trudy Ellerbeck who is a student at Foothill Community College in Los Altos Hills, CA.