The ensuing stories will follow the trajectories of two different families who immigrated to New York from Eastern Europe at different point in history. They are ultimately connected by marriage, and their legacies live on. 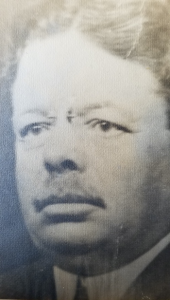 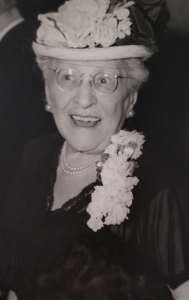 Teddy Roosevelt’s doppelgänger, Nathan Glickman (née approx. 1866; Moscow, Russia) and the ever so regal Fannie Sehoenholtz (née 1870; Warsaw, Poland) sailed across the Atlantic Ocean to New York before starting their family in 1890. They had eight children—only 6 lived into adulthood. One being the eldest, Pauline. Nathan Glickman started a shipping business often taking 18-year-old Pauline to France with him, who would inherit the business a decade later.

New York was bustling with im/migrants coming by land and sea when Pauline married German-born, fiery-tempered, and cigar-loving Eli Frederic Weill. The Weill family and their housekeeper, Mary Adonovich, lived in various places in the New York City metropolitan area. You could find them near the beach in Far Rockaway, Queens too.

In 1919, they gave light to their first baby girl— Winnie. Pauline had her hands full as a bag designer, a shipping business, a family to provide for, and a newborn. Only two months later, she got pregnant again. It was an unimaginable scenario to have another baby so soon. So, Pauline did her research and found a place to get an abortion during a time this was impermissible. She was on her way when she changed her mind. And in 1920, Madeline Weill came into the world as back-room speakeasies were sprouting and prohibition agents were dumping liquor into the gutters.

Not long after becoming a grandpa, Nathan Glickman passed away during a sea-voyage on La France on January 23rd of 1921 leaving the business to Pauline as a means to provide for her mother, 6 siblings, and daughters. Her husband, Eli, suffered a nervous breakdown after his business partner absconded with his entire investment 5 years later.

Meanwhile, Fannie narrowed down her belongings to 3 suitcases. Without the existence of social security at the time of her husband’s passing, she would travel between her children’s homes every few months. Everyone loved having Grandma Fannie’s cooking and when she would stay with Pauline at her home in New York City, Grandma would walk the dog. After a walk in the rain, the dog would come through the door dry because Grandma Fannie kept the umbrella over him instead of herself. Fannie was a loving homemaker until her death at the age of 90. Eli passed within a week and as she had done her whole life, Pauline soldiered on. 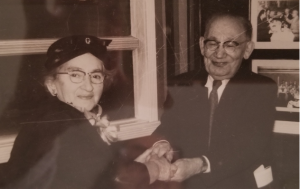 Sadie “The Peanut” Lipschitz, first saw the world with her glacier blue eyes in 1891. In the same south-central city of Kovno, Lithuania her future husband, David Rosenberg, was born ten years prior.

Both Sadie and David came into the world during a critical time in history. The end of the 19th century was a time when many of Lithuania’s Jewish population fled Eastern Europe to escape the large scale, targeted, and repeated anti-Jewish progroms in the Russian empire. And, so, after marriage, their life as Mr. and Mrs. Feinberg was short-lived as they sought their happily ever after far from Kovno.

No passports, visas, or documentation of any kind were required to enter the United States through Ellis Island. Legend has it that Sadie and David were originally the Feinbergs, but hours after docking at Ellis Island in 1903, Sadie and David Feinberg became the Rosenbergs. Why? Well, there are two versions of this legend: (1) David only knew how to say Rosenberg because they were the folks that were going to take them in and employ him, (2) David decided the young couple would have a new identity in their new home. 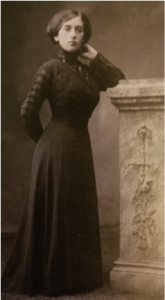 With hardly any money, Sadie and David settled in the Bronx, New York. Soon, their family grew to three boys: Herman, Nathan, and Julius. Bernice would be the long-awaited little sister ten years later.

When World War II (WWII) ensued, Sadie marched down to the draft board determined to be heard. She caused such a ruckus that Herman was not drafted. No one dared anger Sadie at the draft board. Later, Nathan and Julius would proudly serve in the U.S. Army and U.S. Navy respectively.

Sadie was a force to be reckoned with (just ask the draft board), and her spirit was limitless. When the grandkids came to visit, she’d serve them salmon croquettes and peas. She never sat too long; there was always something that had to be done, but her presence was like a safe embrace. West Haven, Connecticut became Sadie’s next home after David passed. She’d now be closer to her children, but especially her grandchildren to whom she’d share accounts of Wright Brothers’ first flight while they watched the moon launching.

It was in New York and the year was 1942 when the star-crossed lovers —Julius Rosenburg and Maddie Weill— fell in love. Against her own family’s advice, Madeline Weill married Sadie Rosenburg’s Julius. The Rosenburg’s were a Yiddish-speaking working-class family, and the Weill family were more well-off.  The Weill’s granted that Julius seemed an ambitious young man. The young couple brought two beautiful girls into the world: Nancy and Jill.

Though the Second World War had ended by 1945, the lasting effect of anti-Semitism was deep for the Rosenburg family. Two of the Rosenberg boys, Julius and Nathan, shortened their last name to Rose. Not long after, the two moved to Connecticut in 1950 with their families to start a storm window factory. Sadie and David remained in a little apartment in the Bronx decorated with lace curtains that their grandchildren recount to this day.

A name change and a move to Connecticut later, a brand-spanking new little brother joined Nancy and Jill. His name is Andy. All Maddie and Julius’ children’s names pay homage to their ancestors. Nancy and Andy were named after members of the Weill family. Jill’s name, however, honors a family member from her father’s side who passed away in a concentration camp.

Jill was embarking on her teenage years at the time of her parent’s divorce. Julius Rose had taken the profit from his storm window factory and looked to his next business venture: real estate. Unfortunately, his investments didn’t pan out the way he had hoped. He lost a lot of money, and this added to the long-brewing tensions between Maddie and Julius.

After the divorce, Maddie bought a little house and continued to work. Like the women before her, she had to provide for her family –Nancy, Jill, and Andy— but not without the help of Grandma Pauline. 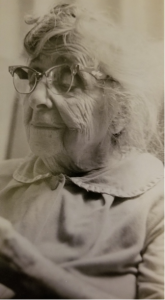 In the summer of 1967, Jill had just graduated high school. Her older sister had long left the nest for college at UC Berkeley, and her younger brother was enjoying his last summer before high school. This was also the summer that Maddie and Pauline made their last and final move. This time, they would try their luck in Sacramento, California.

This is the state that came to know the name and the force that is Jill Rose. Jill continues to carry the dreams of the immigrants who paved the way before her and honor the long line of matriarchs who overcame all odds. Her son’s middle name is Lawrence — after Grandma Pauline Lillian, of course.

In the spirit of the remarkable matriarch bloodlines, she continues the beautiful work of touching people’s lives. Jill helped raise her son, nieces, and nephews to live their authentic selves in multi-racial and gender fluid homes. She taught music for many years in Oakland, California and went on to found the first LGBTQ+ camp in the country. And, now, she’s telling her ancestor’s stories.

The interview with Jill Rose was conducted by Chia-Ry Chang, a volunteer for the Made Into America project.