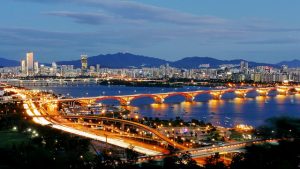 “In just four years in college, I got 26 gold medals!” Simon Park (name has been changed) looked at the people at the table before him in silence, expecting wonder and praise.

“What, did you steal them from first graders?” The table, where Simon’s three sons and wife were sitting, burst into laughter, while he sighed. However, he was happy; happy because of his family, because of his life now, so vastly different from his life back in his birth country, South Korea.
Simon Park was born in Seoul, Korea on March 10, 1962, where he grew up for much of his early life. He was the youngest of 6 siblings. Simon grew up with a largely ordinary childhood, going to school and participating in athletics. His life was not poor, but it did not make him happy either. His mother was the only supporting force he had, and because of his mother’s love, his siblings became jealous. Believing that their mother favored Simon, his three brothers and two sisters constantly heckled and harassed him, “playfully” pushing him around and calling him names.

Simon eventually graduated from high school when he was 18, and his next goal was to attend college. However, many upper-echelon colleges rejected him, seeing his GPA. He did not care much about high school, and did not study, preferring to socialize and play sports instead. As such, he was a “C” student with a 2.8 out of 4.0 GPA. Because of this, he attended a very small, little-known college in Seoul.

Simon, after completing four years of college, wanted to go to graduate school in America. However, many people doubted him because of his previous poor grades. His professors called him a “C” student and said that he would never be able to succeed in America. His friends told him to reconsider and to stay in Korea, a place that he already knew. However, his mother, hearing all of this, sat Simon down and talked to him.

“Simon, people doubt you because you had bad grades. And you had bad grades because you did not study. I believe that if you work hard, you can become a great student. So, I will support you. Keep on following your dreams and do not worry about the money. Remember that I will support you.”
Simon was inspired, and decided to move to America for graduate school. Once he arrived in the Los Angeles airport, he was amazed. The sun glimmered and the air was cool. Unlike South Korea, a small country with too many people to fit, America was grand and spacious. He recognized the opportunity in America, and set to work.

When he first arrived, he did not know any English at all. However, he remembered his mother’s words. He would study English every day after coming back from school to his apartment late into the night, then wake up early in the morning and go to school. In just six months, he became mostly fluent in English, and ended his four years in graduate school with a 3.85 GPA.

A few months after his graduation, he was contacted by a representative from Samsung, the largest company in South Korea. He had looked through Simon’s academics and was impressed by what he saw. The rep offered Simon a stable, high-paying job, with all travel expenses paid for and many vacation days. He eagerly accepted, and returned to Korea.

Simon, while in his Korean college, went to his friend’s house from time to time to work and to have fun. There, he saw his friend’s sister, Mijin, for the first time in 1982. Despite seeing each other from time to time when Simon visited, they did not officially meet until 1989, as Simon was in America in graduate school. In March of 1989, he asked her out on a date, and Mijin accepted. In October 1989, just 7 months later, they became married.

Simon and Mijin lived happily in Seoul, and had two sons, named Tim, born in 1992, and Dana, born in 1995. However, Tim was born with a mental disability, and it took twice the time as the average person for him to move and think. Korea’s disability care program was very poor, and many people, including the counselors who were supposed to help him, looked down on Tim. In one meeting, Simon and Mijin sat down with a disability counselor to discuss Tim’s future, who was 6 years old at the time. The counselor looked at them and said, “Your son will never have a normal life. He will not get a job, he will not have a family. He does not have a future in Korea.”

Just a few months later, Tim’s mother, the greatest positive influence on his life, passed away. She left all her children pieces of her land, which spread across thousands of acres, and gave Simon the largest part, in the middle. He did not have a good relationship with his siblings because of their jealousy towards him. He had nobody but his wife and sons to rely on. Here, words rung in his head: “He does not have a future in Korea”, “Keep on following your dreams”. Remembering the opportunity he saw in America, he wished to go back, this time with his entire family. There, he would have better business opportunities, better education for his sons, and better help for Tim. Without hesitation, the Park family moved to America in the same year.

Simon flew to America first to prepare for their move, and waited for his family. On the day his family was to arrive, Simon sat outside the airport, his foot tapping and his hands twitching. His wife and two sons slowly walked out of the airport, looking at the city of Campbell. Simon looked at his wife.
“What do you think?”
“Well, all the buildings look the same. How am I going to tell which one is the house and which one is the grocery store?”

In America, Simon was elated. His consulting business boomed, and his sons received a much better education than that in Korea. The public education program also offered an intensive, completely free special needs program, so Tim was surrounded by loving, supporting people who cared for him.
On May 23 of 2000, his wife gave birth to his third, and last, son, Neil. This was the happiest moment of Simon’s life because Neil was born an American citizen, and would grow up with the opportunities of America without experiencing the Confucian ways of Korea.

Simon is now 55 years old, and lives in a small town in California with his wife and three sons. His oldest son Tim now has a solid job as a store worker with people who care for him. His middle son Dana attends Stanford University and is pursuing a Master’s degree in Electrical Engineering. His youngest son Neil is a junior in high school and is a prominent musician. He could not be prouder of his family and is extremely happy in America.

This story is based on an interview by the subject’s son, a student at Palo Alto High School.