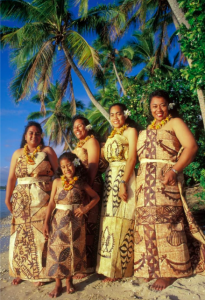 An example of a Teunga Tau’olunga (Tongan traditional clothing for performers).

My cousin arrived with news I no longer wanted to hear about. He told me my visa was approved and that I would be going to Hawaii. I told him I no longer can accept.

The house I lived in was built by my Teti (dad). My teti was a sheriff and was very protective over our family. The island of Tonga where we lived in was very humid at times, and when my siblings and I would get lucky, Teti would give us 50 cents to buy an ice cream cone. Hafua ho kai moe feti. You eat too much, look, you’re fat. My dad would laugh as he told me this. I was a very bright and beautiful young girl. I was and still am a very open book, and man am I good with my hands. I was the middle child of the three siblings. Once I told my husband, him having 11 siblings, it made him laugh in disbelief.

I would always get into fights because people in Tonga liked to pick on my brother, and I would solve my problems with my hands. My older sister would be embarrassed of me because she was part of the school presidents, and it was her job to keep everyone calm and happy. I would even fight boys if I had to. Tuku ho alu o fuhu na ta koe ha taha o ke lavea ulu kovi. Stop fighting people before they hurt you, dummy, my sister would say to me.

The island was very full of life. When you walked by someone you’ve never seen before in your life, you say hi and ask for their names. That is how so many of us Tongans know each other because we always ask for the last name.

When I was around the age of 19, a very close cousin of mine was going around the village to help people apply for their visas to come to America. I happened to be one of the first people she helped. As I waited patiently to hear back from him, time passed by so slowly. A couple years later, in the month of October, my younger brother’s wife gave birth to a son. They named him Lokie (the name of my brother), but my brother and our family had yet to see him because she gave birth to his son in America.

A couple months afterwards, my father had moved on to a better life in Heaven, leaving my mother and my siblings to look after one another. Time continued to pass and I still awaited the approval of my visa, except now I don’t feel as eager to leave. At least not now. Time exasperatedly continued, and I was beginning to see life as my worst nightmare.

My sister-in-law finally is flying down in two weeks, and my brother is the most excited one out of all of us to be reunited with his lover and his child. It was a week before they would arrive at the house. My brother was out celebrating with his rugby team because they had just won a game that night.

We get a phone call in the middle of the night saying that there has been a car accident and they believe my brother was involved. As we rush to the hospital, we don’t get to see my brother until they were ready to announce my brother’s death certificate. This was a very harsh and painful event that crushed not only my sister-in-law and her son, but the woman who gave him life, our mother. She had not only lost the love of her life, but now had lost her only son.

The funeral was that weekend, and my sister-in-law moved their flight to this week. The night of the viewing, I could not recognize my sister-in-law, but for some odd reason I see a little boy in a white jacket that was the spitting image of my brother. It was as if we were traveling back in time, when I was about four-years-old and he was three.

My older sister was given the child first, and all I could hear was a very loud weeping, saying, “Lokie Sio Mai Ko Lokie sii eni Oku Ne Hau.” Lokie please look your son, Lokie Jr is finally here to see you! “Lokie a mai keke talanoa mo ho pepe!”  Lokie please wake up and talk to your baby! Little did I know those words were coming out of my mouth.

The little boy began to cry, looking for his mother. I quickly grasped the child in my arms and began to cradle him. To everyone’s disbelief, the child stopped crying. I began to mourn next to my brother, but when I went outside with my nephew to get some fresh air, the whole front yard and backyard, as well as the streets, were full of rugby players singing to lift my brother’s spirit. I felt overwhelmed to see so many people, and mind you, our house place was very large.

Now there was no way I could leave home now. Maybe not ever. A couple days after we buried my brother, my cousin arrived with news I no longer wanted to hear about. He told me my visa was approved and that I would be going to Hawaii. I told him I no longer can accept. My mother then told me that I had to go because of the million opportunities in America, and that I had the potential and love to do great things in this world. She also told me that I could help the family out so much if I went and found a job down there. But the one thing that changed my mind is when Momma told me to do it for her sake, and to not worry about her and my sister; that they would be fine. So reluctantly, I accepted the visa.

The plane ride was dreadful because I thought so much of home and my family.

At the age of 19 I was able to get my visa approved. I first traveled to Hawaii and I lived there for about six months. Afterwards, I moved to LA, and I stayed there for another six months. After that I settled down for a while in Reno, Nevada, where I met my husband and had my first three children there.

One of the hardest trials I’ve went through is leaving my family. I had to get used to all the fast food restaurants, providing for myself, and learning to survive in a whole new world. Finding a job was very difficult at the time, so I made a lot of fala’s (Tonga traditional cloth) and hand made Teunga Tau’olunga (Tongan traditional clothing for performers) and sold them for money, so that I could provide for myself.

I, along with some friends, would take turns with the VAIVAI (Old Lady) and then split the check 3 to 4 ways. Later my unofficial business grew, more and more people began to see my talents within my hands.

As they would call me daily, asking me if I was able to do this for them at this time, or if I could create this for that time. Over the course of the years, I met even more people through my “job.” I was invited to these weddings, birthdays, anniversaries, reunions, etc. Just to dress up the person I made the Teunga for. 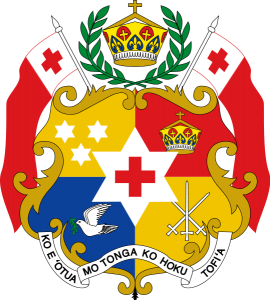 “Ko hai nane ai hono Teunga tau’olunga” (Who made her outfit?) and the people would always say, “Ko Soula pe nane ai.” Soula (my name) did it. “Masii ilifia mua ho nima,” Your hands are very fierce, people would joke.

Nowadays I always talk about my childhood in Tonga. I tend to reminisce on all the leisure time I had that I currently do not have ownership over anymore. Momma always says, ¨Kapau teu mate ave tan´u au i Tonga he taafaki hoku fa´e moe tamí.¨ When I die, bury me next to my mother and father in Tonga.

I talk constantly about how I love my homeland better than the US, because my family, culture, and my heart lie within the island. I talk about visiting the island and seeing my only living sibling. I go on and on about the love, compassion, and life that surrounds this small island. Kohoku mafu e nofo ia i Tonga. My heart will sustain in Tonga for eternity.

This story was written by the immigrant’s daughter, Talita Falepapalangi, a student in the Bay Area.