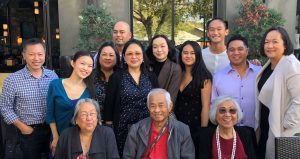 Mylene Madrid is a first-generation immigrant from the Philippines who arrived in the U.S. when she was nine with her mother and two sisters. Her kindness, compassion, and motivation to make the U.S. a safe and welcoming place for communities that are struggling for a new beginning in this country is both inspiring and relatable.

Mylene’s father first arrived in the U.S. to complete his Ph.D. in Oregon. He had worked as a college professor in the Philippines. A year later, the family joined him in the U.S. while he continued to pursue his education. The family left the Philippines to guarantee a better future for their daughters in the U.S.

Upon arrival, the family experienced culture shock, significant language barriers, and lack of health insurance. Throughout her childhood, Mylene also remembers not being able to integrate into American culture quickly, feeling like she would fall behind in school if she did not learn right away. In an effort to support her integration, her parents did not encourage her to continue speaking their native Filipino dialect.

Eventually, the family moved to Vallejo, California where Mylene entered the tenth grade, experiencing yet another culture shock. While Vallejo was very welcoming to both her and other family members, it was an adjustment. Fortunately, Vallejo was academically driven and they did not experience racism like her father had while living in Oregon. Mylene remains grateful for the sacrifices her parents made to ensure her future, and the impact of that gratitude is relatable and powerful.

While navigating the pressures of assimilation, Mylene’s appreciation for her family’s cultural traditions remains strong and revolves largely around family gatherings and sharing native Filipino food. She emphasizes gratitude and music as important cultural traditions that were brought from the Philippines. She also emphasizes the importance of maintaining harmony among the family, along with creating respectful and welcoming spaces for everyone. The cultural dances she learned as a child before migrating to the U.S. are also aspects she holds dear.

Mylene’s journey eventually led her to work in the public health sector for several years where she has worked in multiple departments helping the refugee and immigrant communities. While working for Santa Clara County, Mylene has served on different committees where she has focused on cultural competency to improve the quality of life for all immigrants and refugees arriving to the County. The refugee programs that she has advocated to maintain have helped many refugees find resources and other necessities.

Regarding her long-term career, Mylene remains grateful for the women mentors she has had over the years, as they have shared wisdom and provided inspiration for her ongoing work. She is proud to serve as Chair for the local World Refugee Day planning committee and looks forward to continuing her social justice work for years to come. Mylene believes that adequate education and employment opportunities should be provided to the community by highlighting the importance of changing the refugee narrative of misconceptions that is erroneously perpetuated. She continues to advocate for accepting and welcoming refugees into all communities and remains committed to supporting them in their transition from their difficult journey toward arrival in the U.S. Mylene’s dedication to the causes she is committed to are commendable, inspiring others to pursue their dreams of helping others make the world a better place.

“Approach everyone with kindness because you don’t know what they’re going through.”

Andrea Castro is a 30-year-old graduate student in the Justice Studies department at San Jose State University. She is a prison educator and youth mentor.