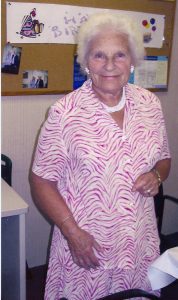 Helga Newman recalls the day in March, 1938 when her family’s life changed forever.  She lived with her parents and grandmother in Vienna, Austria and that day she watched through the window as the Nazi army marched into her city.  Her father warned her to stay away from the window for her safety.

When Hitler, arrived he began creating restrictions on Jewish families. Soon, Helga’s father lost his job as a bank manager and later they were restricted from entering certain stores and  public places. Later, that year, 9-year-old Helga was sent by her parents on the Kindertransport program to get out of Austria.

As she was being dropped off at the station the SS officers gave them instructions to quickly say their farewells and leave. Ms. Newman recalls that her family left immediately while the other families ran onto the platform of the station instead of leaving. She turned around and cried out for her father but he was long gone. Helga was nine and totally on her own. 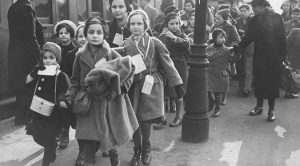 Viennese children arrive in London on the Kindertransport. Photo courtesy of the Austrian National Library.

The Kindertransport took her to London where she was picked up by a friend of the family.  The friend was working as a maid and convinced her employer to allow Helga to stay with them. Two weeks later she got scarlet fever. Helga spent six weeks in the hospital where she was able to learn the English language. Later, she returned to the home in London for another month. A day before the war began, Helga was evacuated to a safer part of the country.

to take in. She was chosen first by a woman in Broughton Gifford, but spent time in four other households during the years of the war. When the war ended in 1945, Helga was able to reunite with her mother.  Throughout, the war her mother was living in London with her brother. She was working sewing canvas cots for soldiers. She’d been able to communicate with Helga through letters during the war.

A year, later her father joined them as well. He had escaped Austria to Yugoslavia and eventually made it to Italy. Unfortunately, Italy was allied with Nazi Germany and he was caught and jailed in Italy. When the war was nearly over the prisoners were lined up by German soldiers and every third or fourth prisoner was shot to death. Miraculously, her father was not shot. The prison guards ran off days before the Allied Forces arrived and  he escaped the prison. He was hidden by an Italian family for a few days and soon he was a free man.

He got a job at the British Officers’ Club in Italy, not knowing if his wife and daughter had survived the war. He wrote to his brother-in-law in London and found out they were alive and living in London, so the family was reunited there.

In 1952,  at age twenty-two Helga was sponsored by a cousin to immigrate to the U.S. Her parents encouraged her to go and explore the country to see if it could be a good home for the family. When she first arrived, she noticed how the statue of Liberty was green instead of white. She also recalls, how she spotted all the colorful cars and thought they were cabs but they were actually private cars. In addition, she noticed all the goods that Americans were able to purchase at their local market. Back in London, although they won the war, there was still rations on food items.

Helga settled in Albany, New York where she worked as a bookkeeper for nine months. Later, she went to Milwaukee to visit her uncle’s family. After, a year in Milwaukee she returned to New York and worked in a large accounting CPA firm. Throughout her time there, she did most of the work from the payroll, to department manager, until the company merged with a larger company. At that point Helga decided to leave.

In 1954, her parents immigrated to the US from London and moved in with her. Her father worked as a bookkeeper for various companies and her mother was a saleswoman at a large department store.

In 1955, Helga got married. She and her husband had two beautiful children – a boy and a girl. Now she has three grandchildren.  In 1982, her husband passed away. In 2002 she moved to Sunnyvale, California.  A couple of years later, she moved into the Moldaw residences for seniors in Palo Alto.  Helga serves as the financial secretary for Kindertransport Association.

This interview was conducted by Maria Vazquez.