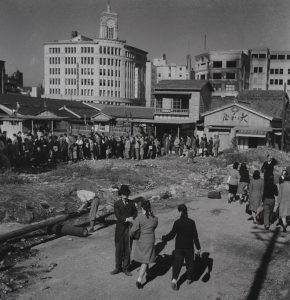 Sirens blaring, fighter planes soaring, and the cries of thousands, this was the everyday life and struggles of Japanese men, women, and children. It was a life filled with bombings, hunger, and loneliness. My grandmother, Kimiko, was just five years old when World War II broke out. It was one filled with terror and misery, a world in which children would go to bed every night not knowing if it was the last.

When 1945 came along it brought happiness and sorrow, gratitude and despair and so much more. It marked the end of a long and bloody war that affected so many families in Japan. For many when the war ended it became the first time in years that people could live without fear or terror. While the war might have ended, the devastation had just begun, it marked the beginning of famine and death. The Japanese population was left without food, medicine, or money.

My grandmother grew up in Tokyo and lived there until she graduated from high school. Growing up my grandmother lived with her father and mother along with two step-siblings and a little sister. My grandmother’s family was hit hard in 1945, at the age of five, my grandmother’s little sister passed away from whooping cough. A disease that is very curable if you have access to medicine. Simply put the people of Japan “had no access to doctors or medication” after the war ended. They were left alone to fight and fend for themselves.

As the years ticked by, life went back to normal for Kimiko. She went back to school, played sports, and graduated from high school. Life after high school provided her with a new opportunity and outlook on life. She had a remarkable chance to study abroad in America for two years at the University of California, Los Angeles. While studying at UCLA my grandmother met Robert “Bill”, her future husband. Bill was able to relate to the struggles of trying to conform to American life since his family immigrated to the United States from Prague the former capital of Czechoslovakia and later became American citizens.

After her first two years abroad, Kimiko returned to Japan to finish her final two years of college. After leaving UCLA she was able to keep in contact with Bill after returning to Japan. Sometime later, Bill was able to join her in Japan after getting a job working with Mitsubishi. After that life moved pretty fast, within the next few years the two were married in Japan and made plans to return to America. Right after arriving in New Jersey in 1962, my grandmother got a job working as a bookkeeper, and then later got promoted to an accountant. Shortly after returning to the United States, they started a family and had two sons in as many years

After almost five years of living in America, my grandmother finally had the chance to complete the transformation to become a true American, she was granted a citizenship. It took her five years to have the same privilege as her sons and her husband, to have the same right to vote for what she believes in. Not long after becoming an American citizen, both she and her husband found jobs in civil service, for the United States Department of Defense.

Today she lives in Washington State and gets to enjoy her life, fulfilling this so-called American dream that we all strive to live. Not one of becoming enormously wealthy and living in giant mansions, but instead one filled with family, love, and happiness. Nancy, who is more affectionately referred to as Obachan by her five grandchildren has completed and fulfilled her American dream and will now pass it onto the next generation of dreamers.

This story was written by Kimiko’s granddaughter, a high school student in Palo Alto, CA.