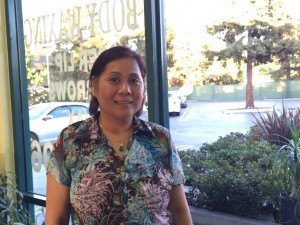 They waved glow sticks to attract the attention of anyone who could help them. Thai pirates also prowled the waters; there was always a feeling of imminent danger.

Walk into Hair 7 Salon, and you’re greeted by a small jade statue of the Buddha on the front desk. Hairdressers are quickly snipping and cutting while chatting with their customers. Kim Thanh Tran is the owner of this salon. Born in Vietnam, her journey to the United States spans many years.

Kim was born into a poor family in the countryside of South Vietnam. Her father worked as a bus driver while her mother sold merchandise. Out of eight children, Kim was the third oldest, therefore assuming great responsibility. She practically raised her youngest brother on her own. When she was eight years old, her parents divorced. Her dad gambled and was an irresponsible father. Kim started working the same year. She sold vegetables on the street and carried water in buckets to her house.

It was during Kim’s childhood that the conflict in Vietnam was growing. She knew there was trouble, but the details were vague. North Vietnam was dominated by the Communist party, and South Vietnam was considered pro-American. Her family wanted to leave Vietnam by boat before the North Vietnamese Communists invaded, but they were unable to get out then.

In 1983, Kim’s grandmother sold almost all of her gold to pay for the family boat trip to Thailand. The family split into three groups. One group consisted of Kim’s father and two of his sons. The second group included the oldest daughter and two younger daughters. The third group consisted of Kim, then thirteen years old, with her eight-year-old sister and four-year-old brother. Her mother did not leave Vietnam with their family. Nor did her mother tell Kim that Kim would be leaving the country permanently. Kim believed that she was going on a trip to visit a relative and would return home in a few days. At that time, it was very dangerous to flee Vietnam. If the police found out, you would go to jail. Parents did not tell their children the truth about fleeing Vietnam for fear of the kids letting their story slip.

The boat trip was two days and one night in grueling conditions. Some of the ship’s mechanisms broke, so all food and water supplies were lost. The passengers drank seawater to compensate for their lack of fluids. They waved glow sticks to attract the attention of anyone who could help them. Thai pirates also prowled the waters; there was always a feeling of imminent danger. It was estimated that seventy percent of the passengers died during that short journey. Kim survived.

After the ship arrived on the shores of Thailand, the Thai sent them back out to sea. They even punctured a hole in the ship so that water entered inside and the ship began to sink. The water inside the boat was up to the passengers’ waists. Some people used buckets to pour out the water, while others jumped into the ocean and tried to swim to shore. For an unknown reason, the Thai police rescued them and dragged them back to shore. The police told all the boat passengers to kneel in a line across the beach. A gun was pointed at the forehead of each of those passengers. Kim thought she was going to die. She said that the religious people prayed and prayed loudly, hoping to be saved. While they were praying, a helicopter flew by in the sky and signalled the impending execution to stop. Because of this experience and a religious childhood environment, today Kim is a very religious woman.

After the boat passengers were rescued by the helicopter, Kim stayed in a Thai refugee camp for two years. There, she went door to door selling vegetables and cooked to earn money as well. Her family slept on the floor of their space in the refugee camp. Embassies from foreign countries came to the camp to interview refugees and decided if they would accept them into their country. Kim’s father had worked in the South Vietnamese army with the Americans before 1974. After the American Embassy representatives interviewed him, they accepted him and his family into the United States.

The family stayed in Thailand for a few more months before being transferred to Indonesia to learn about living in America. In Indonesia, Kim’s family took classes eight hours a day, five days a week. They learned how to take a bus, go to school, how to work in an office. They also learned English here. Kim was now seventeen years old.

After living in Indonesia, Kim’s family moved to San Jose, California. Kim attended two different high schools in the Bay Area. She could only take the ESL and math classes because her English was not advanced enough for other classes. Kim did not graduate high school because she was above the age limit, so she continued her education at the local adult school. One day, she was looking in the newspaper and noticed that there was a scholarship program looking for students like her. She applied and attended a beauty school in Mountain View on that scholarship. She trained with a license for a few years and then opened her own hair salon in Mountain View, California.

Anyone reading this story knows that Kim has had an immensely difficult past. She says, “I’m not smart in school, but I’m smart in life because [I’ve lived] a hard life.”

Kim was interviewed by Sana Khader, a high school student volunteer for Made Into America.