Kenyan with 2 Legs and a Dream 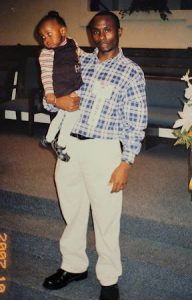 In the beginning, I grew up in a family of 11 with only 1 working mother. In order to keep her children healthy and alive, she had split us up to go live with her other family so that she could take care of a portion of us. I was one of the bunch and had lived with my uncle who is still alive today. My uncle took care of me as much as he could and I did as much around the house as I could to help.

At this time I was good at running and trained myself every morning till the afternoon just running. I had received a lot of attention and gained a manager who helped me train harder and get faster with my talent. Although this manager was not really nice, he was the type to like you if you make money. He only saw his trainees as walking ATMs that gave him what he wanted so I never really had a good bond with him unless I ran well.

As time went by, my manager gave me an opportunity to run a race in Arizona to hopefully start making more money. I never thought in my life that I would be able to go to America, especially since my family was very poor. When I first arrived, I met an American who welcomed me to Arizona and made me feel like I wasn’t out of place in America. He helped me explore the opportunities in America and then I made the choice of starting a new life in California. (One of my friends had convinced me).

I did not go back to Kenya but instead went to California and I was basically on the run to reaching my american dream. When I got there, there were a lot of different things compared to Kenya. There were actual toilets! We didn’t have toilets in Kenya because of how poor we were and Kenya is not really advanced in a lot of things since they were still recovering from British control. I landed in the Bay Area and began to run more to get trophies and money. I was living with my friends from Kenya and I had lived there for a little while.

As I began to familiarize myself with California I then began to work at a small coffee place and was earning minimum wage for multiple hours so I had to work there AND run at the same time to earn more money. As I stayed longer I began to learn more English and I had met other immigrant Kenyans who had tried making a life as well and we became good friends with them and are today now like my brothers and sisters.

Years later, I then met a Kenyan woman in 2004 at a local Walmart where we both had found out that the other was also Kenyan. We began to get closer and by 2005 got married. A year later we had our first daughter and that’s when the troubles of being an immigrant started. Since we were both first parents and had no expertise in taking care of babies we didn’t know exactly how to do things when caring for a baby. All we knew was, “We need to make money so she can eat, have clothes, and have a roof over her head” so our plan was one parent takes care of her while the other is working and once that parent finishes their shift, we meet at the parking lot, a tired parent takes the baby and the other goes to do their night shift. That being me.

That cycle would continue like that till I got older. Fortunately, a year later I had a son and had made the job a tad bit harder. Okay I lied–a lot harder. Since I had a 1 year old that still had to be watched, there was also a newborn that needed full attention. Being an immigrant makes being a parent difficult because it was hard to get a job without papers and even though we did get jobs we would not get enough money for a family of 4. I then had to stop my running career and finally leave my toxic manager to take time to do work and take care of my 2 children while trying to manage my job.

Today, I am now living in Oregon with my youngest son who is 2 years old and my auntie who migrated from Kenya as well. I have come a long way with being in America but after 10-12 years of being here I finally got my papers and I can live my life here better than I was before. Although I am now a registered American, I still get problems from the government today but I will do what I can to keep my life happy and peaceful.

The interview and narrative were done by Ashley, the Immigrant’s daughter.