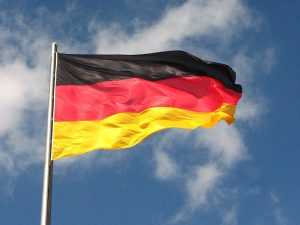 This is the German flag. Creative Commons image

It was a cold winter day, and I woke to the warming rays of the sun shining down through a small skylight, and the clinking of plates as my mother prepared breakfast. Wrapping the blankets tightly around myself, I struggled to leave the warm embrace of my bed. As I finally pulled myself away from my bed, I looked over to the bed next to mine, and found comfort in knowing that I was not the last person up. I could see tiny strands of black hair jutting out from underneath the covers, and the shape of a body could faintly be made out in the covers. After slipping on my shoes, I stumbled out of my room and made my way over to the stairs. From here I could see all the floors of the house, each one with different carpets and furniture. As I proceeded down the stairs I could hear the sounds of the wood creaking under my weight, and with each step memories flooded to mind, taking priority over my thoughts. After all, this was the last time that I would walk down these steps and the last time I would feel the smoothness of the worn out railings.

As I came to the bottom of the steps, the room expanded and split into two. The room in the front was the dining room with a giant redwood dining table in the center, with a crystal chandelier looking down onto it.  There were 8 chairs around the table, and seated at the chair closest to me was my mother. She was still in her grey silk pajamas, with a book in one hand and with the other shoveling eggs into her mouth. She looked up from her book and paused, “Guten Morgen mein Kleiner,” she said in a soothing tone. Which means “Good morning my little one” in English. I smiled and replied “Good morning mama.” I sat down at the table where breakfast and already been laid out for my brother and I. Eggs, bacon and toast, not really my cup of tea but I wouldn’t complain. Almost finished with my breakfast, my gaze drifted from my breakfast to the dark doorway, where in a couple hours, men would come through and pack up all we owned and ship it to America.

On Tuesday, the 5th of June, 2006, I Karel (Name Changed) would board a plane, with my mother and brother, headed for the San Francisco International Airport, leaving friends and the life I once had for something new and exciting. My father had already been in the States for work and had bought us a house, so really the only thing that I had to do was just get on a plane. The change was hard for me but in a different way. In Germany I grew up speaking English and went to international schools, so there was no language barrier like there was for many other immigrants like me. For me the challenges of immigration came hand in hand with my dyslexia, making it harder for me to learn, and adding another item to the list which kept me isolated from the rest of my class. In school it was hard for me to make friends and thrive; as I said before, my dyslexia and social class left me separated from my peers. My early school years were extremely hard because of these two things and left me feeling displaced and alone.

In my early life in the U.S., I would often blame my parents for my social dysfunctions, saying, “If only we hadn’t have moved, then my life would be so much better.” It was not until my later days in life that I truly understood why we had left Germany for this less than great place. Looking at the education system I finally understood, the German public education system does not offer any kind of support for children with ‘disabilities.’ So coming to the U.S. was not only a good choice to try to keep the family together, but it was also the right move for my education.

This story was written by a family member of the immigrant, a student in the Bay Area.