Journey to the West (China) 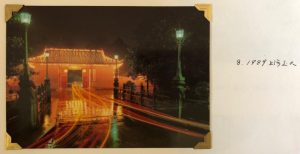 Saved in a family album for many years, this photo shows the entrance gates to Jiaotong University.

On June 4th, 1989, Chinese troops stormed through Tiananmen Square in Beijing, killing students protesting for democracy. An estimated 10,000 civilians died when the Chinese government used violent repression in response to peaceful protest. The Chinese government, however, still denies that this event ever happened, and an entire generation of Chinese children lives unaware of this incident known as the Tiananmen Square Massacre.

My father was one of millions who joined the Chinese Student Movement to protest corruption. From April to June of 1989, he participated in pro-democracy demonstrations and was part of a team of student volunteers that helped nourish the students on a hunger strike in front of the Shanghai Municipal Building.

In April of 1988, my father was a freshman enrolled in the top program at one of the best-ranked universities in Shanghai, China. He was on track to finish his undergraduate degree in three years and his masters in five, taking rigorous courses with prestigious tenured professors.

That June, he could only experience shock and disbelief when the news of the government crackdown reached him. He couldn’t believe that the government would go so far as to open fire on its own citizens, much less its own students. Especially since the government propaganda expressed that it would forgive students for their naivete, the direct contradiction of its promises by its use of military force served as a rude awakening. The government crackdown seemed to worsen day by day. My father was forced one day to write an essay denouncing the student movement, so he submitted a word-for-word copy of a state newspaper editorial, as his gesture of defiance. Only nineteen years old, he made up his mind to emigrate from China as soon as possible.

After a lengthy process to secure his student visa and obtain the necessary approvals, my father arrived in the U.S. in September 1989. Leaving his life as one of the top 0.001% students in China, he attended a regional college in Minnesota because it was too late for the application deadlines of most American schools. He was extremely grateful that he was admitted, however, because this small school gave him the chance to secure a student visa to enter America.

My father didn’t know what America would offer him; he only knew what China wouldn’t offer. He was looking for stability and fairness where if he worked hard he could be successful. In the Chinese society at the time, the only way to success was through corruption and nepotism. Although he was a top student, he did not see a future for himself if he remained in China.

Leaving for America was his first experience of air travel. He would not see his parents for many years since then. His father, who frequently traveled for business, advised him to drink wine on the plane so as not to get sick. After his international flight from China to Los Angeles, he passed through immigration check and took a domestic flight to Minnesota. He requested beer so as to make his trip more comfortable, but on domestic flights alcoholic beverages were not complimentary. Thus life took a drastic turn. Instead of thinking about academics and politics, my father needed to worry about survival and money for rent, tuition, and simple living expenses.

Stepping foot on American soil for the first time, he was struck by how new everything was. The sky was the bluest he’d ever seen, the doors opened automatically, and the cars zipped by so quickly. Passing by a car dealership, he felt a stark contrast between China and the U.S. when gazing at the flying American flags. Less than 20 hours ago, he was surrounded by stifling red Chinese flags; looking at the American flag, my father felt confident that he’d succeed in this country regardless of what obstacles he would face. He felt  free–almost too free–when he looked upon the blue and white colors on the flag compared to the heavy blanket of red on the Chinese flag. With so much freedom, he realized, he had more responsibilities; this freedom, however, gave him such a huge political and social relief that he could not be bothered with any anxieties about what obstacles he would face.

One month later, my father bought his own car–a pale blue 1977 Chevrolet Caprice Classic. This car was so big, he almost felt like the inside was that of a boat. Feeling like a rich man, he could finally travel on his own in the cold Minnesota weather. Living for months on the lowest-priced foods in the grocery store–cabbage, eggs, and chicken–my father began his life as a student in America. After a year of attending the regional college in Minnesota, he moved to Texas and attended one of the top ten undergraduate programs in the U.S. where he pursued a degree in Computer Science.

In 1993, my father got his Green Card and finally felt secure in his life in America. He found his passion in software engineering and slowly but steadily began paying off debts. In 1998, ten years after immigrating to the U.S., he applied for U.S. citizenship with no hesitation. From then on, he voted in every single election, grateful for this freedom that he did not have in China.

Every step towards American citizenship was difficult, and it was only through persistence and luck that my father was able to become a proud citizen with a family and a job he loves. From the age of nineteen to now, he always believed that there should never be a single end goal in life, including permanent residency or citizenship. It is the pursuit of happiness and the confidence in one’s own personal belief system that makes life worthwhile. Although his life in China may have come with fewer economical hardships, the difference in his psychological well-being far outweighed any difference in material possession.

This story was written and recorded by a student in Palo Alto.