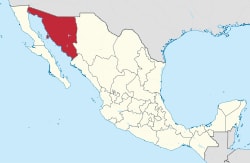 Rodolfo Vazquez was a kid, in a family of three boys and two girls.  He grew up in Sonora, Mexico in the city of Obregon. At the age of 15, he started to work with his dad, helping him building houses near his house.  That’s how Rodolfo started to get experience in building structures. At the age of 19, he met a girl in a neighborhood where he was working with his dad building a house.  They both started smiling at each other and later that day Rodolfo talked to her.  They talked about a lot of things like where Rodolfo lived, where they want to go when they were more older, and what their dreams were. Rodolfo said that he wanted to go to the United States to have a job in construction, where he could get good money to bring to Mexico. The girl’s name was Margarita.  She said that she didn’t imagine herself living in U.S. because of the language, and her family and friends. They kept talking every weekend, when Rodolfo visited her 40 minutes away from his house, until one day Rodolfo decided to make a change in his life.

He decided between staying in Mexico with Margarita or going to the U.S. to get a job opportunity in construction. He decided to go to U.S. and then after a year or two, go back to Mexico for Margarita. He told Margarita about it and he said that when he came back they will get married, she cried a lot when he left but she always loved him in those two years.

So there was Rodolfo, with some money and contacts to make his way into the U.S. So he packed up some cloth, a little bit of water, and 2 sandwiches. That was in the year of 1981. Rodolfo had to stand the stifling heat of August from Sonora all the way to Arizona where he met with a friend and lived with him for a couple days, and then left again to Washington D.C. where he had a job to construct a building. Then he went from job from job. He lived in a little apartment that a friend got for him; he worked two entire years and the amount of money that he earned was enough to get a house and a car for his future wife in Sonora. So he went back to Mexico and married Margarita two weeks after he arrived. They had a really beautiful wedding, in the same church that Margarita’s mother got married.

To save some money, Rodolfo built his own house with the skills he got from Washington and then bought a car. After two years of living together, they decided to have their first baby, a girl that they named Mireya.  Then, two years after that, they had a boy named Rodolfo Jr. and then six years after they had another girl named Roxana. Nowadays they live all in Phoenix, Arizona with a whole new house and a whole new life.

The story of Rodolfo Vazquez was written by his grandson, Fernando Vazquez.