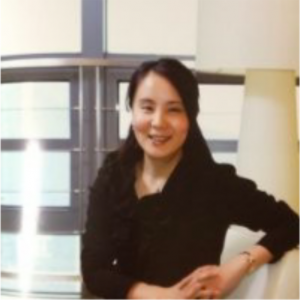 A beautiful picture of my mother; her greatest picture, as it is the picture she used on magazines and on LinkedIn.

Realizing that my kids grew up without much love from me, as a mother, I decided to move to America.

Squeezing through the tight aisle of Boeing 767, I found seat number 27F and sat in the little chair. My name is Jennifer Jin, a person who dreams of advising and supporting others with patience and a faithful heart. I settled in Palo Alto with my husband and two children, Albert and Jessica, to support them with better education.

I was born in Nanning, China. I lived a simple life like others, as I lived with my parents and went to the only school in the village. I was lucky as my parents decided to invest most of their savings for me to go to college. As an obedient kid, I studied hard and did not disappoint them; I got accepted by the only college in the city as a top ten student. I found a job in the Motorola after college and they gave me an opportunity to work in America. I earned my master’s degree and got promoted to Human Resources manager, which is my dream job. A few years after, I married Fang and gave birth to Albert and Jessica. However, I did not want to stay in America as I still have my parents back in China, which is why I went back to China with my family in 2002.

In the next dozen years, I went out for work early in the morning and returned home very late. Realizing that my kids grew up without much love from me, as a mother, I decided to move to America, which will provide a much better education for them and give me a chance to experience the life of a housewife to fully commit to supporting my children.

In 2014, I arrived to Palo Alto, California, with my family. The journey was tough as I had never sat in a tight seat on a plane for thirteen hours straight. The plane was delayed three hours due to terrible weather in Beijing, and the plane had encountered several irregular airflows. Upon arrival, I drove us to the house I bought in Palo Alto with the Acura I bought during the planning of the trip. I took a few days of rest because of the jetlag and a whole month to organize the new house.

Kids soon began their high school life in Paly, and Fang founded a small business with his friends. The life as a housewife was much more relaxing, however, my mind kept telling me to find at least something to do. The result, on the other hand, was not satisfying due to the fact that I still don’t have a green card, which means that I will not be able to work in any American organization. Surprisingly, I found a running group, Burn, that meet and train almost daily. Albert and I joined the group, began training for running, and soon completed our first marathon, California International Marathon, in December of 2016.

Now I’m overseeing renovation of my house, but because my clients for my small business as a CEO advisor are all in China, I get to experience the life of a housewife in America and still travel back to China every month where I not only coach my clients, but also visit my parents, who will soon move to America as the air quality in Beijing is threatening their health status.

This story was written by the immigrant’s son, Albert Lee, a student in the Bay Area.