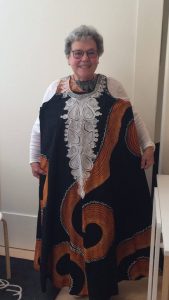 Jean holding up a dress made out of dashiki wear

Jean Lythcott was born and raised in England. In her small village, they spoke a dialect, and soon became bilingual speaking English at school, and dialect at home. She went to college, and she graduated with an honors  degree in Botany with Chemistry. She became a teacher, and taught the sciences in secondary school for two years in England. One day, a job posting to teach in a foreign country, caught her eye. 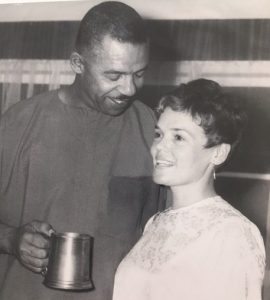 Christmas in 1966, almost a year after they got married

In the early 1960’s, in Ghana, Ms. Lythcott taught the sciences and math to selected students in a very rigorous one-year program, preparing them to join a nursing-degree program. Ms. Lythcott met an African American doctor, George I. Lythcott M.D. who was helping the government of Ghana create a National Institutes of Health. Jean and George got married in 1966 in Ghana. He then moved to Lagos, Nigeria as the regional director of a United States AID program helping 20 West African countries to eradicate smallpox and combat measles. In 1967, in Lagos, Jean and George had a beautiful daughter named Julie. 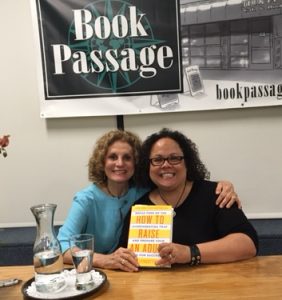 In 1969, George was appointed to be a Dean at the medical school of Columbia University, New York, and the whole family moved to the U.S.  They settled in a 21-story building that belonged to Columbia University in New York City. It was located at 560 Riverside Drive, on the corner of 125th street, the famous borderline of the African-American community in Harlem.

Jean shared a very interesting experience from her first days in New York. She had been living in West Africa for about seven years. All her clothes were made of the local, Dutch wax print material that had become a favorite in the USA as part of the Black Power movement’s dashiki wear. Also she had a dark tan. In a building full of Columbia University faculty and staff, she wondered why people were being so standoffish. One day, a woman approached her at the children’s wading pool and they began to talk.

Over the next several conversations she told Jean that everyone in the building was intimidated by her. They saw her dashikis and the fact she had a dark-skinned daughter with an Afro and thought she was part of the “Black Power” movement.  Jean was astonished.

In Ghana and Nigeria George and Jean experienced discrimination from many light-skinned colleagues who disapproved of interracial marriages. Jean was already well practiced at not letting small-mindedness affect her own self-image. 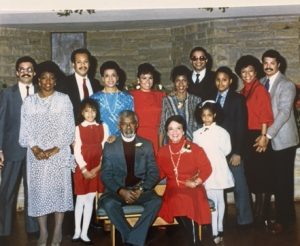 Family at 20th wedding anniversary,where they renewed their vows (Jean’s son in law Lan and his wife were in England)

Over, the years Jean has achieved many great things in the U.S. She was a professor at Columbia University for seven years until her husband was diagnosed with cancer. They both moved to Martha’s Vineyard in Massachusetts, where she and George lived their last moments together. On the small island, after George died, Jean became a founder of the Martha’s Vineyard Charter School. Jean taught both the math and science classes for about four years and then moved to California to join her daughter and family. In Palo Alto, she taught at Stanford University as an instructor for science education for science teachers-to-be in the Masters, Stanford Teacher Education Program. 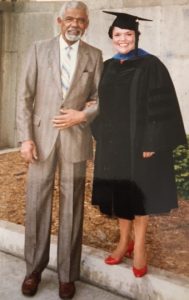 1987,George and Jean when she received her PhD

This interview was conducted by Maria Vazquez of Dr. Lythcott who lives in Palo Alto. She is now retired from full-time work but is called on often to contribute to classes for science teachers at Stanford, for the State of California, and for community organizations.