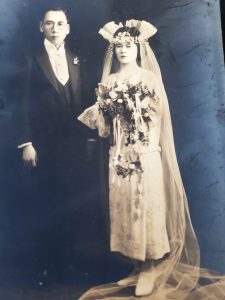 I am a fifth generation Japanese-Hawaiian child with not so many connections to my past. I had asked my mother who my family was and to my surprise, she told me about the history of both her side and my father’s side of my family. Like myself, she didn’t have any knowledge of life outside of the United States, but my mother did know a lot of the history of who my family was. Both my mothers and fathers’ side of the family moved to native Hawaii around the 1800’s. On my mother’s side, I was told that my great grandfather came from Japan on boat in hopes to look for work. He and my great grandmother immigrated to Hawaii in hopes to find work and a new life. Although Hawaii was not yet part of the United States, my mother’s family had come for a new life, trying to make the best of their lives. My great grandfather worked as a rice patty farmer.

Another important part of my family history is that they were impacted by World War II. During the second world war, my family was in the Japanese internment camps. I recall my grandparents discussing different sides of this story when I was growing up. My Grandmother was sent to Topaz, Utah with her family and my grandfather was sent to Tule Lake in California, where many Japanese American citizens were incarcerated and considered questionably loyal to the United States. My grandmother told me stories about how the internment camps had stripped her family of all the business’ that her family owned. That after the interment camps, her family had struggled financially and had been severely impacted by the other citizens simply by being Japanese. My grandfather told me stories about how he snuck out at night in the internment camp then crawled under the chow hall to push out loose floorboards and take extra food. Despite all the mistrust placed on him during World War II, my grandfather along with two brothers all enlisted into the army during the Korean War. My grandfather never spoke to me much about what happened during the Korean War, he only mentioned that he had a hard time adapting to a civilian life for years after the war.

After being released from the interment camps, my great grandparents on my father’s side had sent my great uncle (My grandmothers’ brothers) back to Japan to seek a better life. While the exact reason was never given, I cannot help but think that my great grandparents had sent their sons back to Japan because America was not the utopia that they had originally come for. They sent one brother back home to Japan to seek a good education. They did not really keep in contact with him for that and he had resented his parents for that for quite some time after that. He and my grandmother finally reconnected a few years ago before my grandmother’s passing. During that conversation, her brother did admit that he was a bit resentful of his parents for sending him away to Japan on his own and a bit angry and jealous that my grandmother stayed with them in the United States. Their other brother had a mental breakdown after the interment camp, so they sent him back to Japan to seek help. The family had to disown him and the last they ever spoke to him; he was institutionalized in Japan. As for my grandmother, they had renamed her and the family to fit in a bit better with the community. My grandmother was originally named Kyoko, but they felt it wasn’t “American enough,” so her father gave her a choice to change her name to Dorothy or Rose. Her original last name was Sato, but her family had changed their last name to Dozen (pronounced Doe-Zen). She did not want to be known as “Dozen, Rose,” which is how she came to choose the name Dorothy. My grandmother got a job at first working as a house cleaner and later got a license in cosmetology. My grandfather had worked as a landscaper for almost his entire life. He even helped to create the Japanese garden in San Mateo central park.

I also want to speak a bit about my parents as well. My mother grew up in Kaneohe, Hawaii and went to Kamehameha school. She moved to California in 1981 with no job set up and no place to live. She fortunately found a job at Sumitoma back in 1981 then moved to the city of Berkley, where she worked at the port of Oakland at the Oakland airport. She went to Hayward State (now known as CSU East Bay) but never finished a degree. She met my father in 1983 at the Oakland airport working for FedEx. They met in 1983 and got married in 1985. My father worked at FedEx for 38 years as a courier before retiring.

Author’s Reflection: While my family had come to Hawaii and the United States in hopes to find a better life, this was not completely smooth sailing. I am truly grateful for this chance to learn more about my family history. There were hiccups along the way. My family may not have gotten the business opportunities that they were looking for but glad to find out more about this history. I also got the chance to learn the truth that not all aspects of my family history were great, there are other facets that I can take pride in. I feel a deeper connection to my family roots knowing who my family is and where I came from.

The interview with Phyllis Yoshimoto and the subsequent narrative were done by Lani Yoshimoto, a college student in the Bay Area.