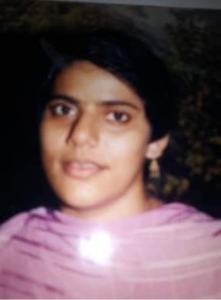 My name is Shaima Bibi and I was born on September 20, 1966 in Suva, Fiji Islands. The most memorable thing about my birth as I was told by my mother was that I was born at home with the help of the local midwife named Kanjie Nani.

I migrated to America in 1989 after I married your dad at the age of 21. Once we were married, I immediately became pregnant and your father was already in America by the time I gave birth. It took us 7 months to finally be reunited after obtaining my visa. Your dad would meet your eldest sister when she was already 7 months old. We were picked up at the San Francisco International airport and drove home to East Palo Alto. 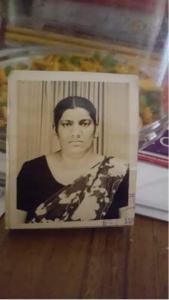 A tragedy did occur just one week before I came to America. My mother had a horrific accident where she slipped and fell whilst doing laundry. She hit her head on the cement so hard that she bled to death. My mom just became a grandmother and she was the happiest to see me so happy. I was so heartbroken to have lost her so suddenly.

I have a total of 6 siblings which include three brothers and three sisters. I am the third eldest and I have such fond memories of all of my siblings. As of now, two of my brothers have passed away, my youngest sister still lives in Fiji, and I have a brother and sister whom live in Australia. The distance was always hard but we knew that we all would have to go far away from one another someday. We were all we had and we loved one another deeply just as much as we used to fight on a daily basis.

All I can remember is that we always got everything we ever asked for as kids. My father was a foreman for construction and he help make the Sheraton Hotel in Nadi, Fiji. He had a well-paying job and was able to provide all of our basic necessities. Our childhood was so enjoyable and I feel rather lucky to have had experienced it. In those days there were no internet and television, and when televisions came out they were too expensive to purchase. We played with our tricycle, played basketball, soccer, hopscotch and a game called Tin Paani. Tin Paani is played by stacking cans and hitting them over with a ball. The motive of the game is to restack the cans as fast as you can before getting hit with the ball. There was no such thing as boredom and we were very active as kids. If we weren’t walking to and from school, we would help in tending to the farm. My main chore coming home from school was to cut down grass to tiny little pieces and feed them to the calves. We would cut firewood, feed the chickens, and milk the cows. My favorite activity would be to join my grandparents when they would go shopping for fruits and vegetables. One particular day on the way back home from shopping we had a flat tire. My grandfather could drive but he only had one leg so it was hard for him to do other tasks. I told my grandfather not to worry and I changed the tire all by myself. I was all but maybe 10 years old. One of my favorite things to do with my grandmother was to go crabbing and catch prawns under the bridge next to our farm. During school holidays us siblings were sent our aunts house in Navua to help plant rice in their rice fields. We would also grate coconuts to make oil. It definitely was a whole family effort.

There was nothing like a Christmas Day traditional Lovo while growing up. The smell of fresh lovo in the morning was something very special to wake up to. During those times, the whole village would prepare a large feast. Lovo is a traditional Fijian way of cooking different dishes underground. You make a large pit, start a fire, and leave large rocks on the bottom to contain the heat. Once dishes were marinated, they were left upon the hot coals and covered with the remaining dirt. Last, we would cover the pit with large banana leaves to seal in everything. There was always a hustle and bustle about Christmas morning and our parents made it special for us. Our Mom was able to have gifts ready for us and we would sometimes receive baby dolls and pots and pans to play with.

During Ramadan my sister and I used to watch our aunts make sweets for the big festival of Eid. We weren’t allowed to always help out with the process but we would watch closely. Then, my sister and I used to sneak in all the ingredients and a kerosene stove into a room and hide and make sweets for ourselves. We would mix all of the ingredients to make Lakdi Methai which are “sweet sticks”. We would make a dough, cut the shapes out, and fry them until they are golden brown. Then, we would make a syrup to coat the sweet sticks with. This is the type of activities that we would keep busy with as children.

I remember being so scared when I saw how many roads and freeways there were. Fiji only has 2 main roads that go around the whole island so to see so many for the first time was shocking for me. I thought that every taxi car was a police car and everything was so new to me. I was newly married and had a little 7 month old daughter to share all of this with. In comparison to Fiji, everything looked so big and clean in America. There were multiple places to do your shopping and I couldn’t believe that there was so much to do in California. Communication was also different in America because there was a time difference now if I wanted to talk to my family back home. We were accustomed in sending letters or recorded audio tapes in the past. Now, I could place a call by purchasing a calling card and talk to my relatives back home.

Oh my goodness, my first job in America was such a long time ago. There used to be a paint shop in Redwood City a long time ago, and I had a part time job there as a merchandiser. From there, your dad was interested in learning how to make pizza so I got a job at Round Table Pizza. I had various jobs since then and have worked in a grocery store and then with Unisil. Unisil was a mechanical manufacturing company and I would help assemble parts there. Times were hard and in between my pregnancies I had stopped working. Your father had a work injury which led him to change careers as well. Since then, I opened up my own business and would sell blankets and curtains at wholesale prices. I tried having my own spices brand and would items such as turmeric, masala, and whole spices as well. I used to be involved in the local Polynesian community and would sell trays of food after their church services. One thing I learned while navigating through life in America, was that there was always a means of income if you just put your mind to it. I did begin to take computer classes at one point but I could never finish or pursue education because our lives were so busy raising five children.

Becoming a mother to my five children has to be my biggest achievement. Experiencing motherhood as the happiest moments of my life. Watching each of you grow and taking care of you all was my purpose and I enjoyed every bit of it.

Yes, I miss my life back home dearly. If I had the chance to live there again, I would. I understand now, the sacrifices that my elders used to make for us. I understand now the meaning behind everything they ever taught us. I grew up with my parents, aunts and uncles, and grandparents, and I looked up to all of them. Which is why, every chance I got to visit back home I would take so many gifts. I would take evergreen Bollywood movies, candy, and clothes or shoes for my family.

Yes, I would do it all over again. I would however like to change certain things that have caused me a lot of pain. Although my childhood was great, we were always taught to never speak up. We were held back a lot during certain times, and I think that followed me into my adulthood. Once I was married I experienced a lot of tragedies and for that I am full of regret. I wasn’t able to keep my marriage together and therefore my children suffered.

Reflection:  I get really emotional thinking about my mother’s story because she lived such a youthful and innocent life in comparison to her life in America. Life in Fiji was fruitful to say the least and I couldn’t help but get a sense of sweetness listening to her story.

I can now see how the lives of my ancestors have impacted me today. It was a story that took place more than 30 years ago and it has shaped me into the person that I am today. The trajectory of the lives of my ancestors and myself aren’t that different. I am also on a journey to find myself and my place here on earth. Now, not only for myself, but for my children as well.

This interview was conducted by Shaima’s daughter, Zariya Hakik, a student at Foothill College in Los Altos Hills, California.