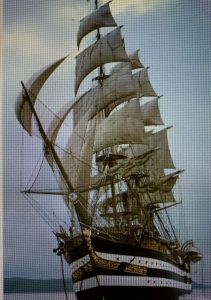 The following  was written by Rebekah Jackson after interviewing her friend Denny Lawhern about his own investigation into his family history.  It focuses on Denny’s 8th Great Grandfather, (1607 – 1692), Thomas Doggett who came to the colonies in 1637.

Thomas Doggett was born in Wendover, Buckinghamshire England July 4th 1607.  In May 1637 at age 30, Thomas Doggett sailed aboard the ship the “Mary Anne” with William Goose as Master. Thomas came as an indentured servant to Thomas Oliver, a Calinder (English title), age 36, of Norwich.

The Mary Anne sailed out of the little Village of Norwich on the East coast of England On May 1635 arriving in Boston, Massachusetts, June 20, 1637.
Thomas settled in the American Colonies in the area of Concord with the Thomas Oliver family.  Thomas Doggett serviced off his indentured obligations for Thomas Oliver for about a year.

Thomas Doggett continued to live in the Concord, MA area and met his first wife there. They had one child, John Doggett, born 1642 in Concord. However, tragically Thomas’s first wife died in childbirth.

In 1653 Thomas Doggett at age 45, and with four young children, would move to Marshfield, Ma. There he would meet the widow Joan Chillingsworth (maiden name Hampton) and her two children and they were married May 1 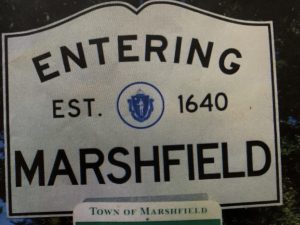 7 1654. They would have four children together: Rebecca, Jemima, Patience and Martha, bringing the total to ten children between the two of them.

Thomas Doggett would purchase a 120- acre farm in 1659 in Marshfield to help support the big family. He was a master craftsman of all trades and could build or fix anything. Thomas was also very active in the little village of Marshfield serving as the town Constable, Surveyor, Selectman, Grand juryman, Coroners Jury and Tax collector.

-Thomas and Joan had a good 30 years farming and raising their families together. Joan passed away on Sept 4th, 1684 in Marshfield Ma at the age of 68. Thomas Doggett would live to the age of 85, passing away in Marshfield, Ma. They are both buried in the Winslow Cemetery, in Marshfield, MA. 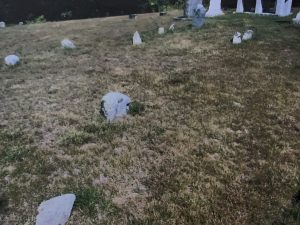 When Thomas Doggett immigrated to the colonies over 400 years ago he probably could never have imagined that his “family” tree would grow to over 15,000 relatives today.

My friend, Denny began researching his family tree over ten years ago and discovered Thomas Doggett and his journey to the British Colonies- being the earliest relative he found to be an immigrant to what would become the USA. Denny utilized Ancestry.com and through submitting a DNA sample would learn of a multitude of relatives- many of whom he would interview for the creation of his family tree. He also located several documents pertaining to his relative Thomas Doggett and visited the town of Marshfield, MA in 2017 to research his relative.

Denny remarked that through his research about his relative, Thomas Doggett, that “(He) never met the gentleman, but (he) ‘talked’ to him through all of the documentation.” Denny says he “…can visualize him.”

Denny learned that in Thomas’s day it was common for a widower to marry a widow- a young woman’s family might not find a widower, especially with children, a suitable match for their young daughter. It was typical to blend the families of widower and widow with the widower “adopting” the children of the widow and continuing to care for them as family even if their mother passed away.

Thomas’s Indenturor, Calinder Thomas Oliver was married twice and lost both wives to charges of “witchery” in Massachusetts. They were shockingly both burned at the stake.

Denny also located Thomas’s actual Will- the distribution of his worldly goods that included land, animals, furniture, clothing, items made of pewter, brass and iron, farming items and books. 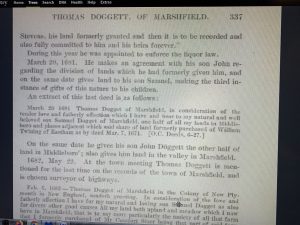 Of note is that Thomas’s third wife, Joan Chillingsworth’s first husband and his father were co-founders of the town of Marshfield, MA along with a few other families. In Thomas’s day there were about 50 families in the area, and it is not far from Plymouth, MA where the pilgrims landed.

Thomas’s grave at the Winslow Cemetery is marked by a large boulder- Denny has a photo. The burial grounds have several boulders, approximately 20-30. Of note is that Daniel Webster, of Webster’s Dictionary fame, is buried in the same cemetery.

Denny visited the town of Marshfield in 2017 and viewed documents pertaining to Thomas Doggett at the Town Center- the documents are housed in a vault. He has copies of several documents and includes here a drawing of the ship the “Mary Anne” that brought Thomas to the colonies, his Will and the present-day Marshfield, MA town sign.

Denny feels that his strong drive for volunteerism and community service, as well as his love and passion for craftsmen work, has been passed down from his 17th century relative Thomas Doggett- who was a farmer, a family man and wore many hats in service to his community.

What changed for me was realizing that every person’s journey as an immigrant is both unique to that person and yet similar to others taking the same leap at the same time in history. Their reasons could be opportunity, escape, religious, political, economic, safety, persecution, both legal and illegal rationales, etc., and these reasons don’t seem to change over history nor geography. I could see the inter-connectedness with the past and how globalization includes emigration/immigration both spatially and over time on our planet encompassing the present day and into the future. No matter how government and political entities might try, you can’t stop people moving from area to area, from region to region- it is a global force unto itself.

This interview and narrative were written by Rebekah Jackson, a student at Foothill College.