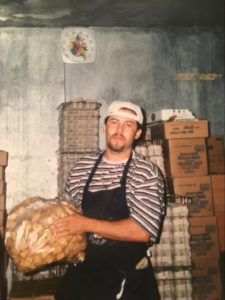 Here is a photo of my dad in his mid 20’s, working at The Marina Food.

My father has always been an active man, always eager to learn something new and prepared for whatever was to come. Rogelio Sotelo was born on July 27, 1973 in the town of Jamay, Jalisco, into a middle class family of five girls and four boys. As a young child, through elementary school, he would wake up every morning and the first thing he would do was milk and feed the cows, and go to school in the evenings. He was always eager to learn, received good grades, and would make his family proud in his academics. When he entered high school, he would go with his dad to work in the fields. On Saturdays and Sundays he sometimes worked as well so he could get the extra money to take a bus to La Barca where he attended school, and be able to buy himself food for the day. Being a high school student was somewhat stressful because working and being able to keep up with his work in school at the same time was a struggle. Especially as the oldest of all, he had more responsibility and duties. After high school, he went to college in the city of Ocotlan and later realized college was not really for him. He decided to leave México when he was 19 years old because he wanted to make a better living for himself and earn enough money to buy his dream truck, a Chevrolet Cheyenne. His brother-in-law and two friends had came to México and made his decision that he would leave with them to the United States and pay what’s called “the Coyote” at the border to allow him to pass. It was a hard experience, crossing the border, because he never knew what it was like and almost risked his life. Crossing the border, he automatically loved the environment, the beautiful skies, trees, the weather and knew right away he did not want to be anywhere else but California.

Life in America was somewhat tough when he arrived because he knew he had to start working right away to be able to live in the state of California and send money back to his parents and siblings he cared so much about. Everything looked completely different to him, since México back then was somewhat dry. He lived with his sister Alicia in a trailer in Sacramento, and found a job at a winery alongside his sister, where he was paid the minimum wage of $4.25 an hour. Communicating was not an issue for my father because everyone he knew was close by, and cousins lived around the block. While working, he met many people and made friends quickly. He knew working at the winery 2 or 3 times a week would not be enough to make a living, so he would get a ride from one of his friends all the way to Cupertino at The Marina stacking merchandise while getting paid the same amount. He realized he liked it better in the Bay because of the many people he had met and got very close to, so he decided he would move in with his friends in an apartment close to where he worked. He worked there for almost 8 years and finally earned $10.50 an hour. He came to live in East Palo Alto in an apartment with his cousin, and did not expect to meet the love of his life, my mom.  He met her in 1995, one year later, they decided to move in together into another apartment, and my brother was born in 1997. Still working at The Marina, getting paid the bare minimum, he was able to satisfy their needs and live a happy life. When he married my mom around 2001 she was able to give him papers to become a U.S. resident and apply for union construction. I was born in April of 2002, and when I was two years old, my father got into a motorcycle accident and did not work for eight years. This was a life changing experience because he knew he was letting his family down by not being able to support us four. During those eight years, he would do all house duties and take care of me while my mom would work overtime at Ikea.

My dad is currently still working in construction and supporting his family here in America and back in México as well. Because of his accident, sometimes he does not have the ability to work as hard as he wants to since his knee constantly bothers him. He likes what he does because of the many friends he has, but at the same time he wishes he could do a little more. He somewhat has gained the ability to learn English and tries to speak it here and there, but definitely needs a lot of practice in understanding it as well. He is currently working and hoping to become a U.S. citizen and continue supporting his family in any way he possibly can.

The story of Rogelio Sotelo was written and recorded by his daughter, Izabella.