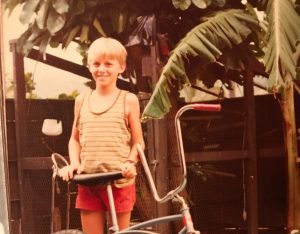 My dad in his backyard in Kailua

“It was like a Hawaii vacation that you would dream of, coming from terrible weather. But it was not a vacation. We were staying.”

Growing up in the late 1960s in Edmonton, Alberta, Jay Patrick Kelly Furlong spent winters building campfires, playing ice hockey, riding snowmobiles and shooting cans with rifles in the woods. “We saw extended family much more because we could drive to Calgary which was two hours away, or on other longer vacations we could drive to Saskatchewan.” Jay said. He grew up in a busy household with four brothers and one sister, being the fourth child himself. “My dad had a new business he had just started – his second Shell gas station. And we had just finished building our family’s dream home,” Jay said.

In the late 1960s, the original “Hawaii 5-0” came on television. “I can remember being in the family room in Canada in the middle of the winter, so it’s all snowy out, and then you see this tropical island on your TV… It looked magical, at least to me as a little kid, and I think to my mom too,” he said. Jay’s mother, Violet, born in Insinger, Saskatchewan in 1924, had always been infatuated with America, and she wanted to be there. With that as an undercurrent, she convinced Jay’s father Michael to go visit Hawaii with the idea that the family would move to Hawaii for one school year, about nine months. Jay’s parents visited Oahu and picked the town of Kailua. 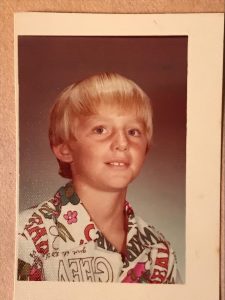 Nine-year-old Jay and his family flew from Edmonton to Vancouver, and from Vancouver they flew into Hawaii’s capital of Honolulu. His most prominent memory during his travel to America was excitement. “I was nine years old so the family was everything. Our family was going on the huge adventure and I didn’t think twice about leaving where we were – from our friends or school,” Jay said. Though, at the time, travelers were allowed six months of vacation without needing proper documentation in the destination country, “I don’t know exactly what my dad told them. I remember some back-and-forth being very clear and being told what to say or what not to say because we weren’t supposed to be crossing the border,” he said. Though Jay and his siblings couldn’t wait to arrive in their new home, “I feared getting caught all the time, all of the time. I’m sure my parents did as well. Your story wasn’t accurate, and it wasn’t truthful, and if you got caught it wasn’t good. I hated crossing the border,” Jay said.

Upon arriving in Kailua, Jay and his family stayed in a hotel for their first week, finding a house shortly after. Jay, as well with his brother Roger, got a job within a month of moving to Kailua as a paper delivery boy. He had his own designated paper route for three years and has been working ever since. The immediately noticeable difference between life in Edmonton and life in Kailua for him was the amount of time spent outdoors. Jay and his siblings spent their days biking around the island, boogie boarding, hiking and on the beach. “We had a screened-in lanai instead of a basement in the frozen tundras. It was a very different lifestyle,” Jay said. His parents had no jobs lined up due to the fact that they were only planning on coming for one school year; Jay’s father still had his gas stations in Edmonton and planned to fly back and forth weekly to run them. His mother Violet, “fell in love with the place and she soon knew she wasn’t going to leave,” he said. Jay, on the other hand, found it very easy academically, however not so easy socially. Though there were lot of other Caucasians, Jay and his siblings were in the minority compared to the local Pacific Islanders. He and his siblings faced heavy racism, and lots of bullying and other violence. This influenced his desires later on to go back to the mainland for college. As the clock ticked closer to the end of the school year, the family soon realized that they weren’t going to leave. “Different things happened in that first year, but the history is we just never ended up leaving until I moved to California to go to college.”

Jay graduated from Kailua High School in 1980, and attended Stanford University that fall, bringing him to the Bay Area for good. “I just knew, more from having heard my mom say it, that she was ecstatic [when I got into Stanford]. She got the envelope in the mail when I was at school. Back then, a little envelope? Bad news. A packet? Good news. So that’s how it came and they all knew before she gave it to me. My dad too was very, very happy,” he said. Jay graduated from Stanford with a Bachelor of Science in Mechanical Engineering and Product Design in Spring of 1985, and started his own paint contracting company, Stanford Painting, in the following few years, which he has now owned for 30 years.

Jay met his wife Laura Anne Lombardi, a San Francisco native, in 1993 and they married in the Spring of 1995. He was then able to receive his US citizenship. They went on to have a daughter named Casey Anne Michelle Furlong in September 1995, a daughter named Allie Ashley Eugenia Furlong in May 1997, and a third daughter named Jaime Leilani Brooke Furlong, in November 2000. Moving forward, Jay hopes to bring joy to people through his cooking, as well as see his three daughters succeed in whatever we choose to do.

Since Jay left his extended family and roots in Canada, he felt like he lost, “all of the aunts, uncles, the Ukrainian culture,” he said. “They’re much more into the culture, the dancing, the clothes, the church, the Ukrainian food. So I think that part of our heritage was lost.” On the other hand, “our family, my siblings and [my mom] especially, got closer together because we went to a place where we didn’t know anyone else,” Jay said. As well as family closeness, Jay gained huge diversity. At the time, Edmonton and the surrounding area had very little diversity, and Oahu was, and still is, a place of vast racial and cultural diversity. Jay and his family contributed to this diversity as well, bringing many traditional Ukrainian recipes. Though life in Kailua wasn’t always easy, and he felt a loss of relationship with his extended family, Jay looks back fondly at his many years spent living in Hawaii. Through any relocation or change, connections with family can often be lost, but familial and cultural traditions are something that can always be brought along, no matter where the destination.

The interview and story of Jay Furlong was done by his daughter, Jaime Furlong.