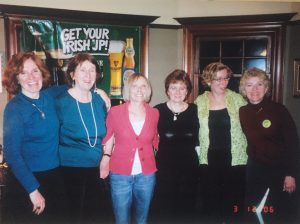 My grandmother, Peggy Woodworth (the granddaughter of James Larkin, second from left), and two of her sisters, Jane and Eileen (third and second from right, respectively), and some friends pose for a picture at the 2006 St. Patrick’s Day Party.

Filling the air of the living room with the unique smell of tobacco, James Larkin smokes his pipe as he reads the newspaper. His son-in-law, James Connors, asks him, “Want a whiskey Pops?” to which James Larkin nods in the affirmative. Wafting in from the kitchen is the smell of raisin bread, freshly baked by his daughter. This is 1940s Pittsburgh, Pennsylvania, and Larkin lives with his adult daughter and her family, in the working-class borough of McKees Rocks. His daughter had contracted scarlet fever as a girl, and, as a result of prolonged absence from school, never learned how to read.  While he was a man of few words, James Larkin always managed to read the newspaper for this daughter in his soft Irish accent, a remnant of his somewhat obscured past.

These are the memories my grandmother, Peggy Woodworth, has of her grandfather. On October 3, 1936, my grandmother was born, the third of six children, to James Connors, and Marie Larkin Connors who was the American-born daughter of James Larkin. I sit with my 82-year-old grandmother on her front porch in Palo Alto, California, as she recounts what she knows about James Larkin. She can hardly remember a single conversation with him, only visits to her aunt’s house where James lived after his wife had passed away. Adding to this is the fact that he never talked about his time in his native Ireland.

What we do know is James Larkin came to the United States in the 1880s or 1890s, maybe by himself, maybe traveling with a brother. His family, who helped to take care of a wealthy family’s estate, was plagued by poverty, and this led young James to run to America for better opportunities. His boat landed in Ellis Island in New York, where he made his way to Pittsburgh. He then settled with an Irish woman he met in America, Margaret Pratt, and fathered eight children. James Larkin hailed from County Meath, outside of Dublin, the capital of Ireland. County Meath is known for the town of Kells, where the Abbey of Kells is located. The Abbey of Kells gave name to the Book of Kells, which was housed there for many years. The Book of Kells is an ornately decorated Gospel Book dating from about 800 AD and is widely considered to be one of Ireland’s national treasures as well as a masterpiece of Western calligraphy. Additionally, County Meath contains a Gaeltacht, or an area designated as primarily Irish-speaking, one of the few Gaeltachts outside of Ireland’s West Coast. However, it is unclear if James Larkin spoke Irish; my grandmother had only heard him speak English. Sadly the Ireland James knew was a country under the oppressive control of the British Empire, which had done everything in its power to squash the Irish language.

In America, James, who given his poor background was uneducated, took a job with a railroad company. He and his family settled in the borough of McKees Rocks, in Pittsburgh. Their neighbors must have worked in similar jobs; McKees Rocks was famous historically for its manufacturing, steel, iron, and railroad industries. This would be logical, given the borough’s placement on the Ohio River. It was in this environment that my great-grandmother Marie Larkin Connors spent her youth. Despite her conditions of being from a poor immigrant family, Marie was very successful in school, becoming the valedictorian of her graduating class, and was known for being a math whiz. Sadly, this great potential went mostly unused with Marie never attending college, as part of the result of a society that heavily discriminated against women, and the lack of financial means. She retained her ambition though, perhaps from her immigrant father, and at first refused to marry my great-grandfather, James Connors, because she didn’t want to quit her job (woman in that era were expected to give up their careers and become housewives). She finally said yes to him when the Great Depression hit. James Connors was a 3rd generation Irish-American, and perhaps due to his family’s more established American presence came from a college-educated family, in a higher social class. Together they moved to a new neighborhood in Pittsburgh, Bellevue, to raise my grandmother and her five siblings.

When I ask my grandmother what influence James Larkin had on her, she says his influence was primarily the desire not to end up in the same conditions as him. McKees Rocks, where James Larkin lived, had always seemed bleak and depressing to my grandmother. She had seen first hand what a lack of economic opportunities could do, both to her mother’s family and the other residents of McKees Rock and was determined not to suffer from the same obstacles. My grandmother succeeded in this goal, attending college and becoming a teacher, eventually settling in the Bay Area.

As for James Larkin’s family back in Ireland, James Larkin seemed to try to erase them out of his life. He never wrote letters back home, or traveled back to Ireland in the time my grandmother knew him. He never discussed his life back in Ireland, or his experience immigrating either. There is not an obvious answer to why. My grandmother and her family speculated that perhaps James did not know how to write, but this would be unlikely given that fact he knew how to read, always reading the newspaper to his daughter. Furthermore, even if he did not know how to write, he could have made an effort to communicate. My grandmother also believes that he felt Ireland “was awful” and did not wish to think about it now that he had a new life in the United States. My grandmother’s family was not in contact with their Irish kin until some years later when my grandmother’s aunt managed to track the family down, eventually establishing a correspondence. The Irish side of the family was apparently very happy to hear from their American cousins after so many years. In 1994, my mother and grandmother traveled to Ireland, and made a trip to County Meath to meet some of the remaining relatives of James, the cousins of my grandmother. In a picture I have seen of the trip, two smiling elderly people with some missing teeth, the relatives of James, are dressed in the drab clothing of a farmer, and stand in front of their tiny cottage, surrounded by the greenery Ireland is famous for. To this day, a cousin in Ireland named Brandon still sends my grandmother a Christmas card. She tells me she always makes sure to write him an email back.

Even though James Larkin lived way before my time, I still feel a connection to my great-great-grandfather, through my grandmother Peggy. My grandmother has always lived two blocks away from me, and since I was a baby I’ve spent countless hours at my grandparents, be it Sunday dinners, pool parties with my cousins, or sleepovers when my parents were away. Spending all this time with my grandmother, who is very proud of her Irish heritage, has certainly made its mark on me. For most of my childhood, my grandparents hosted a big St. Patrick’s Day party, epitomized by singing Irish songs like Danny Boy and Molly Malone around the piano at the end of the night. Besides just being a bunch of fun, this tradition helped to start my identity as an Irish-American. I can still remember my cousins and I on those nights thinking that since we were a quarter Irish if that meant just one leg was Irish. As I reflect on these parties, I wonder what it would have been like if James Larkin was there as we sang “Cockles and mussels, alive, alive, oh!” if he would have joined in or sit quietly back smoking his pipe.

The story of James Larkin was written and recorded by his great-great-grandson, Leo.