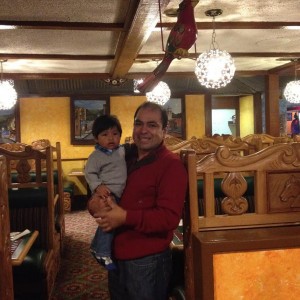 My name is Jorge Rey (name changed to preserve anonymity). I am patient. I am outgoing. I am humble. I am one of a kind. I happily live in Hayward CA with my wife, two sons, daughter-in-law and my one year old nephew who I adore so much.

I was born in 1974 in Guatemala. I  lived with my grandparents and started working when I was 7 years old in agriculture with my grandfather who was a farmer. I went to school in the mornings and in the afternoons I would go work. I was a good student in school. I was a boy who valued school and would do anything to stay in school but I only got to eighth grade because we couldn’t afford a higher education. We lived in a small house and we barely had enough money for food and necessities. That is why my grandfather didn’t pay me in money but with food and shelter.

The reason why I lived with my grandparents and not with my mother and father was because at the age of 4, my mother and father divorced. Soon after that my mom remarried another man and wanted to move to America and I didn’t want to go with them over there so my grandfather told me to stay with them.

When I was living with them people from the Guatemalan military would take kids younger then me with them to train them and soon join them in wars. I remember hearing about one of my friends who died fighting in the war. At the age of 14 I moved out of my grandparents house because I wanted to make my own money so I could buy the things I wanted. I had shoes but they had holes in them and were very dirty. I wanted new shoes but my grandparents couldn’t afford them. So I moved to the town most closest and a little bit more wealthier than the one I lived in to find a job. I finally  found a job at a bike store where I didn’t get paid much. At 17 years old I fell in love with my wife. At this time soldiers were taking any man they could get to go with them. I remember one of them catching me one time but I hit him and bit him until he finally let me go.

Since then I knew I had to leave to America. I left my one-year-old daughter and my wife pregnant. It wasn’t my choice to leave but not having enough money and being forced by the soldiers into the military forced me to.

In 1993 it was very hard to come to the United States and for Guatemalans like me passing through Mexico was what made it so hard. The only place I really knew was Guatemala so Mexico, even though it was so close to me, was very unknown to me. Me and four other people were on a journey to reach the United States. We didn’t make a plan or anything. We would hide from Mexican Immigration. Once we got caught  and they took the little money we had. Having no money forced us to stay in Mexico for eight days. People that felt sorry for us gave us money and we also called our families in the United States to send us money so we could continue our journey.

In June of 1993 we arrived to San Diego, California. My mom picked me up and brought me to her apartment  in Redwood City, CA.  I felt happy because I had arrived to my destination but at the same time I felt sad to be away from my wife and kids. My first job was as a gardener. I would earn 40 dollars each day and I only worked 2 or 3 days a week. Then I got a job as a roofer but there were some days that rained and for those days I didn’t have a job. In 1997 I got a job as a painter, I would get paid 6 dollars per hour. That was not bad at this time but that wasn’t enough for much of the things I had to pay for. At this time I had my wife and kids with me. Now I lived more happily with my family.

Before coming here and experiencing life from a whole different perspective, I had dreams. Dreams like to get an education and a high paying job but most of them didn’t come true. My kids are all grown up now. I am proud of my  daughter who graduated from college and is now married with one child in Mexico. Also my son is married with one child. All I am planning to do from now on is to support my youngest son who is 16 years old in all he needs and save up money so soon me and my wife can retire.

Daniel was interviewed by his granddaughter, a 9th grader at Everest Public High School in Redwood City.