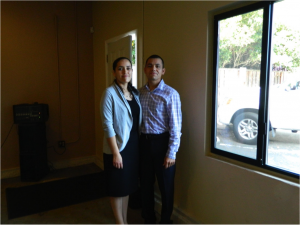 Maria and Juan are really hard working people (names were changed for this article). Maria was born and raised in Michoacan, Mexico and Juan was born in Arteaga, Michoacan but raised in Michoacan, Mexico. Both are always willing to do anything for their family. They are kind, loving and they would never give up on their dreams, just like they never gave up on coming to America to have a better life for their family.

It was a hot summer day in Michoacan, Mexico when my husband told me that he was deciding on moving to America. Life in Mexico was very hard. We all had to work to be able to have a good life. In order to live a good life my husband had to find like about 3 jobs, but we never had enough money to buy our own house, so my daughter and I lived in my mom’s house, while my husband lived in his mom’s house.

“Maria we really need to move to America! So that we could have a better life!” He said. I agreed with him. Our daughter was only one year old. Moving would be very dangerous and could also costs lots and lots of money!

So I told him, “Okay we’ll move, but we won’t move until D. is three years old. We will work very hard to get enough money so we could all have a better life.” I said. Juan and I were so thankful because now we might have more opportunities.

“We finally have enough money!” I said, but Juan didn’t look so happy. “What’s wrong.”

“I only have enough money for one person. I’m really sorry I worked really hard!” He said.

“No it’s fine. You go then, you will find a job and then we will move. Don’t worry you can do this. I will start working and then we will have enough money for both D. and I.” I was really happy that my husband would get to move, but I was also really scared because what if something happens and he is not safe. But I know that he will be fine because God will be with him throughout the whole thing.

“Okay mi amor te amo mucho!! No te preocupes yo voy a trabajar muy duro para poder traerlas a mi lado otra vez.” He grabs D. and I and he gives us both a big long hug. “Las amo mucho!”

“Are you ready to leave?” I ask, giving him his luggage.

“Yes, please take care of my mom. I Love her. And please be careful. I Love you.” As soon as he was about to leave, D. came and gave her dad a big kiss. D. knew that her dad was leaving, but she didn’t know that it was going to be for so long.

“Yo te quiero tambien mi niña!” Juan gave us one last hug and he left. In his luggage he only took two nights change of clothes and a photo of D. and I.

As soon as I left the house I went straight to meet with the person that was helping us pass the border. Including me there were 6 other men trying to pass to America. They had all left their family as well so they could have a better life in America. I tried not to talk to the men because I didn’t want to cause any problems. But they told us that we were going to be walking a lot, so they told us that if our luggage was too heavy that we should probably leave it, but I didn’t.

We have been walking for three days. I asked for water, but no one had any. We are all really hungry and tired, but we had to continue walking so that we could pass the border fast.  We are all really tired so we stopped to rest for a while. It was already 8:30 at night, so I decided to just lay down to rest my legs a little bit. I was starting to get a little bit sleepy when someone called me,

“Hey, come on we have to keep walking.” So I stood up and continued walking. We walked from morning through night, but this night was different. It started to rain so we finally got to get some sleep. Everyone tried to find some food so that they could sleep with a full stomach, but they didn’t succeed.

“Okay everyone huddle up before you go take some rest I just wanted to tell you that we are almost there just a few more miles. We will probably get to the border by tomorrow!” everyone started cheering quietly, but I gave thanks to God because he gave me the ability to make it for almost 5 days out here. Finally being able to sleep is amazing. When I woke up everyone was cleaning up and getting ready to keep walking.

We kept walking and a few miles ahead I see a bunch of cars passing. But I see one car that is hiding. That must be the car that is here to take us to America. When the person driving the car got out he looked at all of us and told us where to go. I was told to go to the back of the trunk with other people. I couldn’t see anything, but I could hear conversations and footsteps. Then all of a sudden I feel the car moving. I just think to myself we actually crossed the border! While I was thinking, the car suddenly stopped I hear footsteps again and I hear someone trying to open the trunk, but it’s just the guy helping us get to America.

“Well you did it! You crossed the border!!” I was so happy because now that meant that I could get a job and I could bring my family here. When I got out of the trunk the two men brought us in the car until we got to this place called San Diego. We stayed their for a while then we moved to Los Angeles. While we were there I called my wife.

“Guess what? I found my sister, A., and she and her husband are willing to let me stay at their house till I find a place to stay.” I said giving her the good news.

After that we all started to pack up because we were going to Redwood City! Once I got to Redwood city I was just expecting to find a job, but once I got here I was faced with lots of obstacles. For example the language, I didn’t know anybody except for my sister, I would always be missing my family, and not understanding the conversations people were trying to have with me. It made me want to learn. So I tried learning, but I still needed more practice so I kept asking the friends that I had that spoke English to teach me. Another obstacle that I faced was looking for a job, but my wife’s cousin helped me get a job at a dry cleaners. It wasn’t my favorite job, but I had to keep it so that I could bring my wife and daughter to America.

“Honey!! Guess what?” I called my wife excitedly.

“What? What are you so excited about!!?” she asked.

“I got enough money for you and D. to come to America!” I replied.

“In two weeks!! Get ready and start packing okay!! I love you!”

I can’t believe that we are finally going to be as a family again! I’m really happy!!

“We are going to America to see dad!” I replied.

“Really? I can’t wait!” she said and I couldn’t wait either.

“When are we leaving?” she asked.

“We are leaving in two weeks!”

“Are grandma and grandpa coming?” she asked.

“No honey only you and I, but don’t worry they will be alright. Come on let’s go tell them the good news.”

Knowing that I will have to leave my brothers, my sisters, and most importantly my parents is really hard because it felt like I wasn’t going to see them again. But I knew that I was going to America so that my daughter could have a better future.

It was time to start heading to the airport so everyone drove with me and D. so that we could say our goodbyes together. When we got to the airport everyone was very quiet. D. was the first person to break the silence.

“Don’t worry you will always have us in your hearts!” that made everyone feel much better.

“Be very careful.” my mom said.

“We will. We love you and please take lots of care for each other.” I said. When the airplane arrived we all said our goodbyes, but we were all happy because the feeling that we weren’t going to see each other changed. As we got on the airplane everyone was treating us nicely. When the airplane arrived at Mexicali, D. and I, had to walk to  Calexico, but through the desert. When we both arrived to Calexico we were picked up by the person that was going to help us arrive to San Diego. But before we had to stay down low, so we stayed in a house full of men for two days. My daughter and I were the only girls, but everyone was very nice and respectful. After two days we were told that we were finally going to be able to see my husband. So that D. didn’t worry we stopped by McDonald’s so that she could get distracted by the food. Then two hours later we finally arrived to San Diego where we both met my husband, my husband’s sister, and her husband.

My first reaction in America was happiness because I got to see my family together again!! I was also really happy because now my daughter and I were safe and we were never separated. When I got here I was scared because I felt like I wouldn’t be able to speak the language or people would laugh at my language, but people were very nice and no one laughed at me. After the week that I got here I found my very first job at a nursing home. It wasn’t the most exciting job, but I had to keep working so that we could continue paying the money for D. and I being here.

Today, both my husband and I have our own cleaning company. We do not regret at all being able to come to America because we can see with our own eyes that America does have lots of opportunities. And we as a family are very grateful for those opportunities.

The interviews were conducted and the story was written up by Maria and Juan’s daughter, a 9th grader in Redwood City, CA.