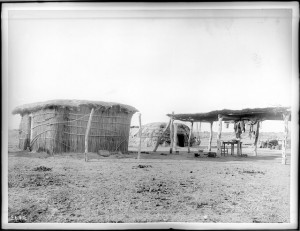 In Hidalgo Mexico my house was made of sticks and the roof was made of grass. For me and my family it is a beautiful place to live in even though we were poor. Where I lived with my five big sisters and me – the little brother and two nieces and a nephew. I worked in the crops to get money beginning when I was young – in the morning before going to school and after school. I’d get home really late at night.

In 1997 I decided to come to America to get money to give to my family. If I wanted to come to the United states of America I had to cross the border so I decided I had to if it meant get money for my family to survive. I crossed but got caught by immigration along the way five times – and had to go back to Hidalgo. When I decided I wanted to try again I said my final goodbyes to my family and friends and gave thanks to God I made it out safe and sound. I couldn’t bring anything with me only the clothes and shoes I had on the day I left Hidalgo because that is the only thing I could carry on my own.

When I got to San Jose my cousin let me live in his house for as long as I wanted. In the third day I was there he told me he found me a job in construction. When I started working there I would go every morning to buy breakfast which was really hard for me because I didn’t know any English. I couldn’t communicate with the waiter because he didn’t know Spanish. I had to use hand gestures every time I needed to communicate with someone who didn’t know Spanish. The only thing I knew how to pronounce in English was to order coffee and donuts. I felt discriminated just for being Mexican and sad because I left my family and friends.

Three years later in 2000 I went to school every weeknight after work to learn English. That is where I met a girl that is now my wife. We decided to get married in 2001 and we had our first daughter and lived for a while in a house shared with two other families. After the wedding we decided we wanted to live by ourselves and have our own stuff without needing to share with other families. We moved to another city where we had other two children and I found a job in construction and got money to send for family in Mexico. I am working to get money for a bright future for my children too.

This interview of her father, was conducted by Luna, a 9th grader in Redwood City.