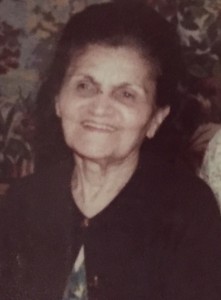 The Armenian genocide began in 1915, when Mannig Keshkekian was five years old. The Ottoman Turks cast her family out into the desert. They hung all the scholars and priests in Mannig’s community because they did not want the local people to have any education. Mannig’s mother had died in childbirth, and her father had left for Egypt before the genocide had started – to search for a better life for his family. She was taken in by her aunt, but her uncle viewed her as a burden. However, Mannig’s aunt was adamant that Mannig stay with them, and so Mannig had a home. In order to maintain their Christian heritage and education, the children read Bible stories and practiced writing the alphabet in the sand. Mannig’s aunt made Mannig repeat her father’s name, and her own name daily so that she would have at least some chance of being reunited with her father.

During the genocide, girls were raped, kidnapped and sold as slaves on the market. Of the Turkish soldiers, Mannig said, “Even though I was only five years old at that time, I will never forget what the soldiers did. They took unborn babies from their mothers’ [wombs], tossed them in the air, and impaled them with spears as a sign of Turkish bravery. Many women took their children and ran and threw themselves off the cliff to avoid meeting such a brutal fate.”

After Mannig’s aunt died, her children and Mannig went to an American orphanage in Aleppo, Syria. By some miracle, her father was able to find her in that orphanage and bring her back to Egypt. There, she attended a school run by Armenian Catholic nuns. Mannig met her husband in Egypt, and in 1926, they married in Sudan, which was colonized by the British at that time. Many displaced Armenians ultimately found themselves in Sudan. Here, Mannig raised her two daughters. Her husband opened a women’s clothing boutique. They were able to send their daughter, Shake, to London where she attended college in Library Studies. Their daughter Susan worked at the boutique.

In 1955, Mannig’s husband died of a massive stroke. In 1956, tensions rose in the newly independent Sudan and a 17-year civil war broke out. In 1966 Shake, one of Mannig’s daughters, was able to immigrate to the US and got a job as a research librarian at the Stanford University Library. She lived in a small cottage near the university. In 1967 Shake was able to bring her mother, and her sister to the US. Mannig was 58. Susan found work at Saks in the Stanford Shopping Center.

Mannig said that the American people were very friendly and helpful, and because of this, they were able to heal from “the emotional scars of the pain we had endured throughout our lives.”

Many Armenians today believe it is their duty to pass on their stories of the genocide so the horrific events will not be forgotten. On this topic, Mannig said, “All Armenians, to this day, passed on their prejudice to their children on purpose, but there is a lot of loyalty still to the Sudanese; they welcomed the Armenians into their country and were good to us.” The Turkish government still has not acknowledged the Armenian genocide, and to many Armenians, this is a grave insult to the extreme suffering of their mothers, fathers, aunts, uncles, and their culture itself.

Mannig Keshkekian passed away in 2011.
This interview was originally conducted for a school report by Strat Goumas, Ms. Keshkekian’s neighbor. The interview was recently written as a story for Made Into America by our volunteer, Sana Khader, a high school student from Mountain View, CA.