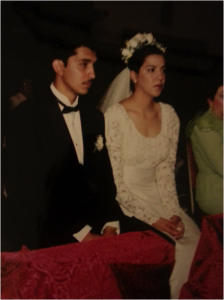 Mexico is the country where I grew up and became the man I am today. Mexico was like any country, beautiful, full of life, and full of memories. There was just one problem when I was growing up, the economy was bad.

I grew up in a poor house that had paint chipping from the walls and with a single mother and to top it all off – with 7 siblings. It was a constant struggle just to get something in not only my stomach but my siblings stomachs as well. The years went by and I still had to work, go to school, and help my mom so that we could be able to feed ourselves.

I later married F.  and had our first child.  After we had our child, that’s when I really started to think if moving to the U.S would be good for our family. Since everything was expensive and I didn’t want my kids to grow up like how I did; in a very poor house with little to eat and no opportunities for a better future.

In order for me, my wife, and child to move to the U.S, F. and J. had to come to the U.S a safer way than I did so that I didn’t have to worry about losing them. I knew from the beginning that the trip was going to be very expensive and very difficult so I worked very hard each day for about a year and I also borrowed money from other people so I could go to the U.S.

After I had everything set, my wife left first so she could get to Los Angeles since her sister was living there and so that we could have a place to stay once we arrived in the U.S. I had to take care of my son J. in the meantime since my wife F. had already left to the U.S. After she made it to the U.S, we had someone we could trust take J. to America and I had to stay behind to do the most difficult thing that changed my life forever:  cross the border by walking through the desert with nothing.

Once I was ready to start my long journey, I knew that I was going to leave everything: my family, my friends, and my life that I lived in Mexico. While crossing, I couldn’t take anything, but only my memories of Mexico and my determination to make it to America so I could see my wife and my son and so we could start an amazing life with opportunities.  I spent three days walking through the blazing hot sun while crossing the desert. I didn’t eat anything while coming to America since the heat made me want to throw up anything I tried to eat.

When night fell in the desert, it became very cold and I would barely sleep because I was in constant fear that a snake or a coyote would kill me when I would try to get some rest. On day three that’s when I started to see the city of Los Angeles and I just remember being so happy that I has able to make it to America safe so I could be with my wife and son.

When I reached the place my wife was staying at, after she opened the door, I just remember giving her the biggest hug. My wife couldn’t even recognize me since my skin got darker and I had a lot of blisters. Weeks went by and my blister finally healed and I was able to finally go to school to start learning English. After I knew enough English, we moved to San Mateo County and I got my first job at a body shop. I worked at the body shop for fourteen years.

Now, my kids are all doing very good in school and they are always trying their best to make sure they get to where they want in life. Also, I live in a nice home with an amazing family and I have a job that pays enough so that my kids are able to get what they need. Even though I am not able to see my family and friends that are in Mexico, I do not regret moving here to America.

This interview was conducted and written up by J. – the son in this story.  He’s a 9th grader in Redwood City.