An Immigrant Story-Leaving the Fields in Mexico 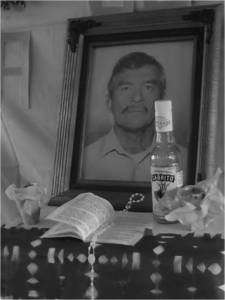 I was born in 1977 in Pozo De Ibarra, Mexico. I grew up  not having many toys to play with but that did not mean that I didn’t have an amazing childhood. As I grew up, I remember how all of my brothers and sisters always told me that even if they had lots of siblings they still waited very excitedly for the new baby to arrive. I grew up with 5 brothers and 8 sisters.  I have always been a funny and humorous person.

When me and my brothers would see that  it was starting to rain we would be so excited to wake up the next day and swim in water dams that would fill up. I also would love to play soccer with my friends. But It was not all fun and games. I had to go to school. I went to Ramon Lopez Velarde. Sadly I only went to school till I was in 7th grade because me and my brothers had to work at a young age to help my parents. Also I would see my sisters help my mom with the food and cleaning the house.

Around the age of 13, I decided that I wanted to move to the U.S. I wanted to have a better economic life and help my parents in the future.  I first left to Tijuana, Mexico where it was a more of a big city and live with one of my older sisters. In those few months that I stayed in her home I decided to work in the supermarket. I  worked 8 hours everyday.

I only stayed in Tijuana until I was 16 and then I went back to the really hot Pozo de Ibarra for a few months. I then worked in tobacco fields picking  up the tobacco leaves and putting them in  packages. I worked 12 hours everyday from Monday through Saturday in the hot sun.I would have to wear a sombrero so that the sun will not burn my face. I had to wake up at 6am  when it was still very dark and ride my bike all sleepy to the fields and start working right away. I would usually go to work  with my friends and brothers.  Meanwhile my sisters would run a store that my family had  and others would clean the house. When I got home from work I would usually eat bean tacos and chicken.

I just stayed in Pozo de Ibarra for 3 months. In the year 1993 when I was still 16  I told my mom and my dad that I wanted to go to the U.S.  They told me to not to go because crossing the border was too dangerous,but I still left right away. I first went to Tijuana with my sister on a bus. I remember promising myself I  would save money and would give some to my parents. We stayed with another sister, Tencha,  for a few days. The days seemed pretty normal to me. Even though I still was not able to believe that I would be in the U.S in a matter of days.

I had to be prepared for a long and cold walk so I got all my things ready. I packed little food like cans and dry food ,two gallons of water a jacket, and one extra pair of clothes. I woke up that dark and cloudy morning ready to be picked up by los coyotes the people that helped me cross the border picked me up and they took me to the border. I walked with them part of a night that seemed like I was walking thousands of miles.

I remember there being over 20 other people that were also crossing the border with me that day. They were all a mix of men, children and women. The path was  filled with many dangerous animals.

We first arrived in the old rusty house that belonged to the  coyotes. I felt mixed emotions and thoughts . I felt  relieved that I did not get caught, happy I was in the U.S, but also scared because I did not know what to expect next. They took me and other people to where our destinations were. They took me to Los Angeles. When I arrived to L.A I stayed with my brother Santos . I remember feeling happy that I got to see my brother again. When I saw all the well made roads I was amazed it was all so clean. It was such a big city. I stayed  with him for a few days and then he took me to a bus  that would take me to Redwood City. He also gave me some money to eat for that day and to buy my ticket.

My other brother Ernesto was already waiting for me to arrive in the morning in San Jose. I stayed with him and his wife. While I was with him I worked as a gardener with his friends. I didn’t work for long because I had to go back to Mexico because my father had passed away and I wanted to go see my family that I hadn’t been in contact with for a long time. I did. 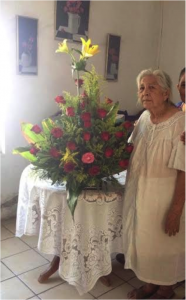 I am in the US now living – not a fancy and rich life – but I am economically stable. I am now working a stable job at a good company and raising my three daughters and a son with my wonderful wife.

This story was written by the son, Kexia, a 9th grader in Redwood City, CA.