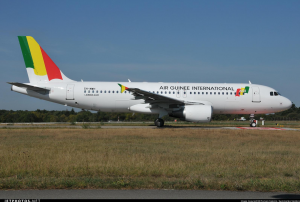 This is what the plane that I took look like.

Every time I went outside at night, I was scared to be chased by the police.

In my home country of Guinea, the weather is sometimes hot and cold. I went to a private school where I had to pay, and my classes had more than thirty people. Also, dirt is found almost everywhere in the city. There were no concrete roads. I remember one day, my sister was eating food outside and talking on the phone when a child came into the yard and ate all of her food. My sister realized the child was hungry, so she got some more food for him.

Life is difficult in my country. There is no security to keep people safe. Also, it is hard to find a job. People are living in poverty. It is scary to go out and do things with my friends. Every time I went outside at night, I was scared to be chased by the police. They do not like when people are outside in the middle of the night, so if they catch you, you will get beat up. One night, one of my neighbors was riding a motorcycle when two guys killed him and stole the motorcycle.

Before I left, I bought some clothes, shoes, and a suitcase. I rode in a car and went to visit my grandpa’s house to say goodbye to him and his family. Then I got back into the car, and we drove to the airport. When I got to the airport, the person I was traveling with was waiting for me in the waiting room. We stayed there in the waiting room for a while until the plane was ready. First I landed in Senegal, then I went to Belgium early the next morning, where we stayed for two hours. After that, I continued traveling until I arrived in Seattle, Washington.

When I arrived in America, one of the problems I faced was in the kitchen. I took the teapot, I put some cold water in, and I turned the oven on. When I put the teapot on the stove to heat the water, I put it on the wrong spot. I didn’t even notice, because I didn’t know how a stove works. I thought you just have to put it wherever you want on the oven and turn it on. I went to watch a movie while I waited. Then when I went to see if the water was ready, I noticed it was on the wrong spot so it was not hot. I was happy because I realized that life was completely different. It’s much colder, and it even snows sometimes. American culture was new to me; even the grocery stores are different. When you want to buy something at the store in my country, like rice for example, the customer cannot get it. Only the workers can. In the United States, it’s different. You can pick whatever you want and go pay for it.

The benefits I experience after coming to America is feeling safer, having better opportunities, and getting a free education. You start a career by earning a degree and then starting a business. One of the hardest things about being in the U.S. is being confused by the language. I couldn’t speak English, so everything was hard for me to understand. Another example is the rules of the road. They are much different in the U.S. than in my home country. In Guinea, when you want to turn left or right, you have to stay in your lane; whereas in the U.S., you can stay in the middle and use the turning lane to wait until other cars pass.

My hopes are first to finish high school and get my diploma. Then I want to go to school to become a pilot. I also hope to start a business later on. Then I can buy a big house and live together with all of my family to satisfy them. Overall, I want the Earth to be at peace and all people to unite. I want children like me to work hard, get a good education, and pursue their dreams.

This story was written by Ibrahima Diallo, a student near Seattle.