How My Father Made It Into America (India) 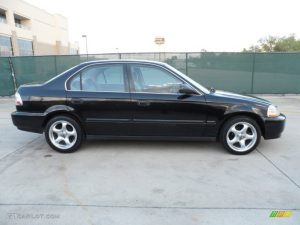 The car my father bought.

My father’s father was middle class and from a small village in India. His parents died in a fatal accident, and he was brought up as an only child by relatives. Through hard work and labor, he managed to find a wife and support his only child, my father. The drive and work ethic of my grandfather was passed down to my father. This was made evident at school, where my father was always very engaged in learning math and wanted to be a physicist.

He managed to get into college and get a physics degree, but something else at the time greatly interested him; he found a passion in programming computers, which were scarce at the time and place he was at. He still managed to learn his craft, and got a job at a company to program computers. At this time, he met my mother and soon married her. Soon after, his company wanted him to go to L.A. to do some work in America and he readily accepted. He traveled alone and left my mother in India. He was supposed to be in America for about a year, and lived in an a fairly spacious apartment with another man working at the same company.

My father did a fantastic job in L.A. and was soon noticed by Microsoft and offered a job. This job was his absolute dream job. He described it as “working for the company that makes the product you use to work for another company.” Basically, it was of utmost importance he got that job. By this time, my father had already gotten the paperwork he needed to stay in America for an extended period of time, so he had bought a Honda Civic. My father was so nervous for the interview that he crashed his new Honda Civic on the way to the interview. He called Microsoft and pleaded that they let him take the interview a different day because of what had occurred, and thankfully the interviewers were willing to reschedule.

All went well after and my father got the job, flew my mother out to America, and moved to Washington, where Microsoft’s headquarters were. My father was extremely satisfied at his new job, so much so that he took a loan to buy a nice house in the suburbs to start a family. Coincidentally, the day I was delivered was the same day that my parents closed the house and finally owned it.

Since then it’s been nothing but a smooth ride. My grandfather, the same one from that small village in India, has started living with us, and my father is still working at Microsoft, a job he continues to enjoy to this day.

The story of Sandeep Parab was written by his son, Aditya Parab.