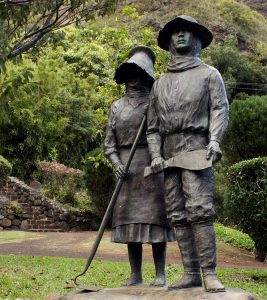 Being an American doesn’t mean you’re a citizen, it’s a feeling. It’s faith, believing in your country, supporting it through good and bad, and paying your duty. When you have that, nobody can touch you. I interviewed my mother in order to learn about my grandfather, Hideo Tomoyasu, and his immigration to Hawaii.

My grandfather was born in 1920 and for most of his childhood, Japan was in a very bad economic state. Banks were failing, the government was spending money irresponsibly, and as a result many Japanese citizens were affected by these choices. The lifestyle was very strict, centered around family and honor. Additionally, there were rising feelings of Nationalism and Imperialism in Japan, which led to a very aggressive stance in Southeast Asia.

Ultimately, it was the attitude of the Japanese government that drove Hideo’s parents to move them to the US. They completely disagreed with the way the Japanese were expanding their empire, and felt that the US was a much better fit. As a result, they decided to move to Hawaii in 1940. My grandfather, his three older brothers, and his parents all immigrated to Hawaii sometime in early 1940, leaving almost everything behind. He and his family took a boat, spending about a week at sea. The travel to Honolulu was seamless, and they soon docked at Honolulu Harbor. 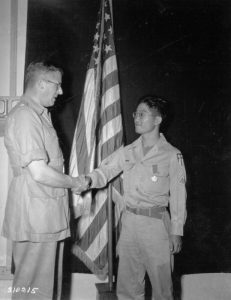 After living in an apartment with his family for about a year, he was introduced to my grandmother, Kimiye. While I do not know the details of their meeting, they soon fell in love and were married. Not long after that, they purchased an apartment of their own. However, shortly after purchasing this apartment, Pearl Harbor was attacked by the Japanese. My grandfather was determined to prove his loyalty to the United States, and he along with his three brothers rushed to sign up for the military. He watched as all three of his brothers walked in, signed their papers, and walked out with a look of accomplishment.

He walked up, gave his papers to the enlistment officer. The response he got was, “You definitely cannot join the army.” “Why?” My grandfather asks. “Well, because you’re a Jap.” This would be the first of many times he faced discrimination for his Japanese citizenship. His brothers were accepted, and all three fought in the 442nd infantry until the surrender of Germany.

He and my grandmother did all they could from home, however, with my grandmother becoming a nurse in order to treat soldiers returning from the Pacific. My grandfather got a job with a contracting company, and built many civilian houses along with military infrastructure. Because he lived on the island of Hawaii, he was not placed in an internment camp as the government deemed it a waste of time due to its proximity to Japan. However, many Hawaiians did not trust the Japanese living in Hawaii, especially my grandfather. He had moved to Hawaii not even two years before the bombing, and was still a Japanese citizen. He had been called a spy countless times, had been refused service due to his race, and even lost his job because of allegations. However, he was still determined to see the good side of America, and chose to live a normal life in spite of all the hate.

After being fired from his company, he decided to start his own contracting company, where he built many houses on the island including the four houses he and all his kids lived in (3 of his 4 kids remained in Hawaii, while my mother moved to Los Angeles to pursue a nursing career). He loved it, and worked until he retired in 1994.

While my grandfather has sadly passed away, he achieved his simple dream of having a job he enjoyed and having a large and loving family. He lived a quiet life, and I think that was his ultimate goal since the day he immigrated to America. To the day he died, one of his biggest regrets was that he could not fight alongside his brothers. He loved the idea of living the life you wish to live, and I like to think that he got what he wanted out of this country. While my grandfather was an official Japanese citizen until 1945, he never really connected with his past and his previous country. He was much better attuned to the ideologies of America, and while I cannot personally ask him anymore, I think it was one of the best decisions he has ever made.

This story was written by Hideo’s grandson, James Glassford, a student at Palo Alto High School, in Palo Alto, CA.