Halfway Around the World (India) 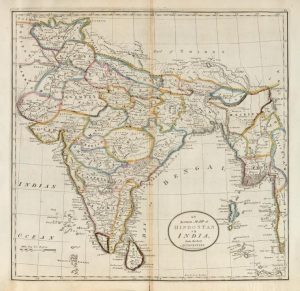 This map depicts India, the country from which Shreya immigrated in the early 1990s.

At the young age of 23, Shreya Acharya moved 7672 miles across the world from New Delhi, India to Stanford, California. Her soon-to-be fiancé, Vishal Acharya, was a graduate student at Stanford University at the time. While she had to leave her entire family behind in India, immigrating gave her the opportunity to start another one in the States.

As her father was a senior official in the Indian government, Shreya’s family lived in the government district of the capital city, New Delhi. They lived in a large, British-era bungalow with 10 maids’ quarters, security detail, and a chauffeur to drive their car–all the frills of a good life. They were also surrounded by like-minded individuals: diplomats, civil servants, members of parliament, and ministers in the federal government (known as secretaries in the United States government). Since her parents valued being together, her two married brothers and their families, as well as Shreya and her twin, all lived together and celebrated Hindu festivals such as Diwali (festival of lights) and Rakhi (symbolizes brother and sister bond) as one–the house was constantly full of life.

In 1990, Shreya met her future husband, Vishal Acharya, at the age of 22 (in India, marriage is considered at a relatively young age). While their meeting was arranged through a mutual friend, they soon decided to get married. Since Vishal was a PhD student at Stanford University at the time, the marriage required Shreya to move across the world to an unknown place with unknown customs despite being in her early twenties. Shreya vividly remembers the 26 hour plane trip to America in 1991. She was seated next to an elderly Caucasian gentlemen who asked about her background and goals for the future, and wished her all the best. She also remembers the unpalatable Indian food served on the flight–Rajma, a dish focused around kidney beans that, when prepared correctly, can be quite flavorful.

Adjusting to life in America initially proved to be challenging for Shreya. She often received strange looks from others, typically blue-collar Caucasians, because of the color of her skin, fellow students struggled to properly pronounce her name, and vegetarian options were very limited, if not nonexistent. Shreya recalls a particularly early experience of America in Brooklyn, New York, hearing gunshots at night from her room. Growing up extremely sheltered, it was a scary encounter like none other. Shreya also missed her family tremendously–flights to India were expensive and often infeasible, and calls were rather pricey for young graduate students. However, America did provide access to a more well-rounded and well organized education system. Shreya attended the University of Michigan in Ann Arbor to earn her PhD as Vishal worked toward his MBA, also at Michigan, while working at General Motors. She still credits this achievement as one of her biggest and proudest milestones after having moved to America.

After many relocations within the United States and even abroad, Vishal and Shreya finally settled in Palo Alto in 2005. They started a small family, which included their caring 6 year old son and talkative 3 year old daughter, and were successful in their respective careers. To this day, the family happily resides in Palo Alto, their son in college and daughter in high school.

This story was written and recorded by a student in Palo Alto. Names were changed for anonymity.