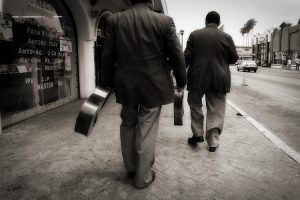 Guillermo Ortiz (name changed), is 45 years old and was born and raised in Nueva Italia Michoacan. He immigrated from Tijuana, Mexico to San Fernando, California in the span of three days. He is currently a mechanic in gardening equipment and he likes to watch soccer and play his guitar as well as sing to pass time. I chose this person because I realized that I didn’t have a connection as strong with my dad than with my mom and also I had previously known that he had immigrated to the US but he went back twice and I wanted to know why.

Born and raised in the city of Nueva Italia Michoacan, in a family of 13 brothers and sisters, Guillermo was somewhere along the middle. His parents owned a big piece of territory in which they had a big house established. Life wasn’t always so easy when you had thirteen mouths to feed, bodies to put clothes on and cover up in the night. Despite these hardships that most families experience, he was happy. He didn’t have luxuries or anything of the sort, but he never complained. At a young age he started to work and sing with his brothers in a Mexican band that would be known as Los Jaguares de Michoacan. When these kids grew up, they built their houses around the house of their parents in the land that they now shared.

Guillermo worked for a while in Mexico until he was 35 years old, when he decided that he would come to the United States to look for job opportunities. By now, he had a wife and a son of two years of age. The journey was planned for 1 or 2 weeks and then it was time to say goodbye to his wife and son that stayed behind. He migrated for approximately two hours from Nueva Italia to Morelia in Michoacan. From Morelia, he took a bus, alone, until he got to Tijuana. In Tijuana, he had to spend one night in a cheap hotel for about 300 pesos where the rooms were ugly and unclean. During this time, the thoughts of his family back home tormented his mind, and the questions ran a mile a minute in his head. The what ifs were the worst ones. What if he never saw them again? What if he couldn’t bring them to the United States? That morning he boarded a plane by himself, where he came to the United States and people were waiting for him. The trip took three days overall. Newly arrived in the United States, resided in his sister’s home, the first thing he did was shower, eat, and sleep. Then he began to search for a job

His first friend was named Alfredo and he was the one who helped him get a job because he was the brother of the manager of the place. He worked in a vallarta, in other words a food market type of thing like FoodsCo. He was in charge of putting all the vegetables and fruits out on the stands during the night. From 9pm to 6 in the morning. After about 8 months of working there, he quit to finally bring his wife and his 3 year old child from Mexico. His wife and child had to separate in order to go across the border. They both arrived at his sister’s house where they lived for about a year and a half. They had to pay rent for their stay: $400 plus electricity and water. They traveled to Redwood City because his wife had family there that promised them a place to rent and jobs. They had a hard time adapting to the environment, they had no friends and hardly knew english so life was tough. Always searching for work, Guillermo pushed forward and his wife helped by taking care of her child: enrolling him in school and waiting for him despite her busy schedule. They had cold nights but they managed to survive.

‘Til this day, Guillermo is living in Redwood City and although the economy has made the situation harder, he still continues to be that hard working man from all those years back that strives to push forward. Although he has partially adapted to Redwood City, California, he still misses his home and his family like most immigrants in America. The culture here is so different than what he was used to but for his children’s future, he is willing to make that sacrifice.

This story was written by Guillermo’s daughter.