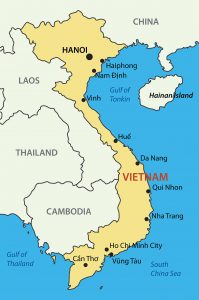 On November 1, 1955 the Vietnam War began, the North Vietnamese against the South Vietnamese. It was hard for the people and for the government. Tons of people had to leave. People couldn’t live under these conditions. The north came over to the south and robbed the south. Kim’s family (name changed) left when she was eighteen years old to escape from the North Vietnamese government that took over the south. Each person had to pay 18 gold pieces for their freedom so they could leave their country. 12 pieces of gold for each child.  There were 25 members of her family that left the South which included her grandparents, parents, uncles, aunts, cousins and 11 siblings. Kim’s parents were fourth generation. Her father, a dentist who was very wise, educated her. While Amy was growing old she went to a private school.

Before Amy came to America she heard these stories about naked people walking around on streets. She had family staying in Europe who saw people walking on the nude beaches and so the story was passed around and was changed that so people thought that nude people just walked the streets normally. She knew the culture and the government were going to be different. She said “I was eighteen years old and didn’t know where the heck I was going”. She said you had to “go with the flow”. They had to find a way to leave Vietnam, Luckily, they found a fisherman who was taking refugees to Malaysia.

They left Vietnam by a fisherman’s boat that was 17 feet wide and 21 feet long. The boat had three layers. The top sat the captain who drove the boat, the second floor was the deck where the adults were placed, and the third floor which was the lowest, was for the children because it was safer and had better conditions. Amy said that the fisherman went by the sun and only by the sun. She said it took her 4 days when the fisherman said it would only take two days to get from Vietnam to Malaysia. When they passed a big boat they would take off their white or red tops and waved to the passing people. They had no food and only got a spoon full of water. There were about 321 people on the fisherman’s boat. They had to cross legs so they could create more space. During her travels the boat was stopped by pirates that asked for 15 pieces of gold for each person. She knew that was going to be hard with the size of her family, but remembered that her family had enough. On the last day to Malaysia there was a big storm with unyielding waves that would soak the deck of the boat. Beneath them the sea was rising as high as mountains. She didn’t think she was going to make it. But she prayed and they survived and that’s when she became a true buddhist after a miracle that her ship survived.

Amy said after coming to the island in Malaysia that she knew they were back at square one and that they had to pay the money they got from the UN to fly to America.  Her family had to live on the Island for 8 months and waited for their names to be called so they could come to America. They had to dig wells to get water, Vietnam let them wear two tops and two bottoms only, but she said that her family wore three layers. They used clothing as a water filter so they could get clean water. They had to build a shed made of coconut leaves. She says that sometimes they had to say “Coconut drop down BOOM” and it would fall on their head and sometimes a person would die. The UN would interview people on the Island and they would take your name back to the UN and they would decide where the person should go.  Amy said that sometimes it took a while and some took a short time for them to call a person’s name. After they were selected by churches who sponsored they would fly them to America. UN helped the refugees and they would pay for the airfare but once they got to America they had to pay it off. She had to have an interview with an Australian man. The man asked her “How old are you”, which she didn’t know much English at the time so she replied with “eighteen”. Amy said that her sister knew more english because her father saw her as a people person so he let her learn english. Amy expected more questions so she said “eighteen O’clock” thinking that she was saying years old. Amy’s sister later told her that it was “years old” not “O’clock”. She said people who said Australia is better than U.S. are “ignorant people they don’t know better”.  After her family was called and being sponsored by a church she came to the US by plane with her family.

Once Amy arrived in the U.S. she said that she was very grateful that the people from the church who took them in were very nice and helped them to learn how to do new things. She said that getting a job and speaking the language was the tough part of the transition. The Vietnamese didn’t let them bring a lot of money, so Amy and her parents had to get jobs right away. She learned a little bit of english when she was younger.  She said it was easier for her younger siblings to learn and that the elderly would hide in the back because they didn’t know english. Amy said people would make her lose courage and they would look at her, and think that she is a refugee and she would bring them down. As Amy was growing up she always wanted to go to medical school. She knew she had to help her parents, so she gave up her dream of going to medical school. She didn’t believe she’d ever become a hairdresser but she is happy she did. Her church godmother saw her cut hair for 5 boys and 5 girls at the church, so they told her she should go to beauty school. They donated money so she could go to school and she tried extremely hard because of the people who believed in her. She learned a lot from the older generation of the 80’s on how to act and it shaped her into the person she is now. There were some nice Chinese kids who translated for them, they would help her and her siblings.

She was never poor back in Vietnam and she told me  “when you are poor and they hurt you that makes you strong”. She knows that sometimes you have to endure hardships to grow. She thinks the culture changed her very well. And because of the old fashion they raised her well by a family named the Barkers.  They taught her to be honest and kind. She learned that when someone does something nice for you, you should give back to somebody. “When you try hard what you want you make it” “they give lots of opportunities”.

This story was written by Isaiah Schoenberger, a friend of Amy Le and student at Palo Alto High School.