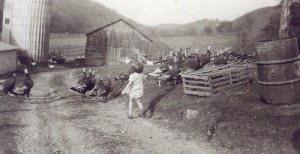 The land was covered in green grassy hills, big farms, and livestock that would be perched on the hills, where the grass was more luscious and bountiful —
It was fall of 1852 in Bubenheim, Johann and his three brothers worked the farm. For 31 years Johann was born and raised in their family farm in Germany. Johann Georg was a farmer who was gruffy and small, his hands full of blisters from the axe he used. He loved to be a farmer, if he wasn’t plowing the crops he was milking their cow.

Sadly it was their time to leave. It was late in the year and the oldest of the four boys had gained rights to the farm after the death of their dad forcing Johann and his two younger brothers to find a new home. Unexpectedly, it forced the brothers to ask the question: where they would go? America wasn’t the first place they thought of. There was Canada, and they also thought about South America at one point.

Johann and his brothers decided that the best choice was to do what their cousin did just a few years ago and do manual labor in France until they got enough money to take a boat to the east coast of America. They needed land or they would be stuck floating around France and Germany.

On the way to France, Johann found himself a wife and got married, then continued to move to France. Once there he and his brothers did hard labor and made money so that all four of them could book passage on a boat to America. After three years of labor all four of them were ready to begin the long trip to America.

In 1855 they landed on the coast of New York City and gathered together. They had little money but just enough. Soon after they landed and got together, Johann, his brothers and his wife went to Wisconsin and with the money they had they bought a farm with a broken fence. They tried to make look like their old farm in Bubenheim. The thing that no one ever did was fix the fence. Johann was a good farmer and was making good profit, he also had three kids with his wife. Although things seemed to be going well and life for Johann was looking up, the Civil War was still in the midst.

It was 1865 and Johann was now forty-one. Even with his age he still volunteered to fight for the North’s fiftieth regiment of the Wisconsin army. Johann ended up being a private and staying a private throughout the rest of his time in the war.

No more than six months later in the war Johann became sick with malaria after a battle with the south. The fight was a dirty one in some swampland of the south. He ended up having to go back to his farm in Auburn, Wisconsin.

When Johann reached the farm almost nothing had changed the crops were still growing and the animals were still healthy, and still no one bothered to fix the broken fence. He was able to make it home but the day after he reached home and reunite with his family he died of malaria, leaving his wife with three kids to take care of. Johann died when he was forty one years old.

His wife ended up moving out of Wisconsin but she never remarried. She was beautiful and still young, but it’s still unknown why she didn’t remarry, it leaves you to wonder if Johann was the only person she ever need to love or was her days of dating and loving over?
Johann’s life ended at the same place his new life began but his memory lives on though our stories. Johann came into America a farmer and left as a farmer, just the way he wanted to.

This story was researched and written by Nathan Erbes, a 9th grade student in Redwood City, CA.