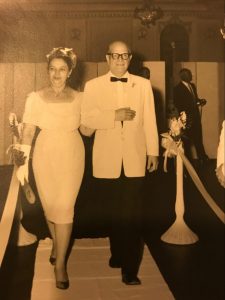 David Milliken and his wife Sarah walk down the aisle at their son’s wedding.

Lubelska to Trakt Lubelski to Słoneczna to Zdrojowa. Every day; Lubelska to Trakt Lubelski to Słoneczna to Zdrojowa. This was the path my great-grandfather took to the local grocery market in Wola Ducka, from his house. Clouds of dirt rose behind him as he cycled into town to get food for dinner. Three miles there, three miles back, every day he would bike. The grocery store had all of the best foods; Babka and Pączki were his favorites. Everyday he would reach out for them, wanting to put them in his basket so he could go home and devour them, only to remember his mission; he was to get dinner and only dinner, no dessert or special foods allowed.

A small brown crowded house outside of Warsaw was what he came home too. Walking into the front door he would see his five sisters all clustered around one bed in a dimly lit room. His six brothers were often running around the dining room table, made for eight but with fourteen seats pushed around it, chasing each other and screaming at the top of their lungs. His father sat in his chair at the table working while his step-mother hurried David into the house to get the dinner supplies so she could cook. The house quickly filled with the smell of dinner as everyone gathered around to help set up for Shabbat dinner.

David Milliken, my great-grandfather, had a very simple, yet exciting, migration to America. Living in Poland outside of Warsaw, David started his life with his two parents and five siblings in a small crowded house in Wola Ducka, Poland. Things got worse when his mother, only thirty-one years old, passed away when he was six. Two years later his father remarried. Over the next eight years, his father and step-mother had six more children. The house, now bustling with people, was getting too small. Needing to pay for David’s older brother’s and sister’s gymnasium tuition, the family could not afford to buy a bigger house. (In early 19th century Poland, education after high school, or what we call college, was referred to as “gymnasium”). The family also knew that they would soon have to send David to gymnasium as well. Two years later David went off to gymnasium in Warsaw, attending the University of Warsaw studying to be a doctor.

In early 1914, a senior in college, David came home for break. His father and step-mother, still busy with the seven kids that at home, became wary of the approaching war. They urged David to follow his brother and sister and leave Poland once he finished college. David thought over the proposal and decided to finish college and follow his older brother’s footsteps and move to America. Back at college, a special visitor came to campus: Albert Einstein. The German physicist heard of David’s plans to move to America and become a doctor. Dr. Einstein graciously wrote a letter of recommendation for David saying, “I think you’d be a fine doctor” and gave him a large pat on the back. David beamed with happiness as he went home exclaiming to his parents “I am going to America and Einstein approves.”

As David prepared to leave for America, he applied to New York University’s medical school hoping to become a doctor in United States. David’s application was declined for one reason: he was Jewish. David, still determined to become an American doctor, took his letter from Albert Einstein and applied to Tufts University’s medical school. David was accepted and he packed his bag and took the next ship out of Gdańsk to New York. David spent the next 36 days heaving over the rail due to the rolling waves rocking the boat up and down, and the strong smell of sea salt which he hated. He arrived in New York on July 27, 1914 and made his way up to Boston by train.

David spent the next four years in Boston at Tufts University studying to become a doctor. In 1918 he graduated and moved back to New York. In New York David started his own pediatric practice. He worked hard to build his business and while it stayed a small business, David was very successful in his practice. Along the way David met a man, Seth, who worked in real estate and they became very good friends. Seth encouraged David into buying real estate. Seth managed to get David to buy two apartment buildings which at the time were not very expensive. As the market grew, David bought and sold more real estate ending with two apartment buildings; one that he rented and one for him and his wife to live in. As David got older he sold one of the buildings at a huge profit to help pay for the families needs. David died at the age of 79 peacefully in his home. The ownership of his final apartment building passed to his wife, who lived there until her death in 2001. David lived a successful life, but lost a lot in his journey to America. David did not see any of his step-siblings or his parents again after he left Poland; yet he was proud of his immigration, his choice to immigrate to America and the success he had there. The last of David’s legacy is gone yet his memory lives on in his children, grandchildren and great-grandchildren.

The story of David Milliken was written by his great-grandson, Zachary Weitzman.