From Third to First (Colombia) 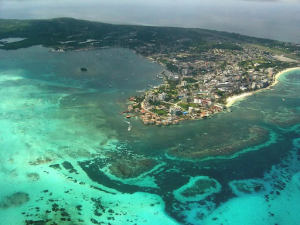 My name is Robert and I was just a teenager when I left. In my jean shorts, white tank top, and sandals I was young. 19 years old, alone, and full of dreams when I decided to come to the United States. I knew there was more opportunity for me here than the island in Colombia that I came from.

I was born on November 26, 1969 and grew up on San André Island in Colombia. We ran around the island in the hot sun with no shirt, we went down to the beach all day long to fish, swim, run, jump in bushes and look for mangos, sweet sugar cane, and all type of things.

When I lived in Colombia, it was hard to know what or when our next meal would be because the condition of the island was a third world country. The poverty was substantial because a regular job paid minimum wage of maybe $20 per month. The minimum wage I received from my job was one of the reasons why I felt that coming to the United States may be the best thing for my future.

Back home I had heard stories, seen tv shows, and researched about the United States before actually deciding to come here.  I had already known a lot about the Los Angeles Lakers, Boston Celtics, and New York Knicks because basketball was my favorite sport. When I told my brother that I was thinking of moving to the U.S., he told me about the Barco del amor, the love boat, which were the cruise ships that went on long trips.

When I left Colombia in 1988, I was 19 years old with no worries or fears about leaving. The decision to come here was made easier because I already had a brother in Miami who was willing to welcome me into the U.S. and set me up to get my new life started. I was surprisingly more excited to come here than I was nervous because I knew that I was getting the opportunities that Colombia couldn’t give to me.

“Estaba emocionado, pero una cosa que dejé atrás, desearía haber traído, era mi familia. Los estaba dejando para una vida mejor, pero fue difícil porque mi familia lo era todo para mí.” I was so excited but one thing that I left behind that I wish I could’ve brought was my family. I was leaving them for a better life but it was difficult because my family meant everything to me. That’s why I left, so that one day I could do enough to assure that I could go back whenever I want.

I flew on a plane 1,474 kilometers from home to Miami. My brother was at the airport to welcome me and I was so excited to see him. Once I landed and got my luggage, I waited and called my brother on a pay phone. I asked him, “Hermano estas casi aquí?” Brother are you almost here? He replied, “Mira a tu izquierda.” Look to your left. I remember giving him the biggest hug I’d ever given anyone.

On the car ride to my hotel all I could think about was the great opportunities I was about to receive and the beautiful beaches I’d get to relax on whenever the bright and shiny sun came out. That was until I got to immigration.

I was discriminated against for being from Colombia. “Toda la inmigración piensa que todos los Colombianos están introduciendo drogas de contrabando en los Estados Unidos, así que estuve 12 horas en la inmigración para que se aseguran de que yo, un hombre Colombiano que habla inglés roto en busca de una vida mejor, no fuera un narcotráfico.” All immigration thinks that everybody from Colombia is smuggling drugs into the United States so I was held at immigration for 12 hours for them to make sure that me, a Colombian man that speaks broken English, in search for a better life, wasn’t smuggling drugs.

That was the most racism I had faced upon my arrival into the United States. I was very upset because I sat in immigration customs for so long. They had to verify my employment, my visa, and my identity. They didn’t feed me, I just sat there. They assumed, “Oh he’s from Colombia. He MUST be tied to Pablo Escobar, let’s check him.” Pablo Escobar had been the drug lord of Colombia in the 1970’s. It took time for me to realize, I didn’t even bring a lot with me. I only bought 5 pairs of underwear and other items I needed because everything I need is here in America.

My first day I stayed in the Days Inn Hotel in Miami, Florida. That was where I stayed before I joined the S.S. Norid, the cruise ship that was my first job in the United States. I actually got the job because my brother in Miami was working as a travel agent and set up an interview for me.

Though I haven’t seen him in a while, my brother and I keep in contact with each other, but he still lives in Miami where he sells Almoi products trying to get rich. Despite enjoying the U.S.,  it was still really challenging for me to get over missing my family back home everyday. “Cuando hablé con ellos, siempre hablaban de todas las cosas que estaban haciendo y no podía estar allí.” When I talked to them they always talk about all the stuff they were doing and I couldn’t be there.

I will never forget all that my brother had done for me when I came here. He was the person I turned to for directions to places, jobs, even dating advice. Although he helped my adjustment in the country he wasn’t the one who had a hand in me coming to California. That was my wife Deloris who was my very first friend when I got here. I had actually met her on a 7 day singles cruise with her friends to Barcelona, Spain where her undeniable beauty had captured my attention along with her sweet voice. I was her waiter on the cruise and we exchanged numbers. I even remember saying to her, “You are absolutely gorgeous, I feel like I’m dreaming.” It was was one our funniest moments because I actually didn’t realize I said it out loud but she took the compliment and replies, “Thank you. You’re not too bad looking yourself,” which made me go crazy and from that moment, I knew she was the one.

Before coming here I thought my English was pretty good for someone from another country but it turns out that when I got here my broken English was not that easy to understand. I didn’t think it was that bad but my wife said that people had a hard time understanding so she was my interpreter and she knew exactly what to say.

To further my life here I enrolled in trade school in an adult education center. My experience in school was very good, I was very excited. At the time I had a lot of courage to become a nurse but then I chose nursing assistant as the easy way out. I found this the easy way out because I just wanted a job that would make me responsible but not that I’m fully responsible everyday. 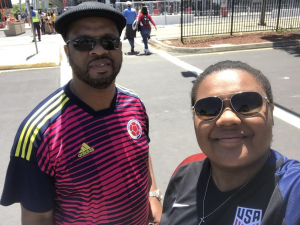 I am living my best life now, I am a Christian and believe in the sovereignty of God. I love my wife Deloris, my kids Merylin, Isaiah, and Maya, I love my son-in-law Patrick and especially the newest addition to our family, my grandson Lennox. I love my job that I have now, it’s not the same I start off with. I work two jobs now. I work as a trauma technician at the county hospital. I also have had the privilege to work as a a recovery technician at Kaiser Permanente for 17 years which has given me the pride of being able to buy a house for my family. I make enough money here, compared to when I had minimum wage back home.

Despite me loving where I am now, there are times that I’m sad because some days I wish I were home to enjoy some of the home lifestyle such as fishing, picking mangos, swimming, and hearing the Andean Condors chirp their songs all day long and into the night, but I am also glad that I came here. Now I can always afford to go back home whenever I want and I can afford to buy whatever I want.

My life now revolves around the words, “Venir a América es una oportunidad única en la vida para cualquiera que venga aquí y el cielo es el límite y usted puede ser quien quiera que sea.” Coming to America is a opportunity of a lifetime for anyone who comes here and the sky’s the limit and you can be whoever you want to be. When you migrate, and you pay taxes, follow the rules, and most importantly, follow your dreams and your heart, you’ll be fine.

This story is based on an interview by Maya Saams-Hoy, a student at Eastside College Prep.