From the Alps to Autonomous Systems (Switzerland) 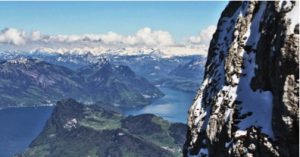 The Swiss Alps, an incredible sight to see. A place great for hiking in the summer and skiing in the winter. A place where you can get some breathtaking photos of snow-capped mountain tops or lush green valleys. A place in the country of Switzerland, and the birthplace of a man named Jannik Zgraggen.

Jannik is a Stanford student who is currently renting a room in my dad’s house, in America. They met through Craigslist, a website where people sell used things for low prices. Jannik reached out to my dad on Craigslist after seeing an advertisement my dad posted about a bike. They talked for a while, and my dad discovered that Jannik had not found a permanent place to stay yet. With that in mind, he jumped on the opportunity that was provided.

“Lately I’ve been thinking about renting this room out to someone since no one uses it. How would you like to be my first tenant?” My dad asked. “That sounds great”, Jannik replied. “You can stay here as long as you need to find a permanent home.” The next day, Jannik called my dad letting him know that he would like to move in. All he brought was a backpack, so “moving in” only took a few minutes since all he had to do was unpack his luggage. I was not home when my dad sold the bike to Jannik, so I first met him the day he moved into the guest room.

When people meet each other for the first time, they observe the other person’s physical features. Upon seeing Jannik for my first time, I noticed that he was Caucasian with light brown hair, green eyes, and glasses. He has been living in our guest room now for about two months, and over that period of time, I learned some things about him. He is a strong believer in equal rights for everyone, especially freedom of speech and religion, and he believes that Governments should do whatever they can to maximize the freedom of its citizens. He also thinks that people with disadvantages should be protected. Finally, I see him as a friendly, open minded, and outgoing person.

The story of Jannik’s immigration to America starts in the town of Altdorf, Switzerland. This is where he was born and raised until he decided to come to America. Jannik says that Altdorf is a very pleasant town. It is a small but cozy town, with a population of only about eight thousand people. Altdorf is in the center of the Swiss Alps, which is Jannik’s favorite thing about Switzerland. He says the Alps’ landscape is incredible, and no other place he’s ever been rivals it when it comes to beauty.

Jannik grew up in the central part of Switzerland, which is a primarily German-speaking region. However, he grew up learning Swiss-German, which is a variation of standard German. His childhood was very laid back, as he had lots of friends and enjoyed school since it was easy going and did not put a lot of stress on him. Jannik’s favorite childhood activities were seeing movies in the local cinema and swimming with his friends in the town’s public pool. He loved everything about his childhood, his hometown, the alps that surrounded it, and most of all, his community.

Jannik decided that he wanted to come to America when he was doing an internship as an engineer in Switzerland back in February 2018. He had a friend there named Liam that decided to immigrate to America once his internship was finished. “You’re going to America?” Jannik asked. “Yeah, start a new beginning,” Liam responded. This idea intrigued Jannik, as he has always heard many things about America. He had been exposed to American culture his entire life, which is one reason that America fascinated him. He always thought about living in America, but he truly wanted to immigrate there once Liam gave him that idea. It was that day that made him realize it was actually possible.

About three months later, Jannik began to write applications to universities all over America. Specifically ones that offered studies with autonomous systems. He had always been interested in working with autonomous systems because of his fascination with self-driving cars. As the next month went by, many of the universities he applied to either rejected him or did not respond back. He worried since he knew that he would have to be accepted by July if he wanted to be enrolled for the 2019 school year. Just before the deadline, a professor at Stanford emailed him to schedule a skype conference. Skype is an application where two people can talk to each other and see each other over their computers. Jannik and the professor discussed possible positions he could work at Stanford related to autonomous systems. He knew that this would not determine whether or not he would get accepted, so he continued to worry, hoping that Stanford would accept him. This was after all, his last hope. About a month later, he opens a letter from Stanford, informing him that he got accepted. This was one of the happiest moments in his life, as a feeling of relief swept over him. He would go to America!

That night, Jannik went out to celebrate with his friends at the local bar. He was happy, knowing that he would start a new life. He felt some sadness, however, because he knew that he would be moving away from his childhood home, and would rarely get to see his friends and family. He would be leaving in about a month, so he knew he needed to say goodbye to his friends and family and spend his last remaining weeks with them. He also knew he needed to schedule his flights and find a place to stay.

He looked on Airbnb, a website that offers places to stay, usually temporary. He found one place in Cupertino, California that looked good enough to him. He figured that he should at least have a place to stay for a few weeks after he arrived, and then worry about finding something more permanent. This is the place where he stayed for about a month, before the day he he saw an advertisement on Craigslist, offering a bike for a cheap price. The day Jannik was scheduled to fly out, his parents drove him to the Zurich airport, where he was to take off for his connection in London, and then for San Francisco International. He hugged his parents goodbye. “We’ll miss you,” said Jannik’s mother. “I will too,” he responded. As Jannik boarded the plane, he looked out the window next to his seat. He needed one last look at the beautiful alps, and one last look at the place he will still forever call home.

This story is based on an interview by Branden Pare-Lemley, a student at Palo Alto High School.