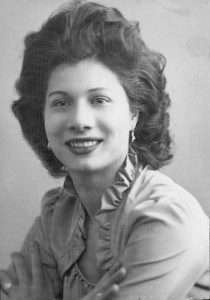 Vita was a young Italian woman who was born in 1934 and grew up in a small village outside Palermo, Sicily during the second world war. As a young child, she did not understand the severity of the war as the children of the neighborhood joked around with the German
soldiers. One time, three Italian girls were playing with a grenade when it exploded and killed all of them in a split second.

In 1947, when Vita was around 13 years old, her family decided to immigrate to the
United States and put their past, in Italy, behind them. Vita boarded a large boat with her two
brothers, sister, and parents. While it was a tough journey– illness, shortage of food, and
boredom– Vita and her family made it to the United States with the “American Dream” in mind.
In her perspective, the “American Dream” consisted of shelter and safety, rather than modern
day fame and wealth. She did not expect a lot from America as she simply yearned for a better
life.

A few weeks later, they arrived through Ellis Island and settled in Brooklyn, New York–
Vita’s home for the next six years. Upon entering 8th grade, Vita had trouble keeping up with the
other students due to her poor English proficiency. Nonetheless, she learned the language– partly
by watching Abbott and Costello television shows.

As her family struggled financially, Vita dropped out of school and started working as a
seamstress for the next ten years. Her siblings, on the other hand, never went to American school
because they were working full time.

A week before her 20th birthday, Vita married Tommy– an Italian man, 9 years her
senior, with a high school education. Originally, Tommy had a passion for acting and singing on
Broadway. However, he started working in the garment industry (managing a cutting room floor)
when he married Vita.

The newlyweds moved to the Bronx, a place known for its organized crime, for 14 years.
One time, Vita witnessed a teen boy get pushed off of an eight story tall apartment building only
to land behind Vita’s three story apartment building. Moreover, violence and mob shootings
were common events in the neighborhood. As a mother, Vita had to constantly remind her kids
not to venture out on their own or talk to strangers. Nonetheless, the Bronx fostered a sense of
community with its Italian restaurants, stores, and people. The smell of fresh cannolis from the
bakery and the sawdust stench from the fresh fish store lingered throughout Arthur Avenue.
Although Vita and Tommy were both Italian, they decided to not speak Italian to their
children because they did not want them to be ostracized from society. They had seen how Vita’s
older sister taught all of her kids how to speak Italian, which resulted in her sister’s son being
sent home when he started kindergarten because he could not speak English. He could not return
until he learned English.

Vita and Tommy, as laborers, did not make enough money to pay for their childrens’
college tuition. Debbie, the middle child, decided to pay for her college tuition by working 3 part
time jobs (clothing store assistant manager, tutor, and exercise instructor). Between a busy
college schedule and working 40-45 hours a week, Debbie became the first person in her family
to earn a college degree– BS in Business Administration– Summa Cum Laude. Meanwhile, her
older sister went to a trade school and her younger sister dropped out of college during a tragic
time when Vita was very ill. While living in the Bronx, one of Vita’s biggest milestones was
getting her driver’s license after having 3 kids. She spent long days taking private driving lessons
until she finally passed the test and surprised her husband with the license. Although she never
drove on the freeway, or learned how to back the car out of the driveway, getting a license gave
Vita a feeling of independence.

In the late 1960s, Vita and her family moved to Rockland County, New York – a
suburban area located 25 miles north of Manhattan. This was a huge change for her and her
family. Her neighborhood was home to people of all cultures such as Greek, Italian, and
Spanish– all of whom wanted a better life for their children.

Debbie, Vita’s daughter, said that her mother did not share many memories from her
childhood. Similar to many immigrants after World War II, Vita wanted to move forward as an
“American” and assimilate into the new culture. In fact, Vita never went back to visit Italy and
claimed she never missed it. Lemons, however, were one of the few happy memories she had of
Italy. Vita ate a lot of lemons back in Italy, and continued her habit of sucking on lemons when
she came to America. She also enjoyed making home cooked meals such as eggplant parmesan
and ricotta (Italian cheese pie) as cuisine was an important part of Italian culture.

Unfortunately, Vita fell ill for the last 10 years of her life and passed away at 59 years
old. In memory of her mother, Debbie wrote a memoir about those 10 years titled, Vita’s Will.
She also made an effort to brush upon her Italian she learned in high school classes and visited
Italy several times– Florence, Sicily, Rome, Tuscany, and the Amalfi Coast. While touring
southern Italy, she said that “hearing people speak Italian reminded [her] of growing up.”

The interview and subsequent narrative were done by Dorreen Darya-Bari, a volunteer for the Made Into America project.