From Desserts, to Fruits, to Family (Taiwan) 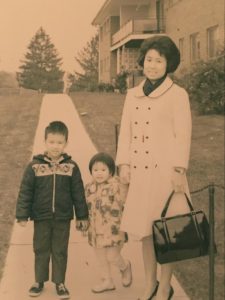 My grandmother with my mom and her brother, out in front of their house on the first day of school.

Taiwan, an island whose population is less than that of Shanghai, is the island where I grew up. I lived in the capital, Taipei, with my mom, father, and with my younger and older sisters. Life was enjoyable; my mom worked in the government and my father was a teacher, so financial issues were the least of my problems. I always dreamed of eating western desserts, instead of passionfruit, longan, lychee, or whatever other native fruits occupied our kitchen counter. In the future, I would learn to appreciate what I have, and especially these fruits, that I usually saw as just regular counter ornaments. Up until the age of seven, my biggest worries were if my older sister would wake me up with her scary dolls or whether Elvis would be performing in Taiwan anytime soon. All of this soon changed for me, and surprisingly, in the long run, it changed for the better.

In 1949, the Communist Army was threatening to invade Taiwan, which soon made my daily life change for the worse. We were still well fed at home, but we could not go outside in case of war and its chaos. Schooling was very strict in order to keep kids out of trouble and in their homes studying. The American-Chinese School I attended soon would help me for the better, although I was regarded as the class clown. Sometimes I had to spend extra time at home learning English. Little did I know how helpful this would soon become. As I turned 17, I came home after an unusually hot and humid day, with my mother asking something of me that would change my world forever.

She asked me to sail to America, as planes had many unpredictable variables, and a boat was much more reliable. She did not want the war to affect me and told me to pack up my stuff as soon as possible. I was excited more than anything! That same night thoughts were racing through my mind, Elvis Presley, American desserts, parties! I packed all my luggage in one big brown suitcase and slid in some slightly yellow stained photos of my family and grandparents. That night as I was leaving, my family waved me goodbye, but as I closed the large oak door, my mother stopped to give me something that I could not have predicted. Something that I still have to this day. Her gold wedding ring. She said it was to bring me luck, and that she and father both agreed this would be okay. Their relationship is stronger than anything I have ever seen. I didn’t hesitate or ask why I was the only one going, as I knew politicians could not leave the country and had to have polite, studious, and well-behaved poster children in the country, to serve as a good public image. I was definitely not one of those kids, but what did I care, I was going to America!

That night, I boarded the large freight boat with many others who were fleeing the country. As I boarded, I noticed the waves were not lapping against the shore, and the air was warm, with only the stars lighting up the ship. It was only a matter of seconds after I boarded that the boat shifted and let out a small horn to announce its departure. We were soon served dinner in the white dining hall, with two adjacent buffet lines where I was served bright yellow fish and hairy crabs: blue crabs, juicy and small with meat white and tender as cooked jackfruit. That night, I ate the most crab I ever had in my life, the yellow fish and the hairy crabs were cooked so deliciously, and I ate until they closed. The seafood cooks from Shanghai made every meal something to look forward too, as the living conditions were subpar with two small bunk beds on one side of each room, and a small desk on the other. My roommate was also a politician’s kid who had many siblings, and again she was less perfect of her siblings, same as me. That meant we both got the golden ticket to America! After a long-awaited month, we arrived in glorious America, Los Angeles to be exact, and I was more excited than I had ever been.

My paperwork was all set because of my parents working hard, day and night days before I left, and so I left the boat to see the wonderful spectacle shown in the newspapers all throughout Taiwan. As soon as I got off the boat, it was chillier and less sunny than Taiwan, the air smelling clean like flowers in my parent’s small garden. I started to look for a job, walking down the streets with nothing in particular in mind. Many Asian Restaurants were looking for Asian-Americans to work for them, supposedly wanting an “oriental feeling,” and I thought what better way to learn about American culture than to integrate both food and my own culture to restaurant life in America, which proved to show me the differences between the two. I walked into a Japanese Restaurant, with the little I knew of “arigato” and “ko ni chi wa,” and told them I could work as a waitress. I thought learning a third language would be fun and a good challenge, little did I know how much I would soon have on my plate. That same day I was hired with an hourly wage of $2.75, and a tight dark purple kimono with a thick light rose colored ribbon I tied around my waist, to mimic the customs of those in feudal Japan. On the first day of work, I was talking with my fellow Asian co-workers, who were also immigrants, and we decided to choose a small apartment in the inner part of the city where we could split the rent. It was surprisingly easy, with the influx of customers being plentiful and the tips generous. At the end of that long day, I was expecting a meal to be given to us just like any restaurant gives their employees, but instead received a bowl of rice with drizzled soy sauce, what? I asked where the rest was or where the employees would eat, and I was promptly told that was all there was to it. “Japanese restaurants and their absurdly small portions,” I murmured under my breath. I ended up spending half my paycheck on shrimp and seafood to go along with my soy sauce rice, and couldn’t try any of the American desserts that were advertised all around town because of this. I wouldn’t be able to pay for rent if I kept buying this much food after work, so I finally worked a small job at a laundromat for a couple hours a night where they gave us small meals from a local burger joint.

The fruit markets that were plentiful in Taiwan were non-existent in America, with the only exotic fruit being mangos in some expensive supermarkets, all which were displayed having black spots and no fragrance. The apartment we shared was surprisingly spacious but bland and infested with creatures I never saw, but I always felt were watching over me. Overall America seemed like a somewhat lackluster country with mostly show and no substance to back up its appealing image, not the dream country I imagined my whole childhood.

After 1 year of working, I moved to Maryland, where I attended a local college, Saint Benedict University. My mother in Taiwan sent money to fund my college tuition, and my room and board. I really miss my family, I wondered how they were doing… I wouldn’t even mind waking up to my sister’s dolls as long as I got to see her again. During my residence, I performed well in school, except in Middle-English, in Chaucer’s Canterbury Tales, that stupid Old English, thy this and stupid roots. How could people read back then? One of my favorite memories was the parties. Many parties were hosted for the Asian American population all throughout St. Joseph, where I met people, who after a first glance, chased me all throughout college. This one party sophomore year, I met Erwin, a charismatic, nice, friendly, young student just like myself. One year later into college, we got married. We soon had our first kid, Allen, who gave me a second purpose in life.

The adventure from Taiwan to America was a tough one, but was all the worthwhile. I learned many lessons about how to budget financial, social, and educational expenses while learning about a new culture. One big thing I learned from my migration trip is how different cultures can be, regarding values, especially when it comes to food. I overall enjoy my life here in the U.S., in San Francisco, California, with my two children. They are doing great, pursuing vocations that suit them well, Allen living on the East Coast and Connie on the West Coast. This trip has taught me about changing, adapting, and learning about new things, all of which are lifelong skills that have helped me through everything I have ever done, whether in Taiwan or America.

Mary’s story of was written and recorded by her grandson, Peter, a student in Palo Alto.