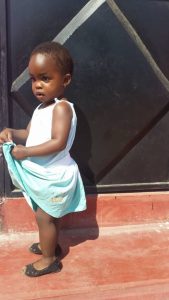 This is a picture of me after my mom moved to Oakland, California.

My name is Sylivia, I was born in Bukoba, Tanzania on April 14, 1979. The early days in my hometown Bukoba are still in my fond memories. I grew up with my younger sisters under our loving parents. My father was a businessman, and my mother was a house mom. Our parents worked hard and afforded a decent life for us. I miss the sweet taste of tilapia from Lake Victoria and the delicious fingerlings from Lake Tanganyika. My mother cooked delicious food, especially the fingerlings, which in Kiswahili are known as dagaa.

Kiswahili is Tanzania’s national language. It is also commonly spoken in East Africa and other parts of the world. Mwalimu Julius Kambarage Nyerere, Tanzania’s first president, used the language as a tool to unite more than one hundred and twenty ethnic communities found in Tanzania. Kiswahili became the language used for instruction and in every aspect of life. I was an excellent speaker of Kiswahili and still have not forgotten it much. In the morning we greeted, Habari ya asubuhi? In the evening, Habari ya jioni? The greeted person would answer, Salama au njema. For goodnight, we said, usiku mwema. I must tell you that it was taboo for one to pass by one’s elders without saluting them with shikamoo, which means, I submit. This culture is still practiced in Tanzania to date.

After finishing school, I met my husband Tom, and we got married. Tom lived in the US, and so when we married, he took me back with him. Leaving my close family of parents, sisters, aunties, and uncles was not a good feeling at all. Besides, I was going to miss my mother’s delicious fingerlings, matoke (bananas), the aroma of rice and stew that greeted me when I returned from school, the sounds of birds chirping in our woods, and so much more. Nevertheless, moving back with my husband was the only logical thing to do.

It was one late afternoon in January 2003 when I boarded a flight from Julius Nyerere International Airport (JKIA) in Dar es Salaam, Tanzania, to San Francisco via Dubai and Los Angeles. It was my first ever flight, and so it was a fantastic experience. The sheer size of the plane and its maneuvers. People of all colors and languages. The ambiance inside the plane. The dazzling hostesses. The food. Everything was just marvelous. The only discomfort was the language barrier. I had difficulties communicating with people. When spoken to, I found myself having to ask people to repeat themselves. In my Tanzanian politeness, I would say to them, samahani (pardon me or excuse me). All in all, I was so captivated I did not overthink about my people during the flight until I touched down in San Francisco.

When I arrived in California late January, the weather was unpleasant. It was so cloudy and cold. I almost froze. It was a while before I could get used to the unusual weather. My husband and I lived in Oakland for about half a year. I was shocked to encounter so many homeless people, many of them looking rugged and confused or under substance influence.

Here, I also had language difficulties for I did not speak much English then. I always needed a translator. Soon I met Josephine Masabala in San Francisco, one of my first friends whom I came to regard as a mother to me. I readily agreed when she requested me to babysit her kids. I agreed, partly because I was idle and partly out of my love for children. I had enjoyed babysitting my own younger siblings for my mother back in the day.

Apart from the unfriendly weather and the language barrier, food was a challenge too. It took me time to get used to the things eaten there. My husband would take me to a taco truck for a burrito. The aroma of chicken and steak made it smell like pancakes on a Sunday morning. I hated it, though, because there was too much cheese in it. As I went about the neighborhood, I noticed that houses here were not made of brick and hay like in my home country.

Three years since arriving in the US, precisely on January 9, 2006, I took a job as a medical assistant (maternity/delivery). I enjoyed interacting with workers and new mothers and handling the newborns. I enjoyed the smell of baby oil and baby powder. Over time I have brought forth my own three children. My first child Malick was born on May 17, 2004. Raising my children as a single mother is something I regard as one of my greatest successes. I hope to go back to school to study nursing and become a nurse one day. My motto is to stay healthy and to love myself.

This story is based on an interview by Malick Ishengoma, a student at Eastside College Prep.