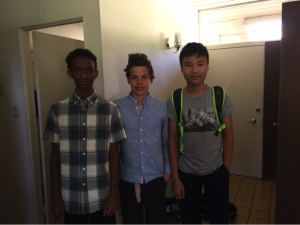 Many people have very dramatic immigrations stories, but the truth is not everyone does. Moving from Austria to America was definitely an experience, however it wasn’t a particularly difficult one, and in the end I really thought it was a good thing. Most of my struggles were pretty typical for people moving from their home. For example, I really missed my friends. On top of that, at first it was a little bit difficult to meet new people, due to the language barrier. However, I consider myself an outgoing and social person, and it didn’t take long before I started to make new friends.

America is different from Austria in many ways. One thing that is different is the size of the country. In Austria you could drive almost anywhere you want within a couple of hours, but, in America, that is far from the case. Another thing is American schools. I feel like everyone is far less intelligent than in Austria. School is so much easier, and teachers are far more helpful. This was one of my favorite parts of America.

The hardest part of moving for me was making close friends. Sure, I met people in my classes, but I felt like it wasn’t the same as it was in Austria. This was when I began to realize the difference between “acquaintance” and “friend.” Acquaintances are people you are nice to and talk to in class, but friends are people who you always hang out with and feel completely comfortable around them. Friends are who you can talk to about anything you want, no matter how crazy, dumb, or personal it might be. I started to realize I really missed having close friends, and I made it my goal to go out and find some.

It all started with this kid named Michael Sun. I had him in six out of my seven classes, which was convenient and made it much easier to become friends with him. We hit it off right away. The main reason we became really close friends was a video game called “League of Legends.” Before I met him, he played a game called “DOTA,” which is in the same category of League of Legends, but not quite the same game. Since I had been playing League for a while, I decided to introduce it to him.

“Hey man you should try playing League of Legends instead of DOTA.” I suggested.

“What is League of Legends?” Michael responded. I explained to him how it is similar to DOTA in many ways, but it is slightly better, in my opinion. It didn’t take him long to get him addicted to the game, and before we knew it we were playing all the time.

At first, my social group was just Michael and I, but eventually I met some new people who played League of Legends, as well. I first met a guy named Alex Hu in my P.E. class. He heard Michael and I talking about League and he decided to join. After chatting with those two for a while, a third guy joined the conversation. His name was Jordan Green.

“Hey, are you guys talking about League?” He asked curiously. “Yup.” I replied. We soon became good friends and started sitting with each other at lunch at this one spot. Everything went well for a while, but something happened that changed our group. There had always been a tension between Alex and Michael, I’m not quite sure why. Maybe it was because they were competitive about their Chinese. They were always insulting each other and they obviously didn’t like each other very much. One day, we all went to Jordan’s house to play League, and the tension finally formed into something real.

“Hehe,” Alex giggled as he turned Michael’s laptop off. At this point, Alex most likely thought Michael wouldn’t do anything about it, because he had not previously shown any signs of aggression, and usually just brushed things off, but this could not have been farther from the truth. Michael launched from his chair and latched his arm around Alex’s neck.

“Oh shit! Michael chill!” We all exclaimed. We were all too shocked to really do anything. He then began to punch and kick Alex for what was probably half a minute, then sat back down. We all sat there in shock, and watched as a mortified Alex sat back down at his chair, clearly shaken up. Since Jordan was in the other room he didn’t even know what was happening. For the duration of the League game, which was about 30 minutes, we all just acted like nothing happened, even though on the inside we could all feel the tension from what had previously happened.

After the game ended, Jordan came out of his room and we told him what happened. He decided to take charge of the situation. He asked them both to apologize to each other and tried to get them to make amends, but the tension stayed alive even after this day, and took a long time to fade away.  This was a very dramatic experience for me and was unlike anything I had ever experienced in Austria. “Is America always this dramatic?” I asked myself. I started to become worried that moving to America was a big mistake and that I would never have friends like I did back in Austria.

Later that day, I talked to my mom about what had happened, and she told me to talk to my friends about what happened, and try to solve it instead of completely losing hope. She made me believe that I could really make our friendship work and I wouldn’t have to lose hope after all. The next day at school, during lunch, I brought up what happened the day before. I told Michael that it was not okay to physically abuse someone just for turning their laptop off, and told Alex that he shouldn’t try to provoke Michael like that.

“Why do you guys not like each other in the first place?” I asked, hoping to alleviate the tension between them. “To be honest, I don’t really know.” Alex said. “Same.” Michael laughed. They began to realize the meaninglessness of the whole situation and started to become friends after that. After making amends between Michael and Alex, I felt like my hope and been resurged. I felt like our friendship was now even stronger than it was before, and that maybe America will be even better than Austria.

This story is based on an interview by Jordan Green, a student at Palo Alto High School.