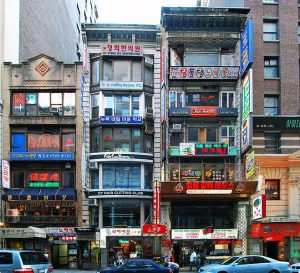 Focusing on improving his golf game and visiting family, Jack Jhin lives his life relaxed. At 81, Jack has been through countless tales, both wonderful and terrible experiences. For this story, he recalls his journey to America and his life there as a first-generation immigrant.

Growing up in Seoul, South Korea, Jack Jhin was very fortunate. Coming from a family involved in high positions, like his father who was a senator, or his grandfather who was a governor, Jack had a blessed childhood and upbringing. Born on March 14th, 1935, Jack attended the prestigious Yonsei University in Seoul for English literature before joining the Korean air force, where he would work his way up to the appointed position of Major during his thirteen years in the armed forces. Eight years into his service, he would meet his wonderful wife, who he would raise his four daughters with, and, at the same time, work as a Liaison between the US and Korean air force during the Vietnam war. And after settling into a new job at the Korean International Airport, at 33 years old, Jack didn’t hesitate to take the opportunity to work as the General Manager for Korean Airlines in Hawaii.

Even though he was well-off in Korea, with money, a house, a maid, and family, Korea’s poor economic state, North Korea’s threats, and the projected image of the American dream was more than enough to convince him to move. And so, anxious as ever, with a goodbye to his family in Korea and a plane ticket in his hand, Jack embarked on his journey to the USA. Arriving two months before the rest of his family, with the flight and work visa covered for courtesy of Korean Airlines, it was merely a simple trip over the Pacific Ocean. Jack was beyond excited to be in the land of the free and with the gorgeous aesthetic of Hawaii; he believed he was truly in paradise.

After finding a place to live and settle into on the island of Honolulu, Jack brought his family over, and they crammed themselves in a small two-room apartment, where they would reside for the next four years. Jack recalls his first experience in America as a friendly one. All the people made him feel incredibly welcomed and received help from the pre-existing Korean community. And with previous experience with the United States during the Vietnam War, a major in the English language from college, and an accepting nation, Jack was able assimilate quite easily to the American culture.

Although, not everyone in his family assimilated quite as easily. Language presented issues for Jack’s four children and wife, who had little to no experience with English, and adapting to American culture was challenging with instilled Korean values. Regardless, the Jhin family continued and struggled on within the new foreign country, as well as with more expansion from Korean Airlines across the United States. Within the next couple years, Jack and his family would move from Hawaii, to Michigan, to Washington DC, and finally to New York in 1979.

With lots of friends and a multicultural vibe which consisted of 189 countries, out of all the places Jack Jhin had been so far, New York, New York was the best. The people were kind, the city was big, and everywhere you looked you could see the dreams of the American people in their businesses. Things were going great and looked even better when, in 1980, Korean Airlines offered Jack a job as the Vice President, with the catch that he would have to move back to Korea. However, convinced of the power of the American Dream and the fact that his preteen daughters had been fully immersed into the American culture, he declined the offer and quit his job.

The first thing that Jack noticed after quitting his job was the racial prejudice. Even with a college degree and years of experience with Korean airlines, he could not find a job. This came as a surprise to him because Jack’s experience in America up to then had been all welcoming and smiling faces. The second thing Jack noticed was that life was hard without a secretary to help micromanage all the things within his life. He would now have to do all the little things he had handed off as an executive.

Faced with this jobless dilemma and without much help, Jack decided to start his own business, specifically, opening a restaurant. He used money from a Korean community loaning system called Gae (pronounced like the k-aa), which is when everyone every month pitches in a certain amount that is handed out to those who need it. Jack used this starting loan to open an American diner in a Manhattan hotel. For the first time since he came to America, Jack was working and breathing the American dream that so many had done before.

Owning a business was not easy. Working long hours and seven days a week compared to his executive lifestyle was difficult. He had to learn many new things, and his wife, who was a housewife, had to go to work with him for the first time. Together, they faced many challenges and hardships and as a result, spent less time with their kids. In fact, they even missed many of their children’s parties and milestones, such as high school graduation and school performances; often the kids had to take care of themselves.

For the next ten grueling years, Jack and his wife worked day in and day out, and although they couldn’t see themselves reaching their own dreams, they could see their children accomplishing theirs. Jack and his wife believed in their kids’ success and began to see what was truly what they envisioned in the American Dream. In the end, although the restaurant did not reach success from their promising start to their laborious end, all of Jack’s children ended up successful and paid back. The eldest became a banker, the second eldest became a doctor, the second youngest became a lawyer, and lastly, the youngest became a public relations representative.

This story was written by the immigrant’s grandson, a student in Palo Alto.