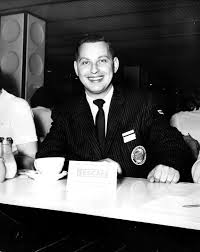 1958 when working for the US State Department

Born in Germany of Jewish parents, I was whisked to Belgium when I was 6 years old. I survived the Holocaust in the underground  – hiding in Southeast Belgium. After the liberation, I excelled in school and also was active in youth activities. I came to the US in 1952. I was 19 years old when I arrived alone in the US. I borrowed the fare money from cousins who lived in Baltimore, Maryland.  Then I  served as a soldier during the Korean war. I became a US citizen while serving in the 82nd Airborne Division at Fort Bragg, N.C. on November 24, 1953. 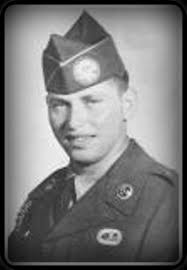 My parents emigrated from Belgium 15 years after I did.

In 1956 while vice president of the International Club of the University of Maryland I jump started televised presidential debates with the personal support of Mrs Eleanor Roosevelt . The Associated Press and UPI provided national coverage of my novel proposal , I got the conversation started where before it was judged an anachronism. It led to the first presidential debate on September 26, 1960. Read more details here.

I am credited for my numerous activities as one who is devoted to the country and our community. I was also on a state of Maryland task force appointed by then Governor Ehrlich, Jr, to implement Genocide, Holocaust human rights and tolerance education in the Maryland university system. 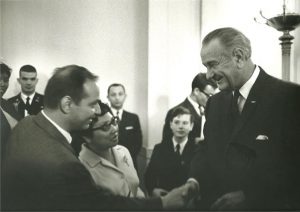 with LBJ when wife, Rita became a naturalized citizen

I served 29 years as a political economist for the US federal government under six presidential administrations. Retired, I continue to serve, managing a worldwide listserv/ group to promote human rights and tolerance education. “REMEMBER_THE_HOLOCAUST.”