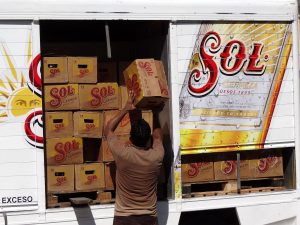 Diego (name changed) was born in Guadalajara, Jalisco, Mexico in 1980. He worked as a merchant. He unloaded the goods from the trucks. He earned good pay on it but he decided to come to the United States because he had some problems with dangerous people. These people were looking for him. In the city where he lived there were a lot of gangs and drug traffickers. The only thing they want is to take the money from the people. He had brother-in-laws that lived in the US and who could employ him temporarily.

He crossed the border in the trunk of a Toyota Camry with five other people inside. It was very suffocating and he couldn’t breathe well. There were two other people in the passenger section who had legal visas. When he arrived he was 24 years old and he had his wife here. She crossed the border with a legal visa. One difficulty when he arrived was the language because he didn’t know how to speak English. He thought that in the United States the people didn’t speak Spanish but he saw a lot of Latinos.

His plan was to work for 6 or 7 months and go back to Mexico but he stayed with his wife and they started to rent their own house. After a while his wife became pregnant and he had to work more. He had to save money because he had to pay the “coyote”. His first job was landscaping and he earned $7.50 per hour. He had to pay rent, buy food and that money was barely enough for other necessities. It was a bad time for him. He had another job at night as a waiter in a bar.

He misses his family and his friends. His family did not want him to leave, but it was necessary for his problems. Now he’s applying for his legal residency and he plans to return to Mexico to visit his family and friends. He’s working for a construction company and he gets paid well. He lives with his son Javier, his daughter Flora and his wife.

This narrative was written by Diego’s son.