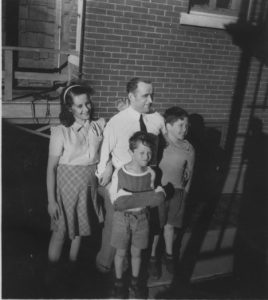 Harry Knopfer and his family

The trees whizzed by me; I knew that if I stayed much longer I’d be killed. In the days right after the first World War, you could never trust anyone. After what felt like hours of running, noises and light began to appear. The hammer of a blacksmith, the cry of a baby. This is what I’ve been looking for. After finding a house that was on the outskirts of the town, I broke in.

The water and food tasted delicious, as hours had gone by since my canteen went empty. Leaping from around the corner with a pipe, a man ran at me. I must have jumped two feet in the air, but by the time I had landed the crack of my rifle had already gone off. The bang rang through the town while the bullet ripped through his chest. Hearing the clamoring of people outside, I knew I had to move quickly. Slinging his body over my shoulder, and running back into the trees, I figured I had found my break.

Once I reached what seemed to be a safe clearing, I removed my uniform, while taking this man’s clothing. Unfortunately, he was almost 3 inches taller than me, and this made the swap difficult. My dog tags clinked and clattered, while settling for the last time on another man’s chest. After it was done, I knew I could finally escape. I was no longer me. Now I’m twenty year old, Joaquima Harry Knopfer. Huh. Maybe I’ll work on that later.

Using my new name, I scammed my way onto the New Rochelle, a civilian vessel heading to New York City. I didn’t have the money for a ticket so I stole a few loaves of bread and used them to bribe the cargo loader. I was just one of eighteen hundred people in third class and just an average guy, maybe a little shorter than others, but that’s beside the point. I was trying to make a life for myself in the promised land. The dilapidated steamship was as old as me, and barely went as fast as I could run. I’d be at sea for nearly two weeks in a glorified metal box with a smokestack. Oh boy.

“Name?” the American growled. “Harry Bernard Newman.” “Fill out this form of naturalization, and get back in line when you’re done.” This all seemed so strange. Just a few months ago, I would have never been in Ellis Island, or outside of Poland for that matter. Hell, I was running the general store of my dad, Israel Knopfer, back in Yastkowice before I got drafted. The ship, the cities, the modern technology, and cars simply blew my mind coming from a small Jewish ghetto.

Directly after I came to New York, I traveled to Detroit to see my brother and my wife, Minnie, who had both traveled previously. “Minnie? Is that you?” As we embraced, she shrieked almost as if she had won the lottery. “My goodness, I missed you.” she exclaimed. “I can tell you did,” I said, “you nearly ripped my ear off with that scream.” As it was, people said my ears were already too big.

I worked long days at the local grocery store, but it paid off. I could afford a family of my own. I lived in America, safe and sound, and I didn’t have to be in the army any more. Every day I came home to my family, looked into my blue eyes in the mirror, and was thankful for what I had. However, times were getting tough, my beautiful family was growing, and I needed more. This led to money laundering around the time I had my son.

“Sweetie?” she said. “Yes, Minnie?” I responded. “I’ve got to go.” Minnie quickly urged. “What do you mean ‘I’ve got to go,’ it’s the grand opening of the second grocery store!” I had no idea. “My water just broke.” Oh boy, did I drive like a maniac to the hospital, and I had one of my beautiful baby boys. I named him Morton.

By the time of the tenth grocery store, I was slowing down. I had changed my name many times to dodge the law and the less-than legal people after me – Harry Bernard Newman, Harry Newman Knopper, Joaquima Harry Knopper, the list goes on. My boys had taken over the bulk of the grocery store business, but even that wasn’t enough. It’s a difficult business to make money in; the profit margins are low. To add to the risk, the net was tightening around me, and if I went down my sons would too. Not only that, but Detroit was having a hard time too.

The civil rights movement and the riots had been hurting business, plus the economy was declining as quickly as the whites left. Pretty soon it was just us in a neighborhood where potholes were as common as trees had once been, and there was nothing left except for the backup plan. Some people say the fires that eventually engulfed many of our stores were an act of god. Others say it was the gentiles coming after the Jews trying to make themselves a living. I’ve even heard that it was the blacks turning on the white businesses in the area. However, and I’ll never admit this, but a small minority of people say it was Jewish lightning, or for the goys out there: “It doesn’t matter, the insurance company paid off.” Either way, Minnie, Danny, Morton, and I came out just fine with our health, happiness, and most importantly, our hard earned wealth.

Unfortunately, all good stories come to an end sometime, and my final fight was soon to end. At the turn of the decade, I had found out about my heart disease. Easily treatable if found early, but my life of smoking and stress had caused severe angina. Morton, being the good doctor in the family, tried his hardest to keep me alive. He even performed CPR in my bed.

It’s hard to believe that I fought so hard to bring my family to America, and they would fight to keep me here. The medicine to treat angina was released widely just a few years after my death, which I’m sure pained Morton for years to come. It’s ironic, how hard I fought, and I’m glad I made such an impression that they fought for me in my final moments. I might have only lived for sixty-two years, but I did everything I wanted to do, and I did it on my terms. I refused to fight when I didn’t want to, and when I knew I had to fight, I did. I fought for my family, I fought to come to America, and I fought to keep my wealth. I made my family and gave them all that they needed to succeed, and I hope that they don’t have to fight nearly as hard as I did. I know I’ve given Minnie and the kids the tools they’ve needed to make it through life, and I hope they can learn from what I’ve done.

This story is based on several interviews of Harry’s grandchildren by Benjamin Knopper, his great grandson, and a student at Palo Alto High School. More information can be found at bgp.nu/~mak/NHK_Web/