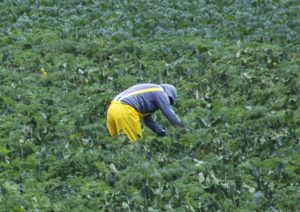 My uncle Alejandro (name changed) was born in 1980 in Guerrero México. He came here because in his town there was a lot of work but it was not very well paid. Alejandro started working in the fields when he was 10 years old. He picked corn ,peanuts and beans for about 6 years . He realized that he could not survive on his pay and the work was very hard. His friends talked to him about the United States and he did not think twice. His father agreed with his plan to migrate, but his mother did not agree. Even so, he decided to come.

He knew that getting here would not be easy. He spent 14 days lost in the desert with his 3 friends. The food they were carrying lasted for only 12 days. While they were in the desert, one of his friends fell and sprained his ankle badly. Their only option to survive was to turn themselves in to Border Patrol officers. They had to go back to Tijuana. A week later, they tried again. Despite everything they never gave up and they reached the U.S.

As soon as Alejandro arrived, he began to work in the fields picking peaches, grapes and apples. He decided to do that because in that job he did not need to speak much English. He began to notice that many immigrants learned to speak English in school. He would have liked to go but he did not came to study he came to work to help his family, even though he was only 16. He only studied until middle school in Mexico.

After about a year, he moved from Fresno to San Jose. His friend told him about work doing construction.
A couple of years later he met my aunt and they had 3 children. He still doesn’t speak English. He was injured at work and he is not working now. When he gets better he will look for another job. His family is the reason why he has not visited Mexico. He doesn’t have papers and he knows he might not be able to come back. He does not want to go back Mexico to live because he knows that here in the United States there are better schools and opportunities for his children. It has been 18 years, and he hopes to return to see his parents and siblings, one day.