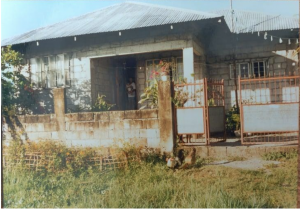 front of first house in the Philippines, owned by her husband and his family

Growing up, my parents loved talking about their childhood in their intimately small community of San Fernando, Pampanga. My dad would relay stories about coming home from school and riding his bike around the neighborhood shouting “Pandesal! Pandesaaal!” trying to get people to buy his family’s freshly-baked rounds of sweet, warm and crispy bread. My mother would talk about all of the high school and college boys that tried to court her as she sat on the second floor of their home in Bulaklak (flower in Tagalog), coyly displaying the Victorian sensibilities that were popular with women at the time. Both, at one point, had even expressed their desire to purchase a plot of land and retire there. That’s precisely why I often had to ask, “So then why did you come here?”

“Opportunity.” My mother said with certainty. My father often agreed and reiterated the same message, so it wasn’t all that foreign a concept to me.

My mother is this 5’7”, headstrong Asian woman who values being the “pretty woman” of her family. She grew up in San Fernando, Pampanga in the Philippines with 11 siblings. She came to the US with 10 of her 11 siblings, their spouses, and their children. They all lived in a cramped, one-story house before each small family earned enough to move out and rent places of their own.

“Life here is easier than in the Philippines. I can say that because there’s a lot of poor people in the Philippines and unemployment [compared to] here. By the time I got here, there were a lot of job openings. I easily got a job.”

She went on to list all of the careers she found herself in: a caregiver at a retirement home, an employee at a distribution center, a production worker for Ross and Nordstrom, an assembler at the now-defunct electronics manufacturing company Solectron, and a cashier and photo associate at numerous other retail stores. In the Philippines, she worked one job.

“I work only in our store in the Philippines as a sales lady.”
“Huh? Did all of your siblings do that?”

“So then how did you all make the money to get here?”

Turns out, it was all thanks to my grandmother. She was a businesswoman, and the boss of the very store my mother worked in. She worked hard, and made her kids work hard too. The shop carried handbags, shoes, perfume, and shampoo.

“My sister and my father worked in a sugar development company. My brother who got here first was a nurse, so he gave us and our parents some money to survive in the Philippines” she explained.

Their biggest fear? Poverty. The mantra of hard work and making money was constantly in her face, having been surrounded by so many instances of fellow Filipinos unable to afford basic living. Children walking around on the hot concrete without shoes, the visibility of rib cages of starving citizens, classmates having to drop out of school to work for their families, and much more. It was hard work to come here, but they all wanted—no, needed—the land of opportunity.

“[If I stayed behind with my oldest brother, my life would] depend on the work that I have, and depends on how many kids will I have too, because having a lot of kids in the Philippines is very hard. And probably, if I married a good man with a good job, then probably I will also have a stable life there, but not as stable here.”

Since coming to the United States, my mother worked numerous jobs until she got pregnant with me. My father had luckily been hired as a stationary engineer at a nearby hospital and made barely enough to get us by while my mom stopped working. She gave up her career to focus on her relationship with her daughter and her husband because to her, “family is priority, above career, above anything.” The only jobs she took up were caring for the new young ones of non immediate family members while their parents got back to work. After our family had save enough, she finally got to experience a lot of the “American” vacations she dreamed of. Snow in Lake Tahoe, the mountains and nature of Yosemite National Park and Muir Woods, city life, and the beautiful beaches. She created her life here with her family, grateful to how much she worked to get where she is now, and finally saw Disneyland.

This interview was conducted and narrative written by Abigail Manalese, a student at Foothill Community College in Los Altos Hills, CA.