Family From the Netherlands Make a New Life 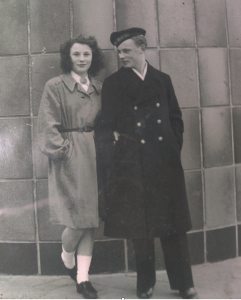 Fred and Thea Limburg in Rotterdam, years before immigrating to the United States.

In October of 1961, Fred and Thea Limburg began their journey from Rotterdam, Netherlands to California. This wasn’t just a spontaneous decision though- it came after years of hopeful planning. After talking with her sister-in-law, who had recently moved from the Netherlands, to Indonesia, and then to California, they both agreed that they felt extremely lonely in their lives. Her sister-in-law began to encourage Thea and her family come join them in the United States. It didn’t take long to convince her husband, Fred, because they both agreed that there would be much more opportunities for them both, as well as a chance for a better education for their four young boys.

It took about two to three years to get affairs in order and get everything taken care of for their sponsorship, and when it was finally time, the family was so excited to begin their journey. They packed light and only brought the essentials for their move. The most important part was that they were able to go on this new adventure together. Thea’s biggest concern wasn’t so much of having to leave the only life they’d known, but more so that her, Fred, or one of their boys would get sick along the way. This was their first big travel together.

The first part of their trip was on a plane that took them from Rotterdam to New York. After that, they began the trek to Orange County, California via train. Although no one got sick on the plane, Thea was extremely sick during the train ride, so she had the boys stay on the upper deck to keep them separated. This caused some stress, but luckily her sons were all well-behaved and her husband was able to bounce back and forth between her and them.

It was on this train trip, that she had the first realization of the change that was about to come. For the first time in all five of their lives, they had seen a black man. At that time, there were not any people of color where they lived. It created for an awkward situation because the only person of color that they had ever heard of was known as “Zwarte Piet”, who is a character associated with “Sinterklaasavond” (St. Nicholas’ Eve.). Upon seeing this gentleman, her sons got extremely excited and thought that he was there to bring them presents and sweets. It took a bit of effort for Thea to get them to quiet down in all of their excitement and stop calling the man “Zwarte Piet”.

When they finally made it to Orange County, the family stayed with Thea’s brother-in-law and sister-in-law until they were able to buy their own home. They faced many challenges upon their arrival, such as not being able to speak or read English and adjusting to the different foods and currency, but they were grateful that finding a community was not difficult. Aside from their two family members, the neighborhood that they moved to was a giant melting pot of immigrants from all areas of the world. Some of their closest friends were from Japan, Mexico, and Russia. Thea remembers initially feeling afraid and nervous about language barriers and the chance of feeling isolated, but was relieved that everyone in their community was in the same situation, with the same goal- to come to America for better opportunities for them and their families. Thea recalls this experience being a very welcoming one.

The family members tackled learning English in different ways. Being a housewife, Thea learned English through watching a lot of television (some of her favorites were “I Love Lucy” and later, “The Price is Right”) and also practiced comprehending English by reading newspapers. Fred and the boys were thrown into language immersion a bit quicker though. Their sons picked up English through going to school, and Fred learned through his job as a custodian. Thea believes that his work as a merchant marine in the Netherlands also aided him in picking up English faster.

One of the biggest adjustments Thea dealt with upon arriving in America was having to relearn things such as food. She recalls having a friend bring her a delicious looking pastry with a cherry on top, to later bite in and discover the “cherry” was actually an olive. Another time, one of their son’s grandmothers brought her some fresh pears, after peeling them for her and her boys, they bit in to discover this “pear” was actually something called an avocado. Needless to say, Thea does not like olives or avocados to this day, most likely because of the confusing way she was introduced to them.

It was not until their second youngest, Randy (born Randolph) turned 18 that the family achieved their citizenship. Their youngest was born a few years after they arrived in the States, so he was automatically a citizen, but the other kids had to be 18 in order to start the process. Thea didn’t recall if her whole family had to wait until then for all of them to become citizens, or if it was something they waited on so they could go through the process together.

This process included taking special classes, and then being questioned in front of the administration. This was a proud milestone for the whole family, and all of them still have their original study guides, certificates, and American flags after all these years.

Their second oldest, Rudy (born Rudolph), was the only one to not become a citizen, but it was not on a lack of trying on his part. During the Vietnam War, Rudy volunteered to join the U.S. Marines and was promised that be doing so he would be rewarded citizenship. That promise was unfortunately not kept by the government and he was not granted citizenship for his numerous tours.

Despite that let-down, Thea is extremely grateful that they made the decision to immigrate to the United States. The only part that saddens her is having to leave the rest of their family and, in turn, having some of them not agree or support their decision. However, their goals for moving were met, not just for her, but also for Fred and their sons. Their boys received excellent educations, all of them excelling in arithmetic, and some going on to higher education after high school.

Fred, who had to work as a custodian when they first arrived, was able to open up doors for better work opportunities here and by the time he retired he was a supervisor for Southern California Edison and was in charge of maintenance for all of the nuclear reactors in the region. Thea, a proud mother and wife, was able to learn a new language while adjusting to a new environment and is proud of the opportunities that she was able to help provide for her whole family. They were able to buy a car here as well as their first home. The realities of immigrating exceeded their expectations. They all agree that coming to the United States was one of the best decisions they’ve made.

The interview and narrative were done by a student in the Spokane, Washington area.