At first, I thought it was just a cold. He had all the signs of a cold – he coughed at night, he sneezed, had headaches, had a runny nose. I urged my husband to stay home for just a day. He worked as a waiter at the Golden Pheasant at night and ran a small pharmacy during the day. “Please, stay home. Get better. There are many waiters for the restaurant. If you aren’t there, service will just be a little slower for one night.” “But what about my pharmacy?” he questioned “They need me or they will get sick.” “But if you get sick then they will not have you for two weeks. If you take a day off, they will only not have you for a day. Please, take time off” I pleaded with him. “A Friday. You can take two nights off of the restaurant – Friday and Saturday – and then you can have Friday off from the pharmacy and you will have three days to recover but only take a day and a half off.”

My husband was no Eddie Tolan. He was not frail, but he certainly wasn’t fit to work the majority of the day in the winter with a cold and not get worse. A few days later, it wasn’t better, so we visited the doctor. “Ah yes, I fear it is asthma,” the doctor told us as we sat in his small room. “It will keep you at home for several days. Then a few days after just to make sure it doesn’t get worse. 10 days to two weeks I’d say.” When we got back to our small house on Grant Avenue, I was struck by the realization that we had no money.

While Hong On worked, I stayed home and did the same as I did in China. I prepared the meals, sent my daughters Patricia, Sue, and Vivian, and my son Ted to school, and welcomed the four of them home at night for dinner. During the day, I would go to the market down the street and get the necessary vegetables and poultry for our meals. We did not have a great deal of money so I always bargained my way down as I did with my mother back in Canton. My husband would stop by briefly for a few minutes to eat with us before going to the Golden Pheasant on Powell and Geary. He’d come home near midnight and crawl into the bed we shared downstairs in our small apartment. This was my life.

Soon enough, the girls found jobs. Patricia shelled shrimp on the weekends, although she complained it was in a very cold basement with minimal light. Later in the day she would walk several blocks to take up a housekeeping job and act as a nanny for a white family. Vivian found a job working in an office where she quickly learned to type and file things and she occasionally picked prunes or went with Patricia to do housekeeping. Sue, my eldest, found a job at a doctor’s office where she acted as a secretary. My son Harry was older than the rest and made sure they stayed in school for these few weeks. However, Hong On was not getting better. After some talking, we decided to move to a bigger house in a better part of the city, which would hopefully help speed up his recovery. However, this now meant that I would have to walk uphill several times a day to get to my work. I have found a job sewing jeans for a company, Levi’s. This was a very painful job, accompanying a very painful new lifestyle at our new house.

In China, I had my feet bound, and my feet had been ruined as a result. Now, I was expected to walk uphill several times a day – in the morning to get to work, then downhill to come home for lunch, back uphill for work, and downhill for dinner. To get groceries, the nearest market was five blocks away, and I often had to carry the groceries on my own. This pained my arms greatly, because I was not very strong. In China I would stay at home. I didn’t go out much and did even less exercise – I was not accustomed to carrying such heavy loads and walking such long distances with my bound feet. I spent my time in China brushing my hair and learning to be a good housewife. Never had I experience such pain or done so much walking. Furthermore, these new machines were confusing. In China, my mother taught me to sew by hand and make fancy embroidery. Now I was expected to carefully and quickly whisk pieces of rough fabric around on a machine with a needle that went up and down. I was expected to make a certain number of jeans per day. After the first day, I lost track of the number and simply made jeans until I was told to stop.

True to what I told my daughters, I put my earnings in the pot on the table, as did they. I used the money to buy food and a few small gifts for each of them, because Christmas (this new holiday they caught on to from their classmates) was approaching. However, none of us ever kept the money for ourselves to buy new dresses or clothes. How could we? Four girls working was not a whole lot of money, and I worked in a factory where pay was really not good. I am sure they cheated Patricia – she was so young, only 11, and shelled shrimp. Eventually, I dulled out the pain in my feet and my arms got stronger. 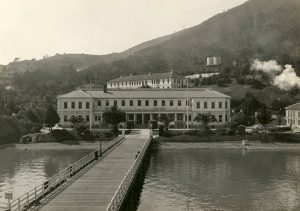 We got by until the very fortunate day when Hong On was well enough to work. The girls and I kept our jobs, because it would allow us to stay in this larger house and maintain some comfort. Even with my husband back at work, we never stopped putting our earnings in the pot, because that pot eventually got my daughters to college and graduate school. Looking back, those few weeks really tested us all. It was the trial to see if coming here in pursuit of a better life and riches was really a good idea. We never got very rich, but I am sure we passed that test with flying colors, and my husband, my daughters, my sons, and I fell back on each other whenever we were faced with trying times.

This story is based on an interview by Tom Galetti, a student at Palo Alto High School.