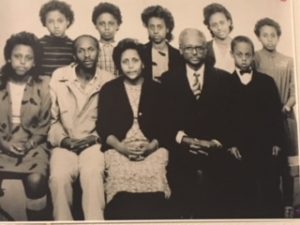 My mom, Eyrus, is in the bottom left. Her mom and dad are in the bottom center, a person away from her. Everyone else are her siblings.

It was a light winter rain in Ethiopia. I was very angry when I left home that day because of what happened yesterday. I wish life was not so difficult, that my dad was not so strict. I thought this because my dad said that I was not allowed to hang out with my friends, after I arrived home late yesterday. It felt like I could not do anything!

Feeling entrapped, I arranged a meet up with my friend. I thought, this is making my legs shake. I am scared. I should not be doing this. My father will punish me, but that is only if he catches us. I straighten my legs, and grab her hand, then we run. We go to another town, instead of school, and have fun. I was not just angry with my dad, but with my school too, because I had to repeat a grade. Later I came back home, wet from the rain. I hope she arrives home safe. I turn around then think, I hope I am safe, that he does not know. My father was standing there. He knew. Someone must have told him. I wish I did not go after all. I was in big trouble, and in the background I saw my mother’s sad face.

Years went on like this. I avoided school and disobeyed my dad, though this was not always so. Me and my siblings would clean his car, and help him with his flower beds. It was now summer, and the plants surrounded our home, and it was beautiful. The air smelled sweet, and the breeze was cooling. We heard little noise, just kids running. “There are so many colors behind this gate.” my sister ChuChu once said in amharic. This made staying home much more easier, as we were not allowed to go out of our gate to hang out with friends. I felt trapped in a way, because of all the colors I am missing out on, but at least I was not trapped with anything horrible. Seeing this, I was reminded of what my older sister told me. She told me that my father had lost his 2 houses, while I was little, and that it happened because of our country’s socialism. People here did not like it. My mom’s parents were also forced to give up a lot of their farmland. I wished I was there now. The green plants poking me. Crops of all sorts. I imagined running and jumping over them, like a gazelle did. I imagined crawling like a lion, in between the sugar cane. I would do this dance out of gratitude. Then I would walk. The soft floor is black and there is a stream. Rocks of various sizes, all of them would be grey, and they would make a crack sound when I throw another rock at them. I could lie down in the dirt and grass, and sink into the earth. No work. The breeze would wake me up, and I would wobble and shake. I would become a home to nature, a vessel of God. In the rich Ethiopian soil, I would do my simple job of living and being the source to all of the fellow vessels of God, all the creatures of nature. Bees and butterflies surround me. I would be a flower of my favorite colors. Fresh, and living. Not rotting away at school so I could just rot at work. I wished that that were true. I told my friend my fantasy, and she said, “Don’t we all” in amharic. She wished so as well.

At that time, I felt hopeless. I wished I did not. Probably I would have an education by now if I had not always felt this way towards school. I was about to graduate senior year of highschool, and I could not find any jobs available. I really wished I worked hard during those school years. I really did. I decided I would go to Kuwait for work. I did not want to, but I needed to. I did not do well in school, and this is the result of it. I was mad at everything, but then, I was mad at myself. They did not want me to go through this. My dad and teachers and siblings. They caged me and bossed me, so I would not end up this way. I am tired of wishing, like they are impossible. I need to work, even if I do not want to. God made us, so we could work. So we could praise him; he made us this way. Like my worship, I must go. I must work. For God.

I flew to Kuwait. While I flew, I thought back to the crying faces I saw and I saw my own crying face. Grasping each other, we made a pool of water. A river, like our Nile. Waterfalls, our tears were like the bullets that flew during the war. The war Solomon, my brother, avoided. Just like the socialism’s reach for young men for war, my brothers, my sisters, my mom, and even my dad, my friends too, they all grasped me. I grasped them back, all my worries and fear poured into them. More tears fell as a result. I let them go, I did not want them to worry no more. I was an adult, so I had to let go. I went to the bathroom and there was a mirror. I saw my face squeezed and boogers oozing out of my nose. My brown face looked reddish and my hair was pointed outwards like the sun because of the way I slept. I cried, a loud loud cry at the figure I saw. At that point, I could no longer care about how others would think, but instead thought, how can I be beautiful if I cannot work?

When I arrived in Kuwait, I was tired from working long hours, learning Arabic, and getting bossed around at the hotel. It was not the best experience, but it was not the worst. Some encounters made it easy for me to continue. First my best friend. She was Ethiopian, and she now works at Emirate Airlines. She had a contagious laugh. Her abnormal “hahas” were what woke up the other workers at the hotel from their sleep, and it awoke me of any negative feelings I had. Because of her laugh, I would tell her a lot of jokes. One time when we went to the beach, I fell tripped over a rock and my face fell in the sand. I had just applied sunscreen. When I got up there was sand sticking on the sunscreen. “Ha,” a long pause until her storm of laughter began, “Ha, h,h,h,ha ha, ha, haaaaaaaa.” This went on for a few minutes. Another friend I had was the ocean. I miss sitting by the ocean. I love, loved, it, but despite this I do not think I could live in Kuwait forever. Despite the sand, warming my soles and letting me sink and sulk and cry and rest. I would see the city on the other side, and scream at the ocean. The air was hot. If it was ever too much, I would jump in the ocean. The water was clear and it felt like some sort of dress despite my low state in life. It did not matter. The water awoke me from the struggles of life, whether I was in it or out. The ocean was always something I could look forward to in those days. Finally, I met my husband, who I married in America, and had 2 kids with. We could not go to Ethiopia, because in Ethiopia neither of us would be able to get jobs.

The journey to Kuwait was similar to that of my journey to America. I felt and looked miserable, but for a new reason. Kids. Prince, my oldest, learned to walk really fast. And then he learned to run. And then he was running into first class. And then I was screaming as I chased down the aisle to get him. “Prince!!” I screamed. The younger one, Corey, was sleeping in his dad’s arms until I started screaming. So now there were two screaming Ethiopians on the plane going to America.

When arriving in America, I met my husband’s family and married him. They were pretty nice and had big laughs. They were fun to be around. I then moved to California, got divorced, and my husband left for a few years. Something that I learned once coming here(especially on my own), was that America was not an easy place to live in. The houses are very expensive here. In Kuwait, the company would pay for your housing. Because of the high prices, we were homeless for a while, but I am proud I made it through and am supporting my kids so that they can go to college and get a great education. Another difficulty I have is fear of what is happening to my kids when I am not there. I worry that they might get introduced to drugs and end up on the streets. That they might get in a relationship at such a young age. I worry because of the food they eat here. These colored snacks, red, orange, chips. Pink yogurt. Sweets and such that my kids are addicted to. I wish America did not have all this crazy stuff. 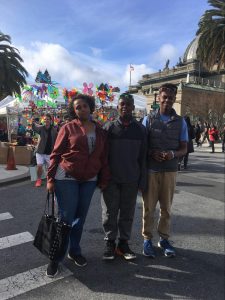 Personally, I wished I had a good education earlier, so I would have a better life. After I am done with the kids, I plan on getting a good education and helping the homeless. Maybe going to Africa and building a house or build a business, because I like fashion. I want to help the homeless not only from my own experience, but also because of all the suffering kids I saw in Ethiopia. So many, many kids. A lot of kids. Just another wish I am running towards.

The story of Eyrusalem Walker was written and recorded by her son.